NIEHS research on the virus aims to reveal structures suitable for targeted development of potential vaccines and treatments.

Borgnia said that the shape of a protein is closely related to its function, so discovering the shape with tools such as cryo-EM helps scientists gain insight to the job it performs. (Photo courtesy of Steve McCaw)

The NIEHS cryo-electron microscopy (cryo-EM) facility, led by Mario Borgnia, Ph.D., is providing key support to the Duke Human Vaccine Institute (DHVI) in the fight against the SARS-Cov-2 virus, which produces COVID-19. On March 23, Borgnia spoke with the Environmental Factor about the research he conducts with Duke’s Priyamvada Acharya, Ph.D.

Cryo-EM is an advanced microscopy platform launched at NIEHS in 2017 as part of the Molecular Microscopy Consortium (consortium), along with Duke and the University of North Carolina at Chapel Hill.

“I am so glad I am we invested in cryo-EM technology,” said NIEHS Scientific Director Darryl Zeldin, M.D. “Mario is doing an outstanding job leading the Molecular Microscopy Consortium, to provide support for the entire region. Our investment is paying off as Mario is working collaboratively with scientists at DHVI to facilitate development of a vaccine against SARS-Cov-2.”

Environmental Factor: Why are you focusing on the so-called spikes of the virus structure?
Mario Borgnia: The spikes that form the so-called corona are viral proteins. Members of the coronavirus family bud out new viral particles from an infected cell by pinching a small bubble of the cell’s own membrane.

This envelope surrounds the virus’ genetic material, acting as a cloak to prevent detection. The body’s immune system does not recognize the virus as foreign so it does not mount a fight. Yet the virus at this point is still isolated in its own bubble. 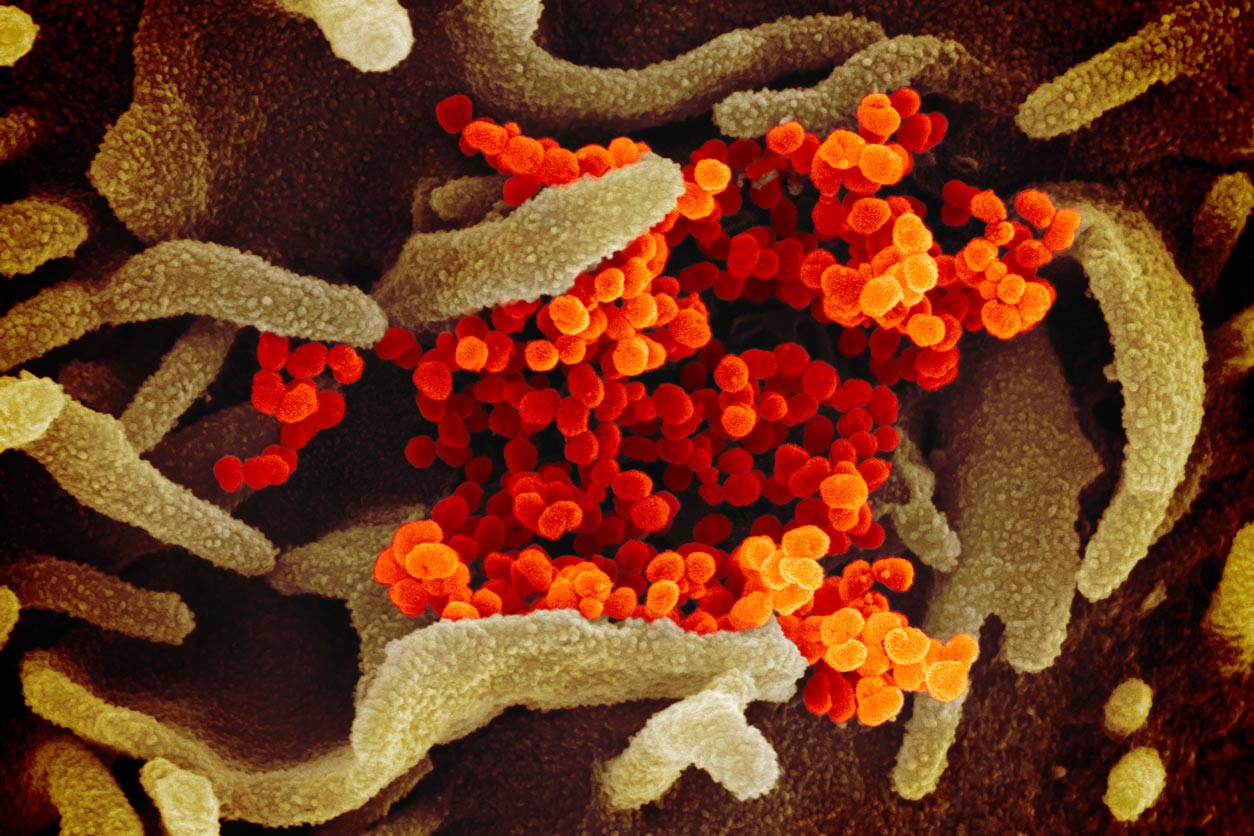 Scanning electron microscope image of SARS-CoV-2, orange, isolated from a patient in the U.S., emerging from the surface of cells, green, that were cultured in the lab. (Photo courtesy of National Institute of Allergy and Infectious Diseases Rocky Mountain Laboratories)

Here is where the spike comes into play. If you think of a key and lock, the spike is the key. The lock is a receptor in the human cell. The virus attaches the key in a new cell’s lock. It then fuses its envelope with the cell membrane and injects its genetic material into the cell.

But the spikes are also the Achilles heel of the virus, because the immune system can recognize them as foreign material.

During the early stages of viral infection, the body begins generating antibodies against the spikes, or any portion it recognizes as foreign. If it does this faster than the virus replicates in the body, we do not get really sick. The idea of a vaccine is to prime the immune system with the spike protein to increase the concentration of antibodies against it, even before the body detects a live virus.

Once our immune system knows the disease, it has the advantage and can drive the virus away. The goal of our work is to generate a version of the spike that prompts the body to generate effective antibodies.

3D print of SARS-CoV-2 virus particle, which causes COVID-19. The surface is covered with spike proteins, red, that enable the virus to enter and infect human cells. (Photo courtesy of NIH)

This is very different from HIV, for example, which is much more complicated (see sidebar). HIV mutates in the body so that infected people rarely develop protective immunity, although we are learning tricks to teach the immune system to fight HIV as well.

A major goal in the effort to defeat this pandemic is finding a way to interfere with the process of cellular infection. A treatment would block the virus’s recognition of the target receptor in those who are sick. A vaccine would teach the immune system to make antibodies to neutralize the spikes before disease develops. 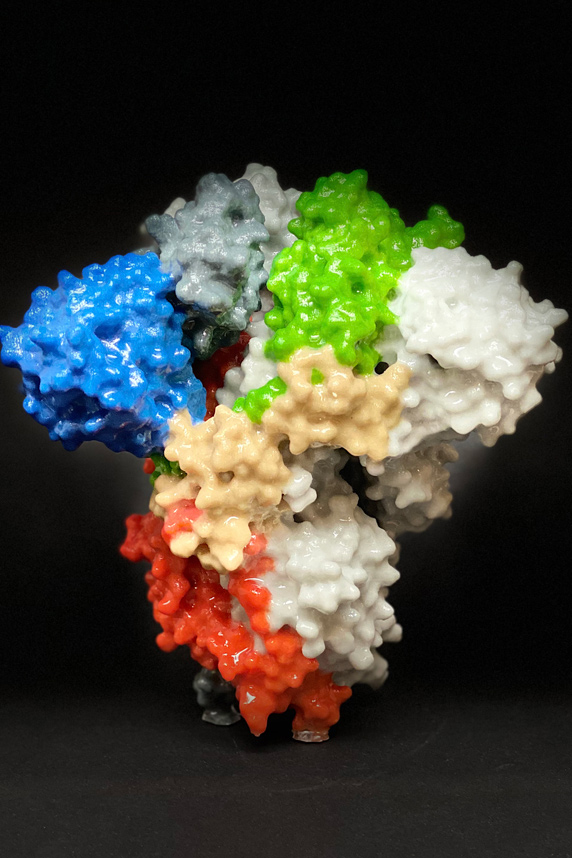 EF: Where in the process are you right now?
MB: Dr. Acharya’s team is working closely with Allen Hsu, here at NIEHS, to optimize cryo-EM grids for SARS-CoV-2 spike samples using the NIEHS Talos Arctica microscope. These are then imaged using the Duke Titan Krios microscope. Dr. Acharya’s group is working around the clock together with my team to further optimize the specimens.

EF: Can you explain what optimizing the specimens involves?
MB: To get a structure using cryo-EM, you gather tens of thousands of images of the protein, then average them to obtain a 3D structure. To do this, the proteins are frozen in a thin layer of ice on a grid, by a process known as vitrification.

By optimizing the vitrification conditions, we can produce cryo-EM grids suitable for high resolution imaging. We look forward to continuing our work with Dr. Acharya’s group to optimize samples of spike variants and complexes for imaging.

EF: Is there anything else you want to add?
MB: We have been overwhelmed by the interest in our work, but most of the credit belongs to the folks at DHVI who originated all this. That said, this work could not have happened so quickly without the collaboration that we put together with the consortium. And Dr. Zeldin gave incredible support to make cryo-EM happen here in the Research Triangle Park area via the consortium.

Over the past decade, Borgnia has used cryo-EM to characterize the envelope spike of another pandemic virus, HIV.

“We initially characterized the native spike on the virus by cryo-electron tomography. These viruses cannot be crystallized and therefore, cryo-EM is the only structural method available to study them.

“The spike proteins of both the novel coronavirus and HIV have a transmembrane domain that anchors them to the envelope. Soluble forms of the HIV spike have been engineered by truncating that membrane anchor.

“These soluble forms were also resistant to crystallization. Working with lab of Sriram Subramanium, Ph.D., when he was at the National Cancer Institute, we used single particle cryo-EM to show that these truncated forms mimic the changes that occur in the original spike.

“DHVI Director Bart Haynes, M.D. was one of the initial drivers for the establishment of the Molecular Microscopy Consortium in mid 2017. One year later, Dr. Acharya moved from the NIH Vaccine Research Center to head the structural biology division at DHVI.

“We developed a very fruitful collaboration that led to a number of high-profile publications on HIV. 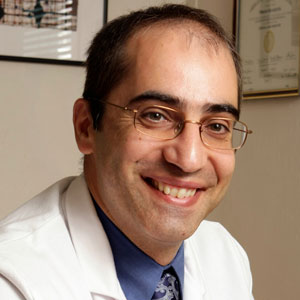 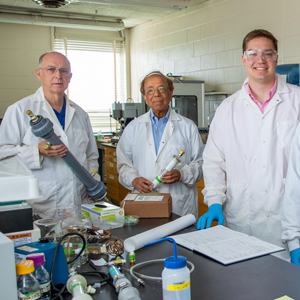 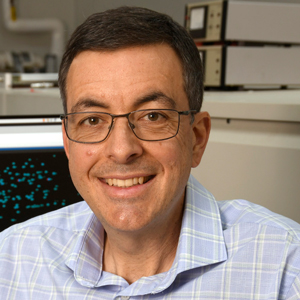