Finding perspectives and insight beyond NIEHS

NIH Postbac Poster Day highlights the wide range of research that postbacs across NIH are doing, and the event gives postbacs valuable experience in communication and networking skills. “It was interesting to get feedback from people outside of NIEHS who aren’t as familiar with my research,” Mesev noted. “Getting perspectives from people with a chemistry background instead of a biology background, for example, helped me look at my work in a different light.”

The posters were judged by postdoctoral fellows, graduate students, and staff scientists, and the top 20 percent received Outstanding Poster Awards. Tammy Collins, Ph.D., director of the NIEHS Office of Fellows’ Career Development (OFCD), addressed the importance of connecting postbacs with the NIH campus. “The postbacs are a very energetic group, especially in terms of being involved at NIEHS and creating a sense of community amongst themselves,” she said. “We’ve been making an effort to connect this postbac community with Bethesda, to ensure that they feel part of the broader NIH postbac experience.” 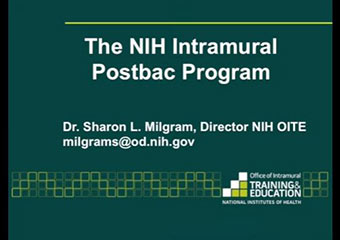 Watch this video from OITE about the NIH postbac training program and how to apply for it. (32:22)

Collin Johnson, who will be starting a Ph.D. program this fall at Baylor College of Medicine in Texas, praised the value of both the event and the postbac program. “Poster Day was a great way to summarize my two years of research and the connections I’ve made, all in the environment of NIH,” he said. “Being a postbac has definitely helped better prepare me for doing research in grad school.”

NIEHS currently has 22 postbac fellows working in labs across the institute. “The postbac program has grown significantly in the past couple of years,” said Collins. “We have the most [postbacs] we’ve ever had.” 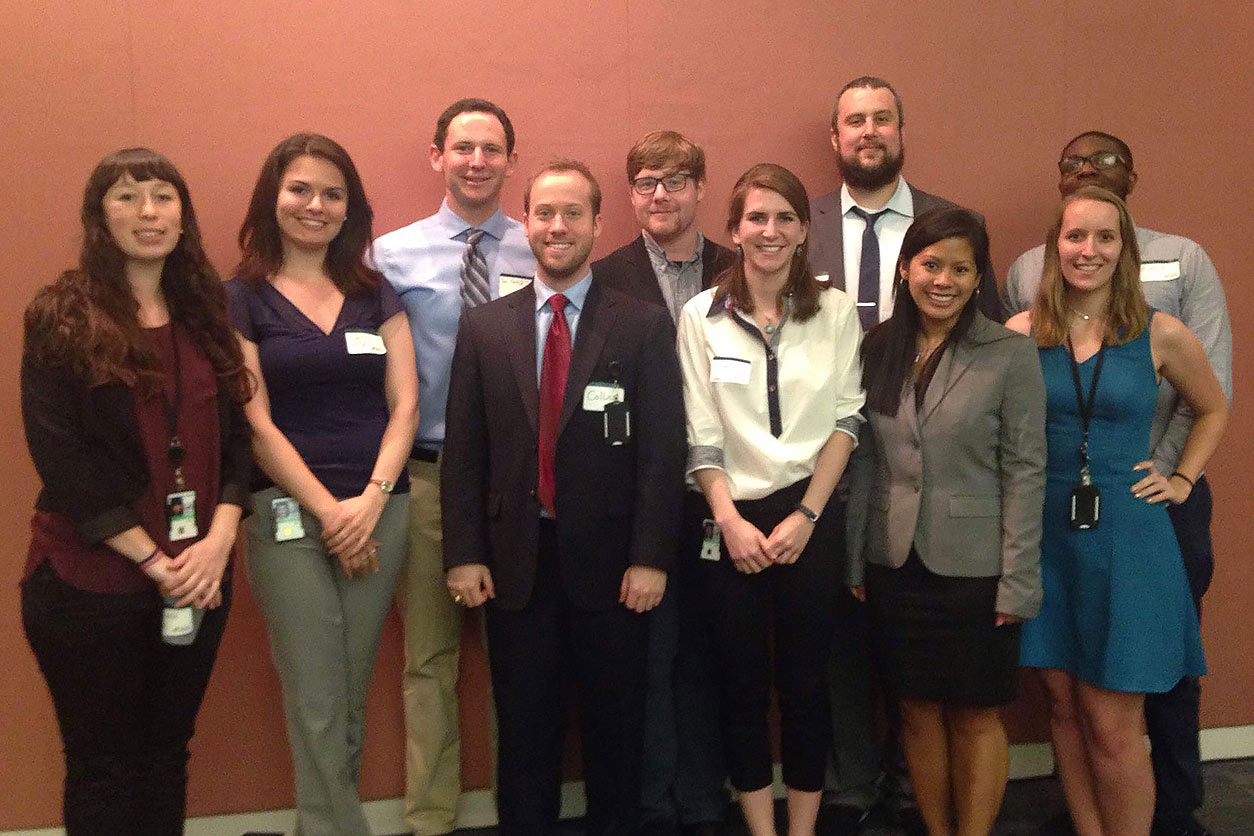 The NIEHS fellows presenting posters at the event are engaged in varied research pursuits across the institute.

David Banks has studied “Ligand Activation of Lysophosphatidic Acid 1 Receptor Reduces P-glycoprotein Transport Activity at the Blood-Brain Barrier.” He graduated from the University of North Carolina (UNC) at Greensboro and is mentored by Ronald Cannon, Ph.D., and David Miller, Ph.D., in the Intracellular Regulation Group of the Signal Transduction Laboratory.

Richard Gilliam, a graduate of Saint Augustine’s University presented an “Analysis of NIEHS Postdoctoral Alumni Career Outcomes.” He was mentored by Tammy Collins, Ph.D., in OFCD during the summer of 2015. Presently, he is mentored by Jean Harry, Ph.D., head of the NTP Neurotoxicology Group.

Collin Johnson studied “Novel Effects of TLR5 in Lung Injury and Therapeutic Implications.” After graduating from the University of Texas at Austin, he began his fellowship mentored by Stavros Garantziotis, M.D., medical director of the NIEHS Clinical Research Unit.

Sydney Lierz presented “Evaluating Physiological Roles of ER-alpha Transactivation Domains in Estrogen-mediated Metabolic regulation.” A graduate of North Carolina State University, she is mentored by Ken Korach, Ph.D., head of the Reproductive and Developmental Biology Laboratory and lead researcher in the Receptor Biology Group, and Yukitomo Arao, Ph.D., staff scientist in the group.

Miranda Lyons-Cohen, a graduate of Reed College in Portland, Oregon, studied “Localization and Trafficking of Pulmonary Dendritic Cells During Early Stages of Airway Inflammation.” She is mentored by Donald Cook, Ph.D., head of the Immunogenetics Group in the Immunity, Inflammation, and Disease Laboratory, and Hideki Nakano, Ph.D., staff scientist in the group.

Emily Mesev researched “Short-Term Exposure to Long-Chain Ceramide 1-Phosphate Induces P-Glycoprotein Activity at the Blood-Brain Barrier.” After graduating from Grinnell College in Iowa, she began working with Cannon and Miller in the Intracellular Regulation Group of the Signal Transduction Laboratory.

Thomas Neufeld, a graduate of Duke University, presented his research on “Differential Activation of a Mouse Estrogen Receptor Beta Isoform (mERbeta2) with Endocrine-Disrupting Chemicals (EDCs) in an In Vitro Cell Model.” He is mentored by Korach and biologist Yin Li, Ph.D., in the Receptor Biology Group of the Reproductive and Development Biology Laboratory. 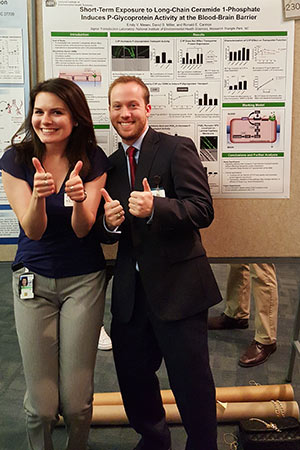 Mesev and Johnson shared some of the upbeat energy that characterized the NIH Postbac Poster Day. 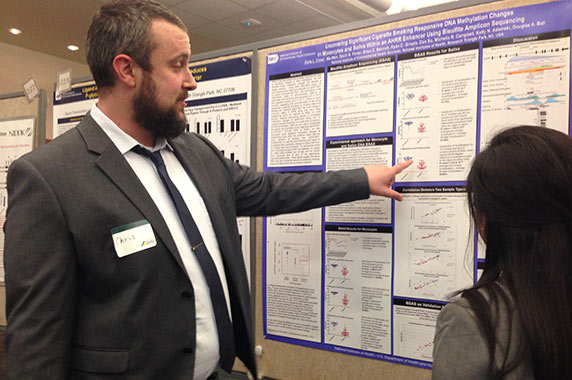 Crowl, left, explained his research to Gillera. Both enjoyed the chance to view research of postbacs from across NIH. 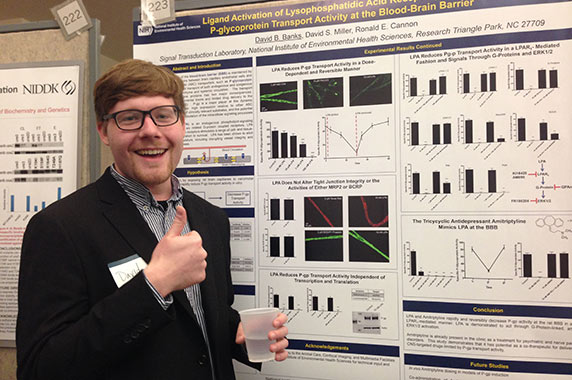 Banks is one of three postbacs who is enhancing his training experience by volunteering as a writer for the Environmental Factor. 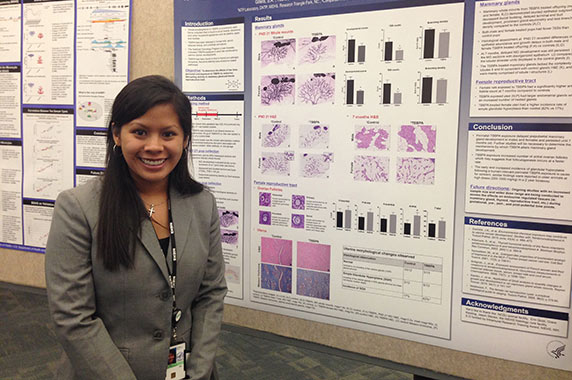 Gillera was enthusiastic about the opportunity to visit the main NIH campus in Bethesda.