David Gee, Ph.D., shared lessons learned from case studies in which identification and regulation of harmful products happened too late.

Europe and the United States handle the identification and regulation of harmful substances differently. What they have in common, according to David Gee, retired senior advisor at the European Environment Agency and current visiting fellow at Brunel University in London, are the results — banning harmful products and substances always happens later than it should.

For his May 11 talk, “Late Lessons from Early Warnings of Hazards from Chemicals, Food Additives, and Radiation, 1896-2013,” Gee drew on a two-volume work of the same name, for which he served as an editor and author.

The European Environment Agency published volume one in 2001. Volume two, which came out in 2013, has 90 authors and co-authors, including NIEHS grantees Philippe Grandjean, D.M.Sc., M.D., adjunct professor at the Harvard School of Public Health, and Joel Tickner, Sc.D., associate professor at the University of Massachusetts, Lowell.

“We never underestimate the nature and diversity of the harm,” Gee said of delays in addressing hazardous products (see text box). Delay increases the chance of harm, and may also allow technological monopolies to become established, squeezing out alternatives, he asserted. He cited the report’s case study on leaded gasoline. Its harmful qualities were known in 1925, but it was not banned in the U.S. until 1996.

“David’s talk went to the heart of what we do at NIEHS and NTP,” said NIEHS and National Toxicology Program (NTP) Director Linda Birnbaum, Ph.D. “We are all about prevention, and we make decisions based on both on systematic reviews and what we do in the NTP Office of Health Assessment and Translation [OHAT], where we evaluate the strength of the evidence.”

OHAT Deputy Division Director for Analysis Kristina Thayer, Ph.D., agreed. “Many of the case studies that David presented could be helpful for testing a structured framework of review.”

According to Gee, science itself sometimes discourages timely action by setting the bar for evidence of harm higher than is prudent to safeguard public health. With things like lead or asbestos exposure, effects accumulate over time, but it is still a good idea to act as expeditiously as possible. “No evidence of harm is not the same as evidence of no harm,” Gee said.

Some countries have turned to what is known as anticipatory research, which anticipates risks from new technologies and products. For example, in the Netherlands, 15 percent of money spent on developing and promoting nanotechnology is directed toward anticipatory research. The idea is to help develop the technology in a way that avoids harm and possible product bans later.

Gee acknowledged the perception that this proactive approach may stifle innovation, but he said that the opposite is actually true. Precautionary action through smart regulation and tax policies always stimulates markets, he said, by favoring more reliable technology with longer commercial life.

“Regulations have had a favorable and lasting effect on the rate of innovation in the European Union,” he said. “And if you act 10, 15, 25 years earlier, the innovations appear earlier.”

Gee also made the case for creating a new Nobel prize in transdisciplinary science, to honor scientists from different disciplines cooperating in key research.

“This would encourage breakthroughs [and] would send a powerful signal to all academic and research institutes,” Gee said.

Years elapse between warning and action 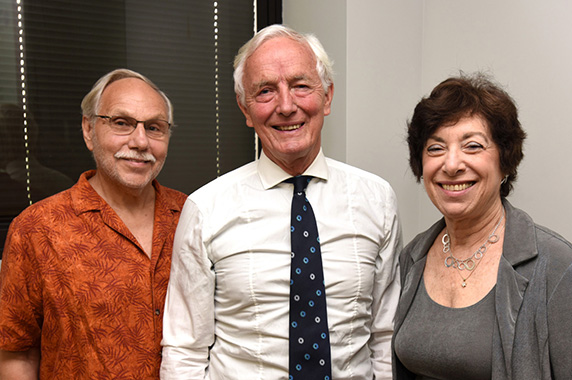 “Several of the things that David touched on hit very hard, especially trying to get out a public health message with less than perfect information,” said Birnbaum, right, shown with Gee, center, and Jerry Heindel, Ph.D., NIEHS health scientist administrator.

Weighing in on risk

Gee recommended a tiered approach to standards of evidence required before taking action. The amount of evidence needed would be based on the extent of the potential hazards.

“I like the tiered nature of this approach,” said Birnbaum. “It’s helpful in making decisions in situations where you don’t have to have all the information.”