Two groups based at NIEHS are the recipients of the 2016 U.S. Department of Health and Human Services (HHS) Green Champion awards for sustainability and stewardship projects. Thanks to their efforts, the NIEHS campus is safer, cleaner, and more energy efficient.

“We’re very proud of what these employees have accomplished,” said NIEHS and National Toxicology Program Director Linda Birnbaum, Ph.D. “That [work at the Burden’s Creek site] was really a very intensive cleanup, and these new lights not only save money, but a lot of the old lights were recycled.”

The cleanup at Burden’s Creek also set the stage for the groundbreaking April 15 of a new, secure, net-zero energy warehouse expected to open in 2017 (see story).

Located at the remote northern end of the NIEHS campus, Burden’s Creek was the site of temporary offices, housed in trailers, for NIEHS employees during construction of the main campus. The trailers also served as additional storage space, and veteran employees referred to the site as Trailer City.

The modular buildings contained potentially hazardous materials, which led to challenges in their disposal. The NIEHS project team oversaw the recycling of 65 tons of metal, 120 tons of concrete, 200 tons of construction and demolition debris, 720 fluorescent light bulbs, 12 mercury thermostats, and 12 smoke detectors, as well as the recapture of 63 pounds of Freon.

The Project Team was made up of NIEHS Office of Management employees and retired employees, including Acting Associate Director Chris Long and staffers Debra Del Corral, Christopher Hunt, Veevee Shropshire, Bill Steinmetz, Clyde Hasty, and Scott Merkle, who is now retired. Another member, Joseph Shealey, is part of the National Institutes of Health (NIH) Office of Research Facilities (ORF) Facilities Management Branch, based at NIEHS.

“The NIEHS Project Team used innovation and dedication to recycle the bulk of waste materials located at the site,” said the HHS announcement, which made the award under the category of Environmental Stewardship. HHS also praised the team’s extensive diligence in the face of time pressures, budget constraints, and the volatile recycling market.

Let there be light

NIEHS employees enjoy a 520-acre heavily wooded campus in Research Triangle Park, North Carolina. During the day, its natural beauty and seclusion are welcome, but at night, stretches of darkness can pose a security threat, especially for people walking or jogging.

With a goal of improving lighting and conserving energy, a team from ORF that is stationed at NIEHS installed a 60 kilowatt photovoltaic system to capture solar energy and converted all exterior roadway and walkway lighting from metal halide lamps to light-emitting diode (LED) units, a brighter and more energy efficient technology. “The project resulted in a net energy savings of approximately 300,000 kilowatt hours and $18,000 in utility cost annually, as well as the recycling of approximately 300 tons of construction debris,” said the HHS announcement.

Looking to future improvements to enhance pedestrian safety, on May 16, Birnbaum announced plans to install sidewalks beside campus roadways.

NIEHS — the environmental institute in every sense of the term

As Birnbaum has said many times during her tenure, it is especially appropriate that NIEHS, with its focus on environmental health, should also place a premium on sustainability.

The two awards to employee groups on the NIEHS campus are but the most recent of a string of Green Champion awards. The Green Champion awards honor groups and individuals across HHS operating divisions, which include tens of thousands of employees at such organizations as the Public Health Service, the Centers for Disease Control and Prevention, the Food and Drug Administration, NIH, and the Indian Health Service.

There were 36 individual and group awards in 2016, with seven, or nearly one-fifth of them, going to NIH offices, institutes, and centers. NIEHS employees have been recognized with Green Champion awards in seven of the eight years since the program was established in response to a 2009 Executive Order from President Obama.

By any standard, this year’s two awards to employees at the NIEHS campus constitute a mark of high distinction for the institute’s sustainability efforts. 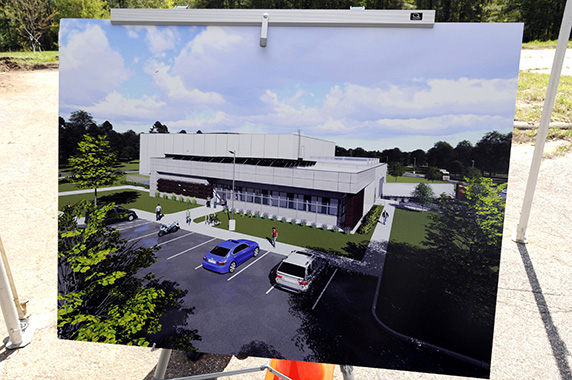 Attendees at the warehouse groundbreaking viewed an artist’s rendering of how the Burden’s Creek site will look when construction and landscaping are completed next year. 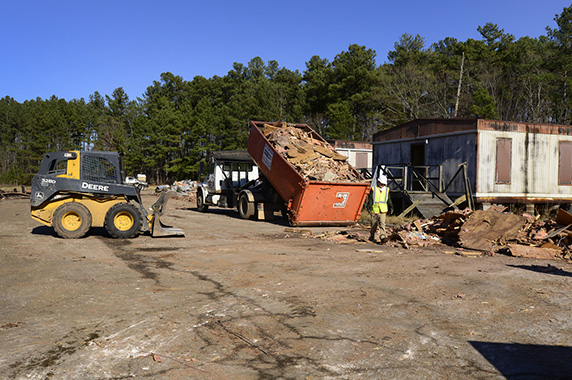 Demolition was only part of the job. Materials were then sorted before being hauled away for appropriate recycling. 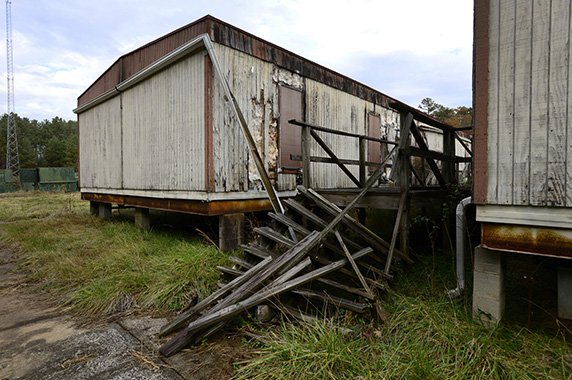 For three decades, the modular units and their discarded contents at the Burden’s Creek site were out sight and out of mind. 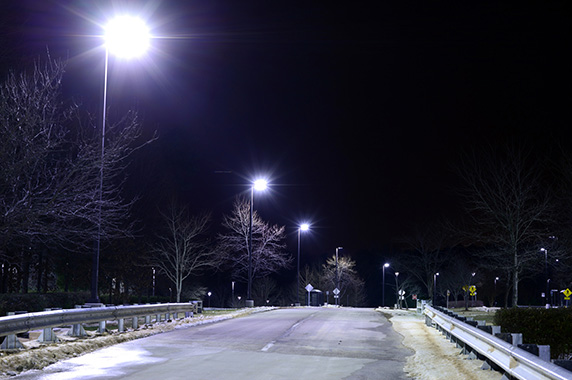 The bright LED units spread light farther afield to reach more areas between the lamps and beside the roadway. 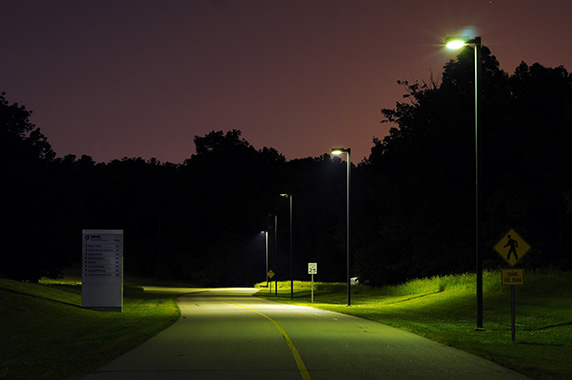 In contrast, the older metal halide lights illuminated a small area directly beneath the lamps, leaving sizable patches of darkness outside their range.