NIEHS grantees discussed new research about how ocean and lake environments affect human health at an April 13-14 meeting at the institute. The Oceans and Human Health (OHH) research program, which has led to new drug discovery and tools for prediction of oceanic harmful algal blooms, has expanded to study blooms in the Great Lakes and health impacts from pollutants.

“Our oceans and coasts affect us, and we affect them,” said Fred Tyson, Ph.D., OHH program director at NIEHS. “This program has united biomedical and oceanographic scientists to address public health problems, such as harmful algal blooms and marine pollution, which affect us through our drinking water and seafood, as well as aerosolized toxins.”

NIEHS has supported research related to conditions in the oceans and Great Lakes since the 1970s. In 2004, NIEHS and the National Science Foundation (NSF) began the joint OHH program, which now funds research around the country.

When environmental conditions favor vigorous algae growth, an algal bloom can occur. Accurately forecasting these blooms helps prevent illness from exposure to algal toxins in seafood, water, and even the air. John Stegeman, Ph.D., from the Woods Hole Oceanographic Institute (WHOI) and a previous NIEHS Keystone lecturer, said that scientists study environmental conditions and algal biology in Salt Pond, a small natural pond in Maine, to improve the models that forecast blooms in the Gulf of Maine.

Stegeman’s colleague, Don Anderson, Ph.D., also from WHOI, added that they are following the complete annual bloom cycle of the algae Alexandrium fundyense in Salt Pond. Researchers have found that in deep waters, the algae seem to bloom based on an internal clock, whereas in shallow waters, conditions such as temperature may trigger blooms. They have also found that Alexandrium fundyense, which can cause paralytic shellfish poisoning, is more toxic in natural settings than in laboratory studies, making field monitoring essential.

On the Pacific coast, the organism Pseudo-nitzschia causes red tides, named for the reddish-brown color of blooms. Pseudo-nitzschia releases the toxin domoic acid, which can cause gastrointestinal and neurological symptoms. Lynn Grattan, Ph.D., of the University of Maryland School of Medicine, works with three Native American tribes in Washington state to study possible health effects from long-term, low-level exposure to domoic acid. They found that adults who frequently ate razor clams, which are known to accumulate domoic acid, suffered from memory decline. They are now studying potential impacts on young children from exposure in the womb or during breastfeeding.

Todd Miller, Ph.D., from the University of Wisconsin, Milwaukee, is studying algal blooms in lakes that provide drinking water. His team found that algal toxin levels follow a different pattern than algal blooms, so it may be important to monitor both toxins and blooms. They are also studying whether water treatment plants are able to remove the toxins.

“We have not finished analyzing all of our drinking water samples yet, but so far, detection of algal toxins in the finished drinking water seems to be rare and mostly below the U.S. Environmental Protection Agency guideline values,” Miller said.

After an algal bloom in Lake Erie contaminated the Toledo, Ohio, water system in 2014, Judy Westrick, Ph.D., from Wayne State University, studied what went wrong. Her research showed that faulty analytical methods and insufficient quality control procedures contributed to the incident. She also found that algal growth may occur during water treatment and recommended carefully monitoring of the finished water.

Several scientists mentioned climate change as an important factor in the study of oceans and human health. Celia Chen, Ph.D., from Dartmouth College, demonstrated that in warmer conditions, more methylmercury, a neurotoxin, accumulates in seafood.

Miller said that harmful algal blooms are likely to become more frequent in U.S. lakes and oceans. “It is likely that toxin levels in aquatic ecosystems used for drinking water will increase, not decrease, putting greater pressures on the sustainability of drinking water production from surface waters,” he said. 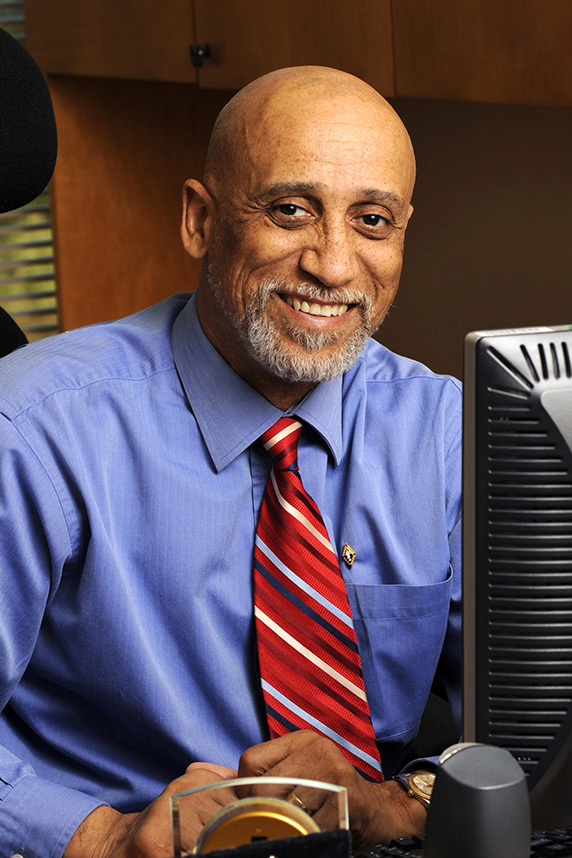 “It is vital that we consider the health of vulnerable populations, such as the elderly, children, Native Americans, and low-income populations,” Tyson said of the oceans program.

Scientists at the Scripps Institution of Oceanography have found that persistent organic pollutants (POPs) in seafood can prevent P-glycoprotein, a transporter protein in the cell membrane, from removing foreign chemicals. This is the first demonstration that POPs limit this essential clearing mechanism, in both mouse and human cells, which may allow pollutants to linger and cause cellular damage.

POPs are man-made chemicals that do not break down in the environment and can accumulate in animals, including fish and other seafood.

“If we can figure out what makes POPs so persistent, then hopefully we can design them differently so they don’t accumulate in food and in our bodies,” said Amro Hamdoun, Ph.D., senior author of the study. 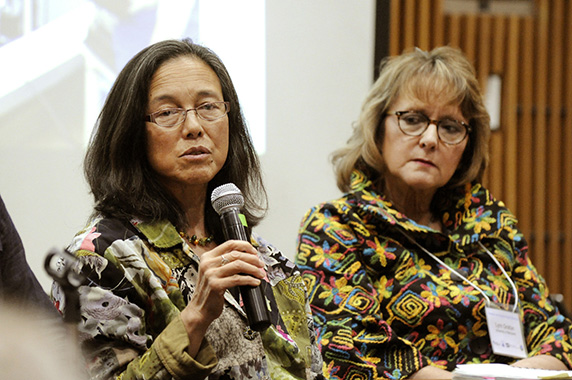 Chen, left, said that nanoparticles and plastics are an emerging concern in aquatic ecosystems because they may contaminate the food web. Grattan, right, looked on.