The NIEHS Scholars Connect Spring Symposium recognized the four students completing their year and named one as Outstanding NSCP Scholar.

The April 18 NIEHS Scholars Connect Program (NSCP) spring symposium needed no gowns or tasseled caps to convey the look and feel of a joyful graduation ceremony, recognizing the four young scholars who completed their year-long participation in the program. Following research presentations by the students, organizers named the winner of the Outstanding NSCP Scholar Award.

This was the fourth year for the program, which attracts students from area colleges and universities to spend an academic year working on their own research projects with mentors in NIEHS labs. The program aims to increase interest in environmental health science careers in young people from underrepresented groups, although the program is open to any student who applies.

The program begins each year in early June, with an orientation and multiday science boot camp that gives the students a foundation for lab work. They work full time in their assigned lab through the summer, and part time during the fall and spring terms. The scholars present their research at a poster session in late July and a roundtable talk during the fall.

Along with their own research, participants are offered valuable experiences throughout the year. “Scholars have an opportunity to engage in seminars, including meetings with the top leadership team, to talk with them about their career paths, their educational choices, and how they got to where they are, and to ask questions that will help the scholars make more informed choices as they go along,” explained Office of Scientific Education and Diversity Director Ericka Reid, Ph.D., who directs the NSCP.

This was the second year an outstanding scholar was recognized for excellence by mentors and peers. This year’s winner, Lucas Van Gorder, also received Best Poster and Best Roundtable Talk for presentations earlier in the year.

Thanking his lab colleagues and mentors, he said the program had set him on a firm path to the future. “I’ll be going to the University of Pennsylvania for gene therapy and vaccines. I had an interest in the field, but didn’t think that I had the ability to do it,” he said. “Coming here and working with viruses showed me that I can.”

Session chair Pierre Bushel, Ph.D., a staff scientist with the Biostatistics and Computational Biology Branch, provided an optimistic note as he closed the ceremony.

“I think we can be sure that the future of science is in good hands,” he said. The next NSCP cohort will start in June.

Maura Schwartz, a junior at NCSU, presented “The Crucial Importance of the RNA Component of Mitochondrial RNA Processing Endoribonuclease (RMRP).” Schwartz was mentored by Shepherd Schurman, M.D., and Cindy Innes from the Clinical Research Branch. She focused on the role of the RMRP gene in a rare disease called cartilage hair hypoplasia, and worked to identify disease characteristics in the North Carolina population and developed a knockout model in a mouse embryonic fibroblast cell line.

Porscha Walton, a senior at SAU, performed a “Systematic Review of Progestin Use During Pregnancy and Its Postpartum Health Effects on the Offspring.” Her mentors were Kris Thayer, Ph.D., Kembra Howdeshell, Ph.D., and Abee Boyles, Ph.D., from the NTP Office of Health Assessment and Translation. Walton identified uses of synthetic progesterone drugs and categorized adverse outcomes that result from exposure during development of the fetus. Walton also won a travel award to present her poster at ABRCMS. 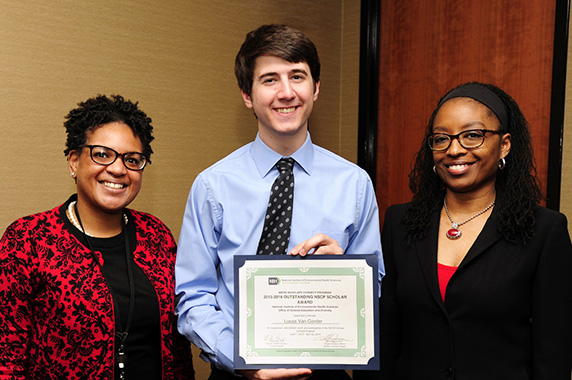 “I learned a lot about not only my research, but my interests as well,” said Outstanding Scholar Van Gorder, center, flanked by NSCP Coordinator Erica Rogers, Ph.D., left, and Reid. 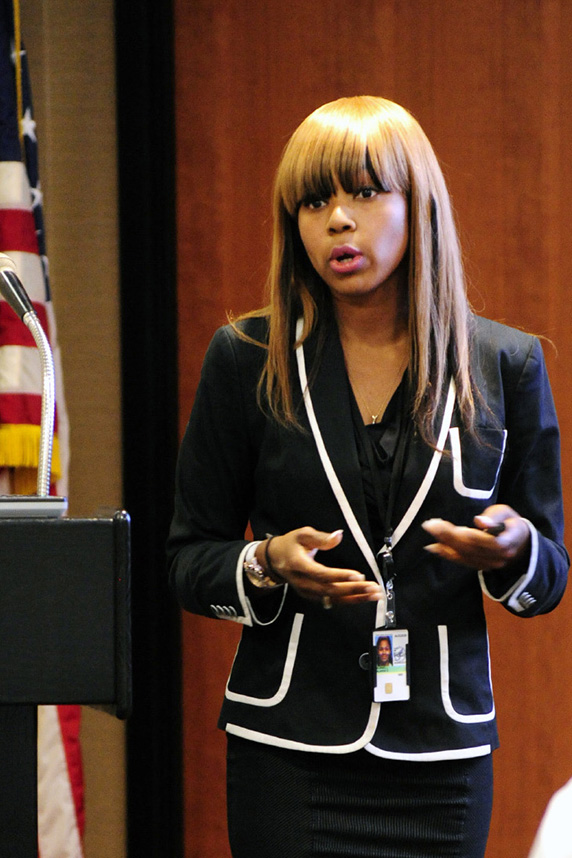 “Everyone was busy…but they always had time to make sure I was doing what I was supposed to do and that I understood the research that was going on,” Burwell said. 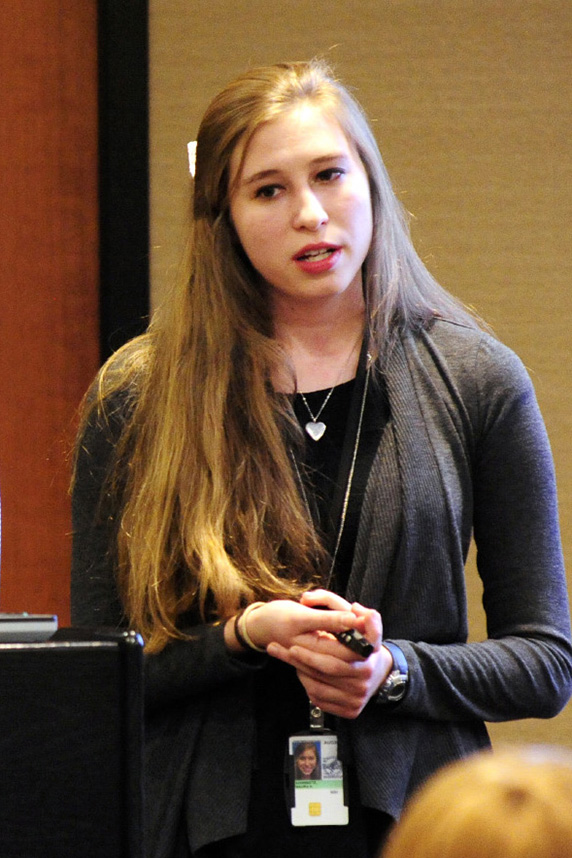 “I’d like to thank you for all of the experiences you gave me, and all of the guidance,” said Schwartz, the only junior. “I loved it so much that I’m going to come back.” 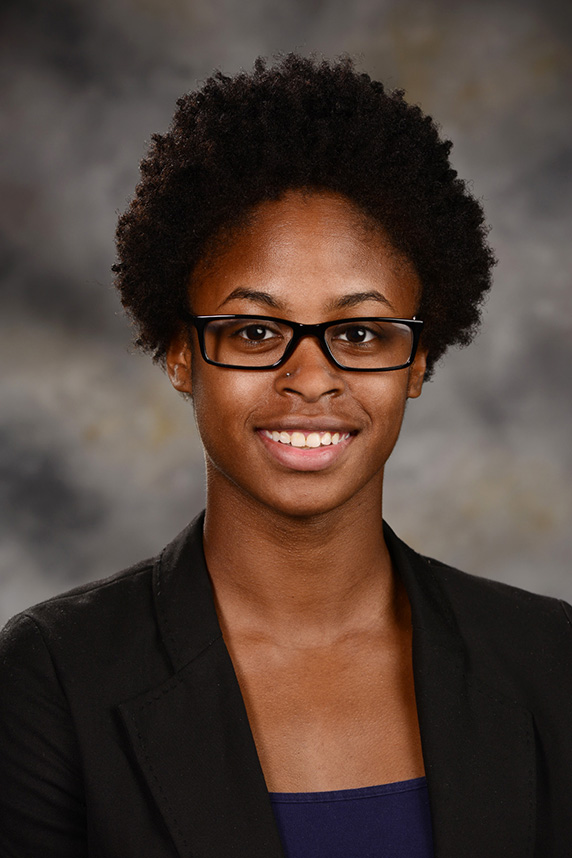 Walton was unable to attend the symposium, so Boyles accepted the certificate of completion on her behalf. 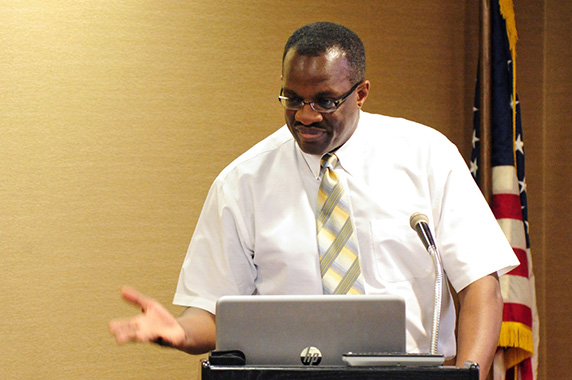 “I’m always delighted to participate in any way I can with Scholars Connect,” Bushel said. “I know how important it is, and how fortunate we are to have highly motivated students like these.” 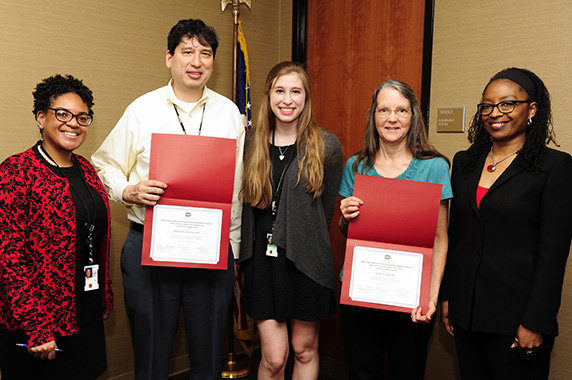 The NSCP scholars presented their mentors with certificates of appreciation. Schwartz spoke warmly of Schurman, left, and Innes, right. 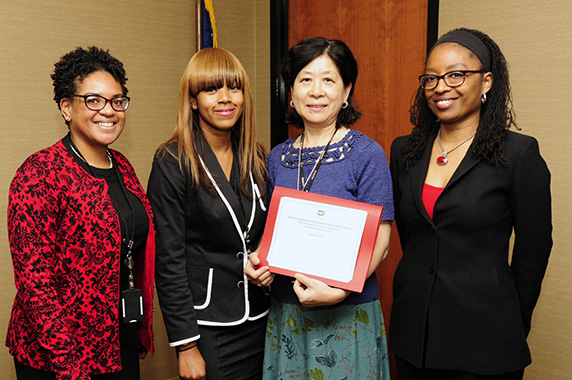 'I’ve learned so much in my time being here as a student,” said Burwell, as she presented Yu with a certificate of appreciation.