Valantine, who also leads the Laboratory of Transplantation Genomics at the National Heart, Lung, and Blood Institute, said she started thinking about the problem a decade ago when she was at Stanford University Medical Center. One of her patients was a young mother who had a heart transplant as a child, but suffered congestive heart failure 17 years later, a few months after giving birth to her own child.

'It turned out that the baby was carrying antigens, or molecules, that were similar to molecules in the heart the mother received,' Valantine said. 'Since the mother generated antibodies to the baby’s antigens, the immunological response narrowed arteries in the mother’s donor heart, prompting rejection of that heart.'

The medical team performed a second successful transplant on the woman, and today she is healthy and active. Valantine said her prognosis is good, but monitoring for rejection means transplant patients must undergo painful and expensive procedures every year. So finding alternatives that are cheaper, less invasive, and, most importantly, accurate, is Valantine’s mission.

One promising technology being developed is based on measuring levels of cell-free DNA. Valantine and others theorize that cell-free DNA, found in body fluids, comes from cell death. It was already used as a tool to detect cancer, viral infections, and the severity of some autoimmune diseases, so she wanted to find out if it could determine the level of cell death in a donated organ.

After scanning medical literature and consulting with Stanford colleague Stephen Quake, D.Phil., Valantine discovered that the concept had been proposed in 1999. She and her collaborators conducted several experiments and found that an average of 100 million fragments of cell-free DNA circulate in the human body. Using a system that discriminates between donor and recipient DNA sequences, they found that a transplant patient undergoing organ rejection will have higher amounts of donor DNA, increasing in proportion to the level of rejection. 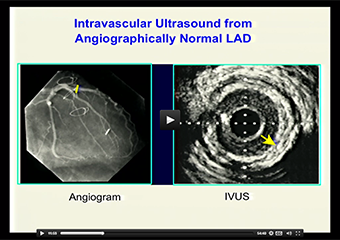 Watch as Valantine explains how genomic tools could help monitor transplant patients as part of her Anita B. Roberts Distinguished Women Scientists lecture at the National Institutes of Health. (54:40)

'It allows physicians to measure the percentage of donor-derived DNA circulating in the body as a marker of injury,' Valantine said. 'And, since this rise occurs up to three months before doctors tend to see tissue damage with a biopsy, we believe it will be able to predict who will reject the transplant.'

Stavros Garantziotis, M.D., medical director of the NIEHS Clinical Research Unit, asked Valantine whether the technology could discern if injury to an organ was the result of organ rejection or infection. She explained that it can, as the approach permits scientists to scan for nonhuman DNA, including bacterial and viral. 'This is an impressive new technology that may provide a sophisticated noninvasive biomarker of tissue injury,' Garantziotis said after the talk. 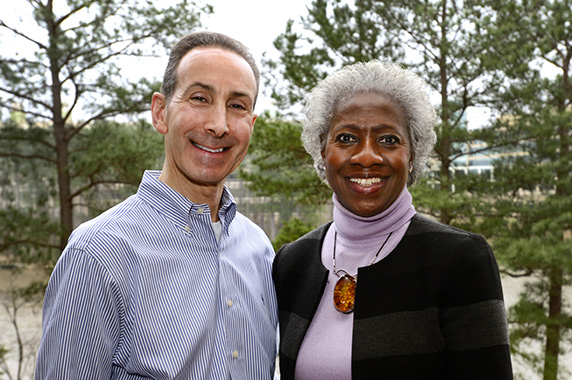 Zeldin, left, and Valantine stopped for a chat following her seminar.

Valantine admits that when she left Stanford for NIH two years ago, having to start her federal research lab and become the chief officer for scientific workforce diversity was a huge challenge. But, moving from Gambia to the U.K. as a youngster, as well as facing other changes throughout her career, prepared her to meet any task head on.

Fellow physician-scientist Zeldin lauds her research and her commitment to diversity. He especially wanted to thank Valantine for her efforts to diversify the NIH intramural, or in-house research, program.