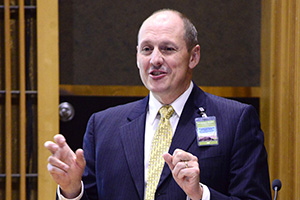 “When we start talking about the ways mixtures may have synergistic effects, take a lesson from cancer therapy — clinicians don’t expect to be able to act on the same mechanism with one chemical,” said Lowe. “From an environmental health standpoint, we should be thinking about how we can enable these different hallmarks with different chemicals.” (Photo courtesy of Steve McCaw) 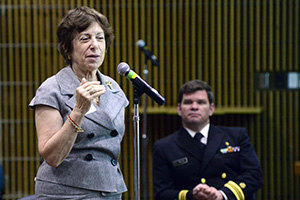 During a question and answer period, Birnbaum, left, suggested that toxicologists, epidemiologists, and other scientists collaborate on the study of epigenetic factors contributing to cancer. Mark Miller, Ph.D., right, is Birnbaum’s chief of staff and was the lead organizer of the event. (Photo courtesy of Steve McCaw)

The Halifax Project was organized around the hallmarks of cancer. Cells that acquire these hallmarks, especially combinations of them, are more likely to be able to form malignant tumors. 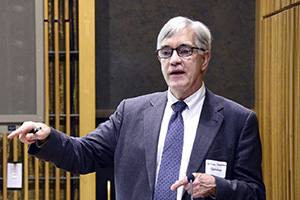 According to Goodson, researchers face several challenges, including the need for more relevant epidemiology studies, improved understanding of biology and physiology, focusing on chemicals beyond those that imitate estrogen, finding reliable cell models, understanding exposure mixtures, and mapping the epigenome. (Photo courtesy of Steve McCaw)

Scientists gathered at NIEHS Aug. 25 to consider how exposures to low doses of chemical mixtures may contribute to the development of cancer. The Halifax Project: Low Dose Theory Symposium was organized to discuss next steps, following publication of a special issue of the journal Carcinogenesis, which was written by a group of scientists known as the Halifax Project Task Force.

The name Halifax Project refers to a 2013 meeting in Halifax, Nova Scotia, that was supported by the NIEHS Superfund Research Program. At the meeting, 170 researchers from a variety of scientific disciplines discussed the potential of low doses of chemical mixtures to cause changes that lead to cancer.

“We are happy to have NIEHS eyes on the project,” said Leroy Lowe, co-founder and president of Getting to Know Cancer, the organization that coordinated the Halifax Project , “because we are quite interested to hear from so many cancer biologists about how they think biology might inform risk assessment and toxicology.”

“There are several questions about how to define low dose, determine the most relevant windows of susceptibility, and investigate exposures to mixtures,” said Linda Birnbaum, Ph.D., director of NIEHS and the National Toxicology Program (NTP). “One thing we know is that the toxicology of the 21st century should not be that of the 20 th century.”

As Lowe and other speakers emphasized, much of the research on the contribution of environmental exposures to cancer has emphasized carcinogens, which are single chemicals that are shown to lead to cancer. However, because cancer development is often a long, involved process, there may be opportunities for multiple chemicals to play independent roles, each contributing to the final disease state. Chemicals may either promote cancer or interfere with mechanisms in the body that correct abnormalities in cells (see sidebar).

For the Halifax Project, scientists reviewed literature for evidence that chemicals might be able to act together to promote cancer, even though the chemicals may be considered noncancer-causing and the public may be exposed at low levels.

In the papers they wrote for the Carcinogenesis issue, the researchers presented 85 environmental chemicals that may act on key pathways, to result in one of 11 hallmarks, or phenotypes, of cancer. Over half of those chemicals exerted effects at levels similar to levels the general population is commonly exposed to. The scientists proposed that by acting on different pathways, these chemicals may produce a cumulative effect that leads to cancer.

Next steps for testing the hypothesis

The NIEHS symposium served as the next step toward developing a hypothesis. Researchers from government, academia, industry, and nongovernmental organizations, as well as the Halifax Project attended the meeting. Lowe and William Goodson III, M.D., who served as first author of the lead paper in Carcinogenesis, provided background on the Halifax Project and the implications of the findings. Attendees then broke into three roundtable discussions on emerging research needs.

“The next stages of this project concern whether we can translate what we see as a problem into science that demonstrates that it is an issue,” said Lowe.

Participants agreed that an important next step is to generate data to test the low-dose mixtures theory. “You’ve got a theory saying that low doses to environmental chemicals somehow are working together to increase cancer,” said Richard Peffer, Ph.D., senior toxicologist at Syngenta. “If that was the case, there should be some experimental data pointing to that.”

Participants emphasized that transdisciplinary conversations are essential to future research. “The epidemiologists, toxicologists, biologists, and oncologists all need to be talking to industry, and there needs to be a back and forth,” said Goodson. “The stakeholders here are not the doctors and industry. The stakeholders are our children, our grandchildren, and our great-grandchildren, and whatever we do now is going to change their lives. It behooves us to try to do it right.”