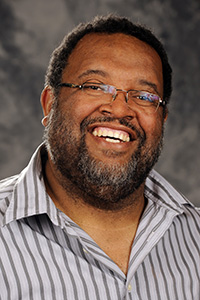 Archer also serves as head of the NIEHS Epigenetics and Stem Cell Biology Laboratory. He said that while the signaling pathways or environmental cues that normally regulate LIN28A are not known, it will be interesting to search for compounds, such as endocrine disruptors, that may affect LIN28 expression in breast cancer cells. (Photo courtesy of Steve McCaw) 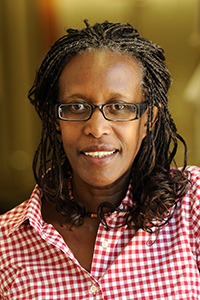 Kinyamu led the project in the Archer lab. (Photo courtesy of Steve McCaw)

The RNA-binding protein LIN28A is an important regulator of processes that play a role in many types of breast cancer, including alternative splicing, a process in which a single gene may code for multiple proteins, and other gene expression programs. These are the key findings of a study published by NIEHS researchers in the September issue of the journal Molecular and Cellular Biology.

LIN28 has been previously known to have critical functions in the timing of events during embryonic development and in cancer. Scientists in the NIEHS Chromatin and Gene Expression Group discovered that LIN28 contributes to tumor progression through multiple mechanisms, including inhibition of tumor suppressors. They studied breast cancer cells using analytical methods called RNA-Seq and RIP-Seq, or RNA immunoprecipitation sequencing, to learn more about the function of LIN28 in breast cancer.

The LIN28 protein occurs in two forms in mammals. LIN28A, through its regulation of splicing and gene expression, appears to produce a diverse family of proteins. The type of protein produced can lead to different types of breast cancer. “For example, alternative splicing of the ENAH gene yields distinct transcripts that encode different proteins,” explained Trevor Archer, Ph.D., the group’s lead scientist.

“These proteins are expressed differently in the various subtypes of breast cancer,” added staff scientist and co-author Harriet Kinyamu, Ph.D., who made the initial discovery of LIN28 expression in the lab.

The findings represent an important advance in basic science, by adding to the understanding of the mechanisms that lead to breast cancer, which is now recognized to be a disease composed of several different subtypes with varying causes.

LIN28 may be a factor in many of the subtypes. As the authors noted, “The suite of mRNAs whose expression is affected [by LIN28A] includes genes that function in cell metabolism, the immune response, cell proliferation, and cell-to-cell communication, processes that are classic hallmarks of breast cancer biology.”

With LIN28A now identified as a master regulator, Kinyamu said that it is a potential therapeutic target. “Because it is a protein, drugs or small molecules that either alter LIN28 expression or inhibit its activity are the most likely possibilities,” she said, noting that although LIN28A therapy might be most effective in HER2-positive breast cancers, it could also affect other types of the disease.

The paper was singled out for recognition by the journal’s editors for a Spotlight feature, for articles of significant interest.

“We were excited they recognized our groundbreaking work on LIN28 gene regulatory mechanisms in breast cancer cells,” said Archer. “We hope the spotlight encourages more research toward understanding LIN28 function in breast cancer.” 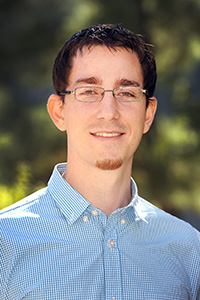 Brian Bennett, Ph.D., a contractor with the NIEHS Biostatistics and Computational Biology Branch, provided bioinformatics support and served as co-lead author of the paper. (Photo courtesy of Steve McCaw) 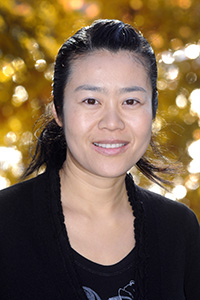 Jun Yang, a biologist in Archer’s group, served as co-lead author of the paper (Photo courtesy of Steve McCaw)