A scientist gives back — Rahman on women’s environmental health 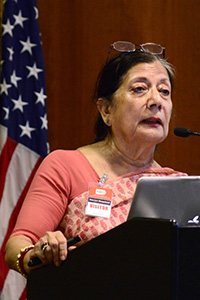 NIEHS welcomed Qamar Rahman, Ph.D., for a July 8 talk on the challenges faced by Indian women in the workplace, titled “Women! A Vulnerable Population in Occupational Settings.” Rahman highlighted her motivation to give back to her community by working to improve the occupational and environmental health of Indian women.

Dean of research science and technology at Amity University in Lucknow, India, Rahman is also the former deputy director of the Indian Institute of Toxicology Research in Lucknow. She is an expert in inhalation toxicology, especially of  nanoparticles and asbestos.

“Dr. Rahman is tremendously accomplished as a scientist and a dedicated champion for women,” said Linda Birnbaum, Ph.D., director of NIEHS and the National Toxicology Program. “Her outstanding work earned her an honorary degree from Rostock University in Germany. In 600 years of the university’s history, she is the only Indian to receive such a degree. That’s quite an achievement.”

Rahman’s talk focused on occupational threats to the lung health of women, addressing three broad areas. The first was the lack of ventilation for indoor cooking. She explained that Indian women rely on the smoke to drive off mosquitos and heat the room, but breathing that smoke, from fuels such as kerosene, wood, and cow dung cakes, often leads to respiratory disease.

Next, Rahman turned to women employed in the manufacture of asbestos, a process recently banned in certain business sectors, but still occurring illegally. She said that many women develop asbestosis within 5 to 7 years of beginning such work.

Finally, Rahman discussed silicosis, a disease caused by the inhalation of silica from sand, rock, and mineral ores. She told of asking one worker, “Don’t you know this dust is toxic?” Rahman said the worker replied, “Yes, I know it well. But I do not want to die of hunger.”

Working to make a difference

Rahman’s empathy for these women made her determined to help. “I thought, I’ve done so much in my life, now I can give it back,” she said. Rahman serves as chair of the Foundation for Education and Economic Development. The foundation works to address issues that prevent social equality and development, through education and empowerment.

Active in the World Health Organization and the Indian government, Rahman forged a path for other women to follow, then turned back to help bring progress to the lives of local disadvantaged women.

During a previous visit to NIEHS, Rahman spoke on the health effects of nanoparticles.

(Simone Otto, Ph.D., is an Intramural Research and Training Award fellow in the Ion Channel Physiology Group at NIEHS.) 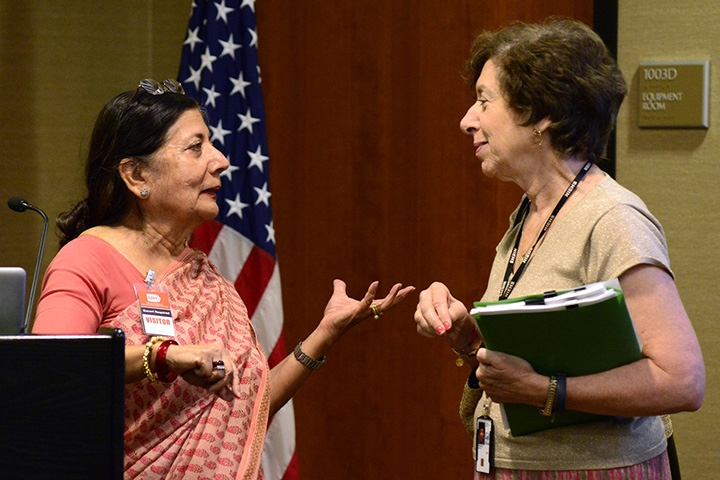 Birnbaum, right, the first woman director of NIEHS, and Rahman share both a history as trailblazers for women and life-long passions for toxicology. (Photo courtesy of Steve McCaw)