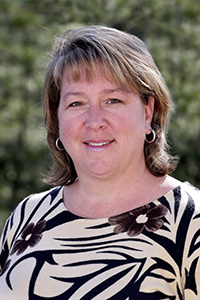 Fenton addressed the elusive link between breast cancer and chemical exposure. “We may never have enough evidence to prove that something caused a disease, because we’re exposed to so many things in mixtures,” she said. “We need to move from the idea of strict causation to one of increasing or decreasing risk.” (Photo courtesy of Steve McCaw) 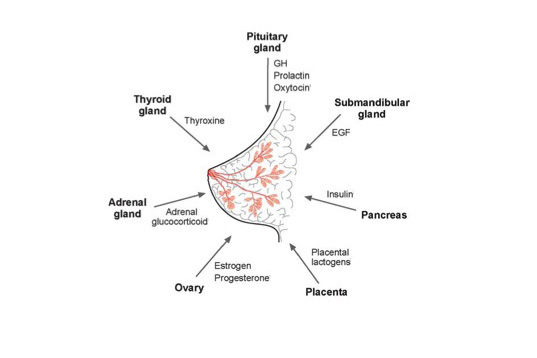 The mammary gland is unusual in the number of organs it receives signals from and the number of hormones the tissue responds to. (Photo courtesy of Sue Fenton)

As a kid growing up on a farm in Wisconsin, Sue Fenton was fascinated by dairy cows. “I always wondered how they could produce milk nearly year-round, for year after year,” she said.

Now a Ph.D. and a reproductive endocrinologist with the National Toxicology Program (NTP) at NIEHS, Fenton highlighted the cutting edge of mammary gland research, guest editing “Environmental Impact on Breast Development and Disease,” a July 2015 special issue of the journal Reproductive Toxicology.

The extent of the problem was spelled out in a summary article co-authored by Linda Birnbaum, Ph.D., director of NIEHS and NTP, and Gwen Collman, Ph.D., NIEHS Director of Division of Extramural Research and Training.

According to Fenton, the breast’s susceptibility to cancer is exceptional among the reproductive organs. “Other tissues such as the ovary, testis, and uterus are also critical for reproduction; yet, they do not display the high degree of carcinogenicity in humans as seen in the breast,” she wrote in her editorial.

The reason, she explained, is the complexity of the tissue, which makes it difficult to get a handle on the reasons for its carcinogenicity.

“There are many cell types in the mammary gland, plus its own fat, which means it has its own hormones from fat. And the breast actually receives signals from about ten different organs,” she said. “This is one of the reasons why more people don’t do this kind of work. You can’t just take the epithelial cells out of their tissue, use them in culture, and expect them to behave as they would in the body, as you can do with many other tissues.”

To better understand how endocrine disrupting chemicals (EDCs) cause cancer, the scientists in the special issue relied on animal studies and on associations found in cohorts of children.

“We looked at early exposure to a chemical, as opposed to at the time of diagnosis, and we’re finding some strong risk factors associated with that,” Fenton said. “Fetal exposure, or in utero exposure, or prenatal — one of those words is used in almost every one of these studies. I didn’t ask for such papers. It’s just that people are recognizing the importance of it, and they are setting their experiments up that way.”

Birnbaum and her co-authors reinforced the importance of timing in their summary. “There are windows of susceptibility during the life course,” they wrote. “To understand the role of the environment in the etiology of breast cancer, we must understand life stages when the breast is most susceptible to environmental insults.”

A sense of urgency

The evidence for the role of chemical exposure shows up in outcomes such as early puberty and accelerated breast development, which Fenton said is rampant across the globe. “It’s happening much faster than gene change, it’s not genetic,” she said. “It’s definitely the environment playing a role.”

Over the years, with growing evidence for the environmental contributions to cancer, Fenton has acquired a sense of urgency. “It’s one of the most often diagnosed cancers in women, and we know so much less than we know about other cancers.”

A wealth of strong research

The issue includes a wealth of studies among its 18 papers. “I knew most of these researchers professionally, so thought they would send high quality manuscripts,” Fenton said. “I was right.” She was happy to note that the scientific community seemed to concur. After only two weeks, one of the papers had already been downloaded 263 times. The following papers are among those in the special issue.


"Researchers rise to the ..." - previous story