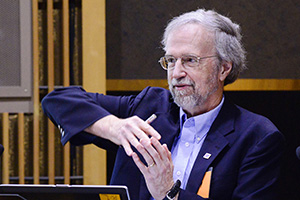 Walker discussed a crystal structure of Rev complexes, obtained in collaboration with Pei Zhou, Ph.D., of Duke Medical School (see Wojtaszek J et al., 2012). He described the interaction between Rev7 and the Rev3 peptide as a seat belt, demonstrating for the audience. (Photo courtesy of Steve McCaw)

A passion for teaching

In 2002, Walker was named one of 20 original participants in the society of HHMI Professors .

Since his appointment, the society has supported the Education Group in the MIT Department of Biology, which provides innovative tools for the interactive teaching of biological concepts.

The Education Group has made several software packages freely available, including StarGenetics , a genetic cross simulator, and StarBiochem , a molecular graphics viewer. 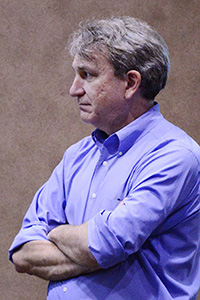 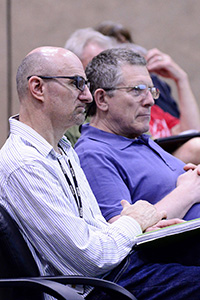 Bill Copeland, Ph.D., left, who leads the Genome Integrity and Structural Biology Laboratory, and Dmitri Gordenin, Ph.D., chief of the Mechanism of Genome Dynamics Group, were among the audience that came from all divisions of the institute. (Photo courtesy of Steve McCaw)

When DNA becomes damaged, cells use specialized machinery, known as translesion synthesis (TLS) polymerases, in the DNA replication process. Graham Walker, Ph.D., presented a historical perspective on these specialized molecules at the May 28 Keystone Science Lecture Seminar Series. Walker , a professor at Massachusetts Institute of Technology (MIT) and a Howard Hughes Medical Institute (HHMI) Professor, also discussed his group’s recent advances, which have implications for both human cancer treatment and bacterial antibiotics.

Walker credited geneticist Evelyn Witkin, Ph.D., for laying the foundation for his research. Her work on radiation-resistant bacteria in the 1960s and 1970s led to the discovery of a response to DNA damage known as the SOS response, which includes an error-prone DNA repair pathway.

As a postdoctoral fellow, and later in his own lab, Walker extended these discoveries to bacteria and to higher life forms, including humans. His work contributed to the characterization of the error-prone TLS polymerases known as Rev1 and DNA pol zeta (Rev3-Rev7). Walker dedicated his talk to the 94-year-old Witkin, with whom he had dinner just last year.

Walker said that all too often, animal models and clinical trials of cancer therapeutics follow an unfortunate sequence, with an early apparent success followed by reappearance of the tumor. These long-term failures intrigued Walker, and he hypothesized that the problem lay in TLS polymerases, whose errors may induce mutations.

“Cancer is a disease of mutations,” he explained. “If you look at the genomes of tumors from lung cancers or melanomas, they’re just loaded with mutations whose signatures look like they come from the action of these DNA polymerases.” The polymerases, which are enzymes, introduce errors at chemotherapy-derived DNA damage sites, he said, providing tumors with the mutational means to develop resistance.

In the last five years, Walker’s lab has published a number of findings that support this hypothesis. In mice models, they found that decreasing the level of expression of Rev1 (Xie K, et al., 2010) or Rev3 (Doles J, et al., 2010) in the tumors improved the outcomes of two DNA-damaging chemotherapeutic drugs, cyclophosphamide and cisplatin.

Walker, an avid collaborator, has reached out to numerous labs to further develop chemotherapeutic approaches. For example, he worked with Omid Farokhzad, M.D. , of Harvard Medical School, and his nanoparticle platform, to co-deliver small interfering RNA (siRNA) molecules together with a cisplatin prodrug, which significantly enhanced the results (Xu X, et al., 2013).

Walker alluded to the “big crisis coming up” for antibiotics, because resistance is increasing while approvals of new antibacterial drug applications have sharply declined. According to Walker, his research on bacterial TLS enzymes has led to new insights into how antibiotics kill cells.

In addition to acting on specific molecular targets, antibiotics may lead to metabolic stress and oxidation of important molecules in bacteria. Sam Wilson, Ph.D., chief of the NIEHS DNA Repair and Nucleic Acid Enzymology Group, pioneered the study of  8-oxo-dGTP, which is the oxidized product of the deoxynucleotide guanosine triphosphate, which is incorporated into DNA.

Building upon Wilson’s work and working with NIEHS funding, Walker’s laboratory has extensively studied a bacterial TLS polymerase known as DinB, which preferentially incorporates 8-oxo-GTP into the genome, resulting in DNA damage.

“We then fiddled with the DNA polymerase composition to make the cells less able to put in 8-oxo-dG and we saw protective effect against bactericidal antibiotics,” explained Walker (Foti JJ, et al., 2012). 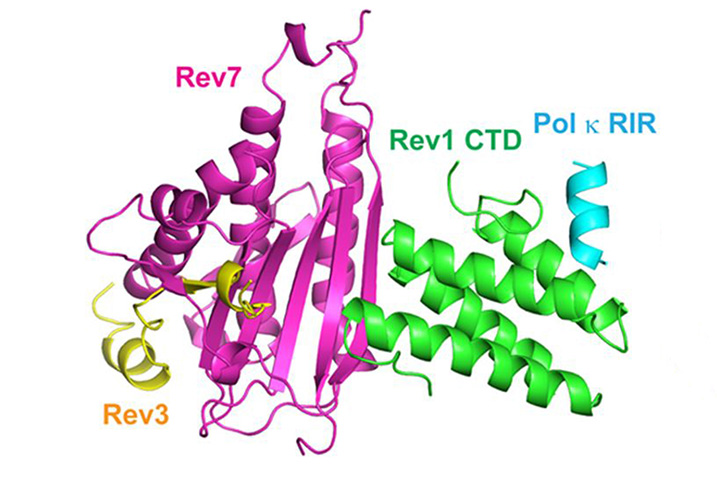