New data tools top the agenda at NTP board meeting 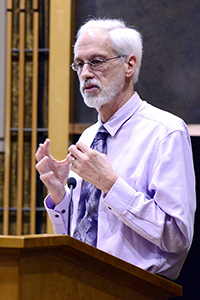 Bucher announced that DNTP was awarded some of the funds redirected after cancellation of the National Children’s Study (NCS) by NIH in December. Remaining true to the original intent of the study, DNTP will use the funds to expand the Tox21 program to encompass a Developmental Toxicity Program. (Photo courtesy of Steve McCaw) 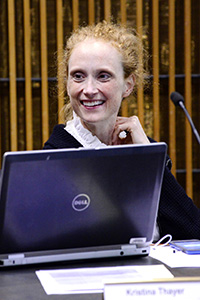 Thayer enjoyed one of the lighter moments in a detailed discussion of new data analysis tools that promise to advance systematic review. (Photo courtesy of Steve McCaw) 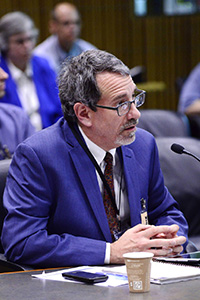 New and maturing tools to aid the process of systematic review and overall NTP research efforts took center stage at the June 16 meeting of the National Toxicology Program (NTP) Board of Scientific Counselors (BSC).

Representatives of the NTP Office of Health Assessment and Translation (OHAT) briefed the board on several quickly developing innovations. The board also approved two contract concepts and heard updates on topics, such as NTP’s analysis of the chemicals in the 2014 Elk River chemical spill (see story) and an NTP research project to update the levels of concern categories used in NTP conclusions about the hazard identification of environmental exposures.

Hopeful signs on the budget

Later in the morning, after NIEHS and NTP Director Linda Birnbaum, Ph.D., reported on recent and upcoming developments at NTP, she shared an up-to-the-minute news flash from Capitol Hill. The full House Appropriations Committee had just released its fiscal year 2016 Labor, Health, and Human Services funding bill , which includes funding recommendations for the National Institutes of Health (NIH), the parent agency of NIEHS.

In his report, NTP Associate Director John Bucher, Ph.D., announced that Kristina Thayer, Ph.D., was named Deputy Director for Analysis in the Division of the NTP (DNTP). In her new position, Thayer will oversee both OHAT and the Office of the Report on Carcinogens, and she will be responsible for continuing to advance the use of systematic review in environmental health sciences.

Thayer kicked off a session devoted to briefing the board on new software advances to make the process of conducting a systematic review more efficient, focusing on tools for text mining and machine learning, structured data extraction, and data display.

OHAT has been working extensively to implement systematic review methods, including release of a handbook on conducting systematic reviews in January 2015. “Parallel to adopting principles of systematic review, we’ve made a pretty large investment in tool development,” said Thayer. “These tools have really matured in the past year, to the point now that they can regularly be seen as part of OHAT projects.”

One of the new tools, called SWIFT (Sciome Workbench for Interactive Computer-Facilitated Text Mining), will be released for use later this year and will be freely available. Contractor Ruchir Shah, Ph.D., from Sciome LLC, described the tool as a user-friendly workbench to explore, categorize, search, and perform topic discovery. SWIFT also provides methods to prioritize documents to facilitate screening, with the goal of making the screening process more efficient.

“We started taking concepts from the fields of text mining, information retrieval, and machine learning to statistically analyze large collections of documents,” Shah explained. Among other applications, SWIFT will be used to help generate a new form of OHAT document called a scoping report, which provides an overall sense of the literature on a specific topic.

OHAT researcher Katherine Pelch, Ph.D., told the board about the first scoping report using the SWIFT text-mining tool to effectively winnow down an enormous number of potential references for a systematic review, in this case, on environmental influences on the epigenome.