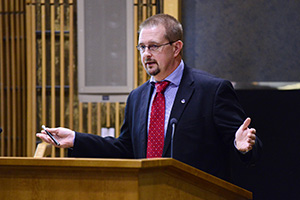 Auerbach oversaw the work of a team of scientists and administrators from across the institute to tackle the difficult project of conducting the broad battery of tests. (Photo courtesy of Steve McCaw)

In less than a year, the National Toxicology Program (NTP) completed studies that may reassure West Virginia residents impacted by a chemical spill that there is very little reason for concern about long-term health effects.

Scott Auerbach, Ph.D., one of the lead NTP scientists working on this effort, presented the study findings at the June 16 NTP Board of Scientific Counselors meeting.

“All together, the NTP findings support the adequacy of the drinking water advisory levels established at the time of the spill,” Auerbach said at the meeting. A 1 part per million (ppm) drinking water advisory for 4-methylcyclohexanemethanol (MCHM), the main chemical spilled, was established by the Centers for Disease Control and Prevention (CDC) and West Virginia health officials in early 2014.

Because there were few toxicology studies available at the time of the spill, the NTP received a nomination from CDC to develop a research plan that would provide meaningful information to public health decision-makers within a year.

The NTP designed and implemented short-term toxicity studies using a variety of toxicology models in assays that represented a wide spectrum of biology.

The studies included predictions of health effects based on computer models of chemical structure and toxicity; studies of gene mutations in bacteria; growth, development, and behavior in roundworms; developmental studies in zebrafish embryos; toxicity to human cells in culture; and toxicogenomic and prenatal toxicity studies in rodents.

The NTP concluded that the combined study findings support the adequacy of the drinking water advisory levels established at the time of the spill. Studies, in which pregnant rats were given MCHM, found that pups had lower fetal weights, but only at high doses of MCHM. The prenatal developmental toxicity study followed a standard protocol designed to test whether chemicals have the ability to affect normal fetal development in a pregnant rat.

Although of little concern, this result identified a vulnerable life stage in rodents, and suggested an opportunity to evaluate a potential health effect in the affected communities. No significant health effects were found for the other spilled chemicals. The NTP also did not find genotoxicity in any of its studies, reducing the concerns related to long-term effects such as cancer.

The NTP has been working closely since the spill with the West Virginia Department of Health and Human Resources and other state, local, and federal entities to share the study results and communicate these findings to local residents. The NTP also has been continually updating the study results on dedicated web pages since the studies began.

“We hope these studies bring some reassurance to the people of West Virginia,” said John Bucher, Ph.D., associate director of NTP. “We used the best tools that toxicology has to offer to look at these spilled chemicals, and we found very little reason for concern.”