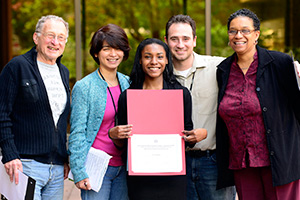 “I’ve learned this is what I want to do, and I learned a lot about myself,” said Outstanding Scholar Carri Murphy, center, with her mentors from left, Resnick, Thuy-Ai Nguyen, Ph.D., Menendez Rendon, and Snipes. (Photo courtesy of Steve McCaw) 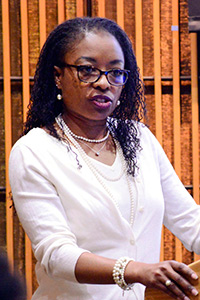 "Today is an opportunity for you to hear more about the research these scholars have been involved with since joining us last June,” Reid said. (Photo courtesy of Steve McCaw)

Scholars, mentors, family, and friends celebrated the third year of the NIEHS Scholars Connect Program (NSCP) April 17 with a symposium featuring research presentations by each scholar. For the first time, one student was named the program’s Outstanding Scholar.

“NSCP is a concerted effort to connect with surrounding colleges and universities and take further steps toward increasing the number of students from underrepresented groups in the sciences,” said Ericka Reid, Ph.D., director of the NIEHS Office of Scientific Education and Diversity (OSED).

Watch NCSP students at work and hear what the program offers. (3:23)

From classroom to laboratory and back

The six students in this year’s cohort hail from St. Augustine’s University (SAU), North Carolina Central University (NCCU), and North Carolina State University (NCSU). Organizers began the program with a boot camp in laboratory techniques, so that the students, who have a range of laboratory and academic experience, would start with the necessary skills (see story).

The scholars worked full time in their laboratories through the summer, continuing part time when classes resumed in the fall. Their training was enhanced with opportunities to attend scientific seminars, give informal presentations of their projects, and attend information sessions on topics such as ethics and resume writing.

The program is proving its reach beyond the students directly involved. “[My experience] has carried over to my lab at school, and it helped me learn how to mentor others,” said Carri Murphy, a senior at NCCU.

Organizers added an award to this year’s program, recognizing one scholar for outstanding work, based on performance evaluations by mentors and the scholars themselves, as well as ratings of professional demeanor, communication skills, and enthusiasm.

Murphy was chosen as Outstanding Scholar. “Thank you very much for being part of this program and for doing your absolute best at all times,” Reid said, presenting the award.

The students showed poise and expertise in their presentations. The diversity of research topics reflected their interests and backgrounds, as well as the range of scientific endeavors within NIEHS and the National Toxicology Program (NTP) (see text box).

The strengths of the NIEHS scientific community were also celebrated. Several scholars spoke of the high standards set by their mentors. “[My mentor] did not settle for anything less than excellence. If it was good, she would say it was good, but not good enough,” said DeAsia Lewis of her mentor, Natalie Ren, Ph.D. “I’ve been able to carry that to school with me — in writing assignments, I can always hear her in the background saying it can be better.”

Several students underscored the value of the extended practical experience. “I discovered that I am still not a scientist in spite of being in a bachelor’s of science program for three and a half years,” laughed Aaron Manning. Besides scientific insights and shared humor, a few tears also marked the afternoon, reflecting the collegiality and connections formed among the students, and between students and the scientists they worked with so closely.

• DeAsia Lewis (SAU) — “The Role of SIRT 1 in Tumorigenesis.” Xiaoling Li, Ph.D., head of the Metabolism, Genes, and Environment Group, and postdoctoral fellow Shunxiang (Natalie) Ren, Ph.D., mentored Lewis in her analysis of the role of the SIRT1 protein in cancer, where it can act to both suppress and promote tumors.