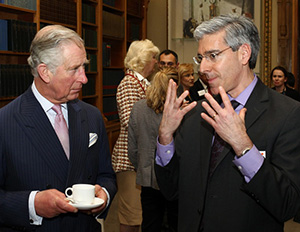 His Royal Highness Prince Charles, left, and Balbus conferred after the meeting, which included about 40 participants from the U.K., France, China, Barbados, and the U.S. (Photo courtesy of Paul Burns Photography)

NIEHS Senior Advisor for Public Health John Balbus, M.D., represented the U.S. government and the Department of Health and Human Services at a Feb. 25 meeting convened by the International Sustainability Unit (ISU), which is part of the Prince of Wales’s Charitable Foundation. The event brought international leaders, including Prince Charles, together with experts to discuss the serious health impacts of climate change and the importance of mitigation and adaptation to reduce adverse effects.

The meeting was held in advance of the United Nations Framework Convention on Climate Change, planned for December 2015 in Paris. Ministers of Health from Barbados and the United Kingdom, as well as international health experts from private, government, and nongovernmental organizations discussed the role of the health community in the dialogue on greenhouse gas reductions.

Recognizing the importance of placing health at the center of the climate change debate, ISU framed the meeting around the messages that climate change poses significant risks to public health and well being, and that mitigation provides a significant opportunity to reduce these risks.

“Over the past few years, the World Health Organization and public health scientists around the world have identified and described the deleterious health effects of climate change,” said Balbus. “Health professionals are increasingly recognizing that substantial benefits for public health can result from actions to mitigate climate change, even as they articulate the need to strengthen the resilience of the health care sector to reduce risk.”

According to Balbus, attendees highlighted the importance of developing key messages and communication strategies to deliver credible scientific information on climate change and health to different audiences, from policymakers to the general public.

Noting the close connections between urban community resilience and public health, the participants recommended outreach to existing programs on urban resilience. The climate change adaptation and mitigation activities of these programs could help reduce environmental contributions to noncommunicable diseases, in addition to other health impacts. Participants also highlighted the need for the health sector to address its own greenhouse gas emissions through a suite of sustainability measures.

“The U.K. is providing inspiration with their many examples of integrating climate change considerations into the mainstream of public health and medical practice,” Balbus said. “This meeting helped identify a set of positive actions that the health community can take to make the difference that the world so needs, as the Prince of Wales called on us to do.”

The Prince of Wales established ISU in 2010 to build a consensus on how to resolve key environmental challenges facing the global community. The event was co-hosted by the World Health Organization.

(Audrey Pinto, Ph.D., is a technical editor for the journal Environmental Health Perspectives.)