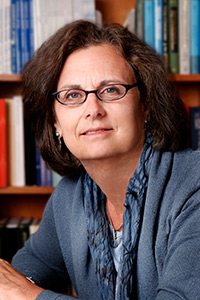 In addition to the studies singled out by the AMA, Sandler is a lead researcher for the large-scale Agricultural Health Study . She and members of her Chronic Disease Epidemiology Group lead several additional stand-alone, add-on, and nested studies. (Photo courtesy of Steve McCaw)

Dale Sandler, Ph.D., head of the NIEHS Epidemiology Branch, is the recipient of a Dr. Nathan Davis Award for Outstanding Government Service, a top honor named for the founding father of the American Medical Association (AMA).

Sandler and six other winners received their awards at the reception and dinner that concluded the AMA National Advocacy Conference Feb. 23-25 at the Grand Hyatt in Washington, D.C.

The award specifically recognizes Sandler for her pioneering contributions to the study of chronic disease.

“With this award, Dale joins an elite group of past winners, who have included senators, representatives, surgeons general, and federal executives recognized for their public service above and beyond the call of duty,” said Linda Birnbaum, Ph.D, NIEHS and National Toxicology Program director. “It is a great honor and one which Dale richly deserves for her selfless efforts to improve public health.”

Highlighting Sandler’s leadership of the Sister Study and GuLF STUDY

“Dr. Sandler’s trailblazing work in the field of research, through projects like the Sister Study and GuLF STUDY , have shed light on the role that environmental and lifestyle factors play in disease,” said Barbara McAneny, M.D., AMA chair.

“Her innovative vision has led to a greater understanding of risk factors for disease and the improvement of public health,” continued McAneny. “Her research on the health of oil spill cleanup workers through the GuLF STUDY represents a unique response to an emerging environmental and public health disaster.”

The award recognizes elected and career officials in federal, state, or municipal service whose outstanding contributions have promoted the art and science of medicine and the betterment of public health. During the past 26 years, the AMA has honored more than 200 men and women with the Dr. Nathan Davis Award.

Sandler’s award is the latest in a long list of honors Sandler has received for her work in epidemiology and public health. She was elected as a fellow of the American College of Epidemiology, a member of the American Epidemiological Society, and an alumni member of the Alpha Chapter of the Delta Omega Public Health Honor Society at the Johns Hopkins Bloomberg School of Public Health. In addition, the American College of Epidemiology presented her with its Leadership and Distinguished Service Award and its Leadership Recognition. In 2010, she received the U.S. Environmental Protection Agency Office of Research and Development Honor Award, a Bronze Medal team award.