Perera and her team recruited 720 mother-child pairs during pregnancy from northern Manhattan and the south Bronx. Study details are given below.

Most of the people in this area are low-income, African American and Dominican families. The study aims to identify the environmental risk factors associated with disease and prevent adverse health impacts. 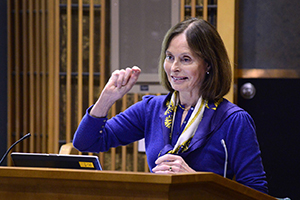 "In a recent year, more pesticides were used in New York City to deal with cockroaches and other pests, than were used in agriculture for the entire state of New York," Perera said. "If you include all the other environmental exposures, material hardship, and psychosocial stress due to poverty, as well as less access to healthy food, the result is major health disparities." (Photo courtesy of Steve McCaw) 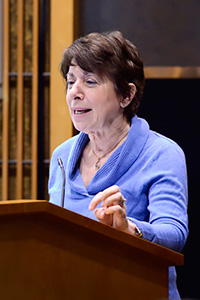 A large body of research has presented compelling evidence that the environmental exposures a pregnant woman experiences affect her unborn child. Work done by Frederica Perera, Ph.D., Dr.P.H., her colleagues at the Columbia Center for Children’s Environmental Health (CCCEH), and others suggest that those exposures may also negatively impact the child’s health into his or her adolescent years and beyond.

Perera set the stage for her lecture by asking the audience to visualize the complex processes that take place simultaneously during human fetal brain development — this highly choreographed process is at the heart of fetal susceptibility. Perera said a high rate of cell proliferation puts DNA at risk of damage from chemicals and oxygen radicals. Moreover, because the fetus has immature defense mechanisms, it is less able to clear toxicants. While these strains weigh heavily on the fetus, the mother also has to deal with environmental pressures during pregnancy.

"We have to realize there is high vulnerability of the fetus to co-exposures to environmental toxicants and psychosocial stresses experienced by the mother," Perera said. "These stressors frequently occur in underserved populations."

Several previous studies from various scientists, such as former NIEHS Director Kenneth Olden, Ph.D., found that low-income communities are disproportionally exposed to toxic air pollutants. Perera corroborated this point by citing several sources of pollutants in New York City. For example, most of the Metropolitan Transit Association diesel bus depots and sewage waste transfer stations are located in northern Manhattan, namely Harlem, and the south Bronx. According to Perera, many of the buildings in these areas are under-maintained and are heavily treated with pesticides. As a consequence, their residents experience high rates of pesticide exposure, in addition to airborne pollutants.

Perera said that since burning fossil fuel was suspected of contributing to many of the health problems the community faces, the cohort study targeted a major class of pollutants from combustion of diesel, gasoline, coal, oil, and natural gas — the polycyclic aromatic hydrocarbons (PAHs).

In addition to air pollution from combustion by-products, fossil fuel is the source of petrochemicals from which many billions of pounds of chemical products are derived. These include phthalates, pesticides, and materials treated with polybrominated diphenyl ether (PBDE) flame retardants. Petrochemicals are found in a number of consumer products, ranging from fragrances, plastics, and furniture to electronic equipment and shampoo.

Perera and her CCCEH colleagues conducted studies that focused on these toxicants. Their prenatal exposure findings suggest:

Perera concluded her talk with the reforms in New York City that resulted, in part, from the Center’s research. They include limits on idling trucks and buses, policies on traffic congestion, and legislation to restrict the use of toxic pesticides in public housing.

"These are beautiful examples of how environmental research can make the world better," Birnbaum said.