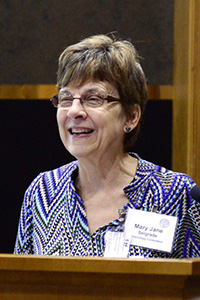 Selgrade is also the former head of the Cardiopulmonary and Immunotoxicology Branch at the U.S. Environmental Protection Agency. (Photo courtesy of Steve McCaw) 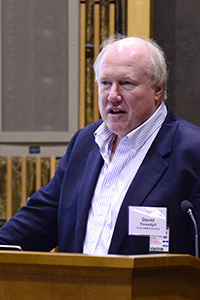 “The mouse population actually matches the variance in human populations very nicely,” said Threadgill. “There are cases where they will conform to human biology in situations where we can’t do the studies in humans." (Photo courtesy of Steve McCaw)

The North Carolina chapter of the Society of Toxicology (NCSOT) held its annual fall meeting Oct. 29 at NIEHS. This year’s theme was “Mouse vs. Man: Where the Differences and Similarities Lie in Today’s Toxicological Research.”

NCSOT President MaryJane Selgrade, Ph.D., opened the meeting with the presentation of the 2015 President’s Award for Research Competition (PARC). “We try to promote activities for students and postdocs that will benefit their careers,” said Selgrade, technical director at ICF International.

“The quality and relevance of the work done by postdoctoral fellows in the local area is evident by the three-way tie we had for third place,” said NIEHS health scientist administrator Danielle, Carlin, Ph.D., vice president of NCSOT and an organizer of the event. “It’s a great showing this year.”

First place was awarded to Ntube Olive Ngalame, Ph.D., a postdoctoral fellow in the Stem Cell Toxicology Group of the National Toxicology Program (NTP). Her work focuses on the carcinogenic effects of inorganic compounds on stem cells, and the microenvironment.

“Olive is a highly-motivated and innovative postdoc and we are very fortunate to have her in our group,” said lead researcher Erik Tokar, Ph.D. “She has a bright future ahead of her.” As part of the PARC, Ngalame received a cash award and the opportunity to present her research at the meeting.

Differences in human and mouse models of toxicity

Organizers invited three guest speakers to the event, each of whom addressed the differences between human and mouse responses in toxicological research.

“We’re on the verge of rethinking how we do a lot of experimental work,” he said. “What we can do in the lab that we can’t do in humans is actually distinguish how much of that susceptibility was the environment and how much of it was genetic.”

Beverly Koller, Ph.D., associate professor in the Department of Genetics at the University of North Carolina at Chapel Hill (UNC) School of Medicine takes a different approach to using mice to research human disease. Koller’s talk, “Humanization of Mouse Metabolic Pathways: Increasing the Translational Value of Rodent Toxicological Screens,” explored the use of human genes in mice to achieve a pattern of gene expression that more closely matches that of humans.

The third speaker was Brian Bennett, Ph.D., assistant professor in the Department of Genetics at UNC, who discussed “Differences Between the Man and Mouse Microbiomes.” Bennett’s current research focuses on the genetic components of chronic metabolic diseases. 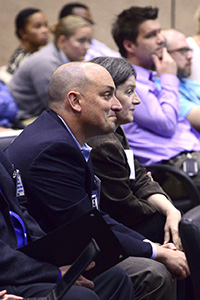 Bennett, left, is also on the faculty of the UNC Nutrition Research Institute. His work includes research on systems genetics, cardiovascular disease, and nutrigenomics. Koller, center, said that her research is yielding human gene function in the liver, kidney, and lung. (Photo courtesy of Steve McCaw) 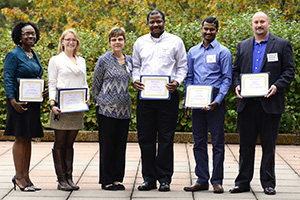 The five award winners took a break from the proceedings to pose for a photo with Selgrade. From left are Ngalame, Catlin, Selgrade, Makia, Achanta, and Sollome. (Photo courtesy of Steve McCaw)

First place — Ngalame submitted the winning abstract, “Molecular characterization of exosomes released by arsenic-malignantly transformed prostate epithelial cells and their potential role in the recruitment of nearby, but noncontiguous normal stem cells into an oncogenic phenotype.”