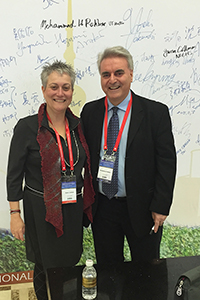 Collman and Rahbar posed after adding their signatures to those of other attendees at the International Meeting for Autism Research in Shanghai. (Photo courtesy of Gwen Collman)

Plenary talks by other researchers

Plenary talks featured researchers from across the globe.

The first regional meeting of the International Society for Autism Research was held Nov. 6-8 in Shanghai. It was organized to extend the global reach of the society, and drew more than 700 participants from 31 countries, primarily from Asia and the Pacific region. Gwen Collman, Ph.D., director of the NIEHS Division of Extramural Research and Training, was invited to give a plenary talk at the meeting. Several NIEHS-funded scientists also participated.

The meeting opened with welcomes from a number of Chinese dignitaries, followed by Geraldine Dawson, Ph.D., president of the International Society for Autism Research and a professor at Duke University, who provided opening comments. In a later plenary talk, Dawson presented her research on brain imaging in siblings of children with autism. “The hope is, that by intervening very early in life, the course of early brain and behavioral development can be modified, and the disabling symptoms of autism can be significantly reduced or even prevented,” she wrote in a summary of her talk.

NIEHS and the role of environmental exposures

Collman also discussed strategies for improving environmental exposure assessments in human studies. One such strategy is to use interdisciplinary teams that include members of autism advocacy groups. “These partnerships are important for incorporating the concerns of the affected community and translating the research results back to families of persons with ASD,” she said.

Her presentation was well-received and prompted a number of thoughtful questions from participants of the discussion session. “It was a sophisticated audience and their questions raised important points,” she said. Collman took the opportunity to meet with scientists from the region, answering their questions about how to study environmental exposures in the context of children’s health research.

A panel on the environment, biomarkers, and risk factors featured two NIEHS-supported researchers, as well as two researchers from Chinese institutions. Jim Zhang, Ph.D. , of Duke University, presented an in-depth analysis of studies linking air pollution exposure to autism risk. He discussed evidence of a causal link and its biological likelihood, and recommended that future studies examine exposure levels, biomarkers, and their relationships with ASD clinical measures.

Mohammad Rahbar, Ph.D. , from the University of Texas Health Science Center at Houston, described results of metal biomonitoring in a case control study of autism he is conducting in Jamaica. Rahbar described an interesting gene-environment interaction between genes involved in the production of glutathione-S-transferases, or GSTs, and blood levels of manganese, a heavy metal, in the children studied. GSTs are a major group of detoxification enzymes, especially involved in removal of heavy metals. 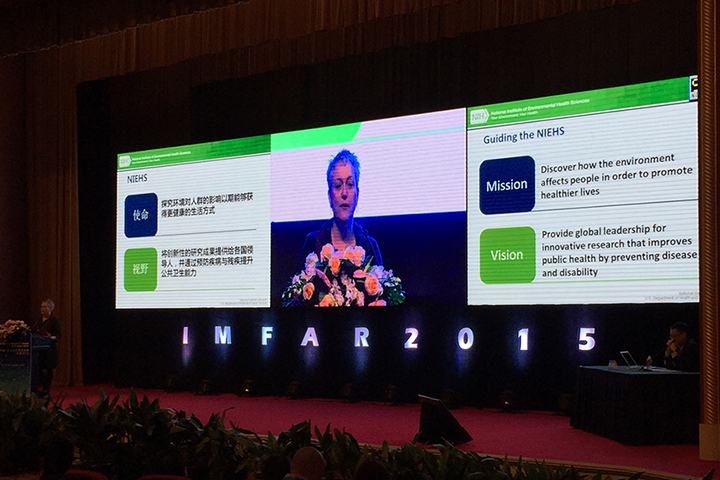 Collman’s talk on the NIEHS mission and research into environmental impacts on public health was translated into Chinese at the fully bilingual event. (Photo courtesy of Gwen Collman)