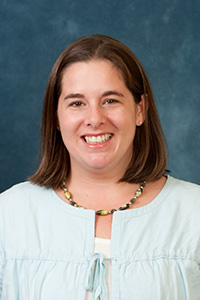 "If successfully completed, this project will greatly transform the technologies currently used in epigenomics research and their translation to clinical settings," said Dolinoy. (Photo courtesy of Dana Dolinoy)

Although most NIH grants require demonstrated feasibility to be funded, the Transformative Research program invests in bold ideas that have not been tested because it would be cost-prohibitive to do so. Without preliminary data, applicants must emphasize innovation and scientific significance to be selected. Dolinoy was one of eight researchers to receive the award this year.

“This program has consistently produced research that revolutionized scientific fields by giving investigators the freedom to take risks and explore potentially groundbreaking concepts,” said Collins. “We look forward to the remarkable advances in biomedical research the 2015 awardees will make.”

Dolinoy hopes to push the frontiers of epigenetic science with a four-year, $2.4 million project called Development of piRNAs for Target-Specific Methylation. There is growing evidence that environmental influences can affect the epigenome, or how genes are expressed, as well the genome or the genes themselves.

This method of gene silencing produces permanent changes because it acts during transcription, the first step of gene expression when DNA strands are copied into RNA, rather than during translation, which is the final step that generates proteins.

Working with mice, the researchers will use visually evident outcomes, like changes in fur color or stress behaviors, to show that the method works. If successful, this groundbreaking approach will provide a way to alter the epigenome that is directly applicable to human disease.

Current NIEHS grantees who have received High-Risk, High-Reward program funding say that it has changed the direction of their careers.

Donna Spiegelman, Sc.D., of the Harvard School of Public Health, received a 2014 Pioneer Award. She has expanded her research team to include five postdoctoral fellows who are focused on developing methods for integrating research findings into public health policy and practice, known as implementation science. Spiegelman’s team is consulting with public health leaders from around the world about urgent methodological needs, such as identification of optimal, cost-effective cancer screening and implementation of environmental-level changes in the workplace to prevent diabetes and cardiovascular disease.

“The Pioneer Award funding has completely changed the makeup of my lab in exciting and sometimes unanticipated ways,” said Oliver Rando, M.D., Ph.D., of the University of Massachusetts Medical School, who also received a 2014 Pioneer Award. “We have gone from being a yeast genomics lab to one heavily invested in mouse genetics, reproductive biology, and early development. It has been unspeakably exciting!”

Manish Arora, Ph.D., of the Icahn School of Medicine at Mount Sinai, was granted a 2014 New Innovator Award. “The support from this grant allows me to study fetal programming by environmental stressors, and how this may impact long term health outcomes,” he said. “Some of the methods I use rely on sophisticated technology not traditionally used in environmental health, and this NIEHS mechanism makes it possible for me to access resources around the globe.”