Federal agencies work to reduce the use of animals in research and testing. Methods that use fewer or no animals, or that reduce animal pain and distress, are referred to as alternative methods. NICEATM supports NTP high-throughput screening projects and conducts other projects relevant to test method development. NICEATM includes contract staff employed by ILS. 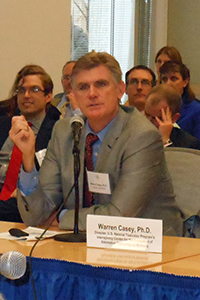 Joining colleagues from EPA, Casey made a point about advances in automated screening while introducing his presentation to the advisory panel. (Photo courtesy of Nicole Kleinstreuer)

The Federal Insecticide, Fungicide, and Rodenticide Act Scientific Advisory Panel, made up of experts from government and academia, met Dec. 2-5 to consider the proposed approach, which has the potential to be more efficient and robust than current practices.

The Endocrine Disruptor Screening Program was established to identify substances found in pesticides and other chemical products that could interfere with the normal function of hormones and potentially cause health problems in humans and wildlife.

The panel focused on an approach to identifying substances that could interfere with estrogen and androgen hormone pathways, which are mostly associated with female and male sex characteristics. Current approaches to identifying these substances use data from animal tests, but the proposed approach uses data from automated cell- and biochemical-based in vitro methods.

Warren Casey, Ph.D., director of the NTP Interagency Center for the Evaluation of Alternative Toxicological Methods (NICEATM), presented the Center’s comparison of animal test data and high-throughput screening data for substances that could mimic the action of estrogen hormones. The key question to consider, he noted, was whether animal tests used to identify potential estrogen-active substances still added value to the screening program.

“A lot has happened in recent years to make in vitro methods more useful and informative; technologies and data handling methods have improved, and a better understanding of mammalian physiology has been applied to making better assays,” Casey explained.

Nicole Kleinstreuer, Ph.D., a member of the Center’s Integrated Laboratory Systems, Inc. (ILS) contract support staff, followed with an analysis of data on substances that could mimic the action of androgen hormones. Other scientists from the EPA National Center for Computational Toxicology and the EPA Office of Science Coordination and Policy gave presentations on interpretation and application of the in vitro data, approaches to estimating exposure, and interpretation and application of the exposure data.

The panel was impressed by the work that went into the testing and analysis, and members of industry and animal welfare groups expressed their enthusiasm for the approach being proposed by the EPA.

(Catherine Sprankle is the NICEATM Communications Specialist and works for ILS, the contractor that supports NICEATM.)