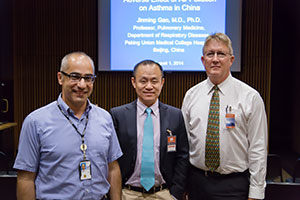 Garantziotis, left, and Pleasants, right, were eager to co-sponsor a special seminar by Gao on such a relevant topic. Air pollution is one of the major environmental causes of disease. (Photo courtesy of Steve McCaw) 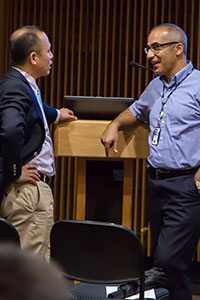 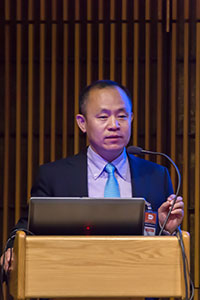 Much of Gao’s referenced work stemmed from studies in China. He indicated that the air quality in urban areas of China makes it “miserable for lung health.” (Photo courtesy of Steve McCaw)

A special seminar Aug. 1 at NIEHS featured Jinming Gao, M.D., Ph.D., professor of medicine and chief physician at Peking Union Medical College Hospital in Beijing. His talk, “Adverse Effect of Air Pollution on Asthma in China,” focused on airway health and disease, using the poor conditions in China as a model for the impact of environmental exposures on pollution-related respiratory disease.

The seminar was co-hosted by Acting Director of the NIEHS Clinical Research Program Stavros Garantziotis, M.D., and Roy Pleasants, Pharm.D., clinical pharmacist with the Pulmonary, Allergy, and Critical Care Medicine Division at Duke University. Grantziotis took advantage of Gao’s visit to North Carolina, as a featured speaker at the 2014 Carolina’s COPD (chronic obstructive pulmonary disease) Symposium, to invite him to talk at NIEHS.

In his introduction, Garantziotis emphasized the relevance of Gao’s seminar for efforts to reduce air pollution as a strategy for disease prevention. “This presentation highlights the global effects of pollution on human health,” he said.

Gao discussed a series of studies connecting air quality and pollution to lung health. He opened his seminar with several startling facts about air quality in China. According to a 2007 World Bank study, China is home to 16 of the 20 worst air-polluted cities. Also, more than 300,000 deaths due to pulmonary conditions and 20 million cases of respiratory disease are reported each year, costing more than 3 percent of China’s annual gross domestic product.

Likely contributing to the poor air quality is the nation’s reliance on coal. Coal supplies 70-75 percent of the energy needs of China, where 1.9 billion tons of coal are used each year.

Because rates of asthma are on the rise, many research groups are striving to determine the mechanisms of asthma. As Gao explained, contributing factors include oxidative stress and damage; airway remodeling; inflammatory pathways and response; and genetic and environmental interactions. Risk modifiers, such as dietary factors, obesity, and secondhand smoke exposure, complicate the understanding of asthma risk, but also point to complementary interventions.

Interestingly, the 2008 Summer Olympics in Beijing provided an opportunity to study the effects of intervention on lung health, by creating a window of improved air quality as a control. In the months leading up to and through the Olympics, the Chinese government implemented several air pollution reduction programs, including restrictions on automobile use, closing factories, and seeding clouds to induce rain fall.

These air quality improvement measures were associated with an attenuation of the systemic proinflammatory response and a reduction in the levels of circulating macroparticles. An NIEHS-funded study found that decreased air pollutant concentrations during the Olympics were associated with improved biological measurements related to inflammation and cardiovascular physiology in healthy young adults (see story).

There are now strategies being put in place in China to combat respiratory illness. In response to awareness efforts by scientists and the China Asthma Alliance, the Chinese government has spent more than $10 billion to relocate dirty factories, assist the switch from coal to gas, and work to tighten rules on emissions. Patients with asthma have been advised to live at least 300 meters away from roadways to avoid exposure. The public receives a daily air quality forecast, as part of the weather report in Beijing. Furthermore, China now prohibits smoking in public places, and is working to inform the public of the harmful effects of smoking through outreach programs.

“We can learn valuable lessons about environmental health effects from other nations’ experiences,” Garantziotis stated. Gao highlighted a number of studies that provide compelling support for reducing air pollution, as a means to help prevent the development and worsening of respiratory illness.

(Shannon Whirledge, Ph.D., is a research fellow in the NIEHS Laboratory of Signal Transduction.)