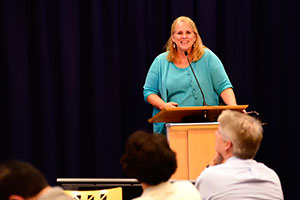 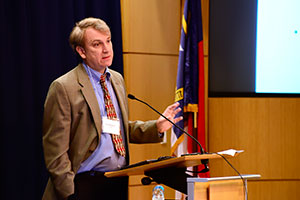 As Shaughnessy reviewed the history of the NIH Metabolomics program, he said he was impressed by how much progress has been made. “Now we’re seeing a lot more data-based research,” he said. (Photo courtesy of Steve McCaw)

The event was held at RTI International in Research Triangle Park, North Carolina. It was co-sponsored by the NIH Eastern Regional Comprehensive Metabolomics Resource Core (RCMRC) at RTI, headed by Susan Sumner, Ph.D., and the Waters Corporation, which offers analytical system solutions, software, and services for scientists.

The symposium’s afternoon session featured talks by six scientists who are collaborating with the core at RTI to conduct ongoing metabolomic profiling studies.

In her opening remarks, Sumner outlined the potential of what she described as the metabotype — the individual metabolic profile of an organism’s functional state or phenotype. Metabotype is based on the results of advanced metabolomic assays of the low molecular weight complements of cells, tissues, and biological fluids.

As Shaughnessy told the audience, next-generation metabolomics technologies, such as chromatography-mass spectrometry and nuclear magnetic resonance spectroscopy, have identified more than 20,000 known metabolites, to date. As technology advances, researchers may have the potential to double the number of unique chemical entities, including exogenous metabolites from environmental chemicals, toxins, dietary factors, and drugs.

Because of its tremendous potential across the spectrum of biomedical research, metabolomics has become a high priority for trans-NIH support. The program is dedicated to increasing national capacity for metabolomics studies nationwide with regional metabolomic core programs, training the next generation of researchers, synthesizing reference standards, promoting technology development, and enabling data sharing and international collaborations.

The program goal, Shaughnessy said, is to develop technologies to enable, better, faster, and cheaper approaches for identifying metabolites for public health research.

Applications in biomedical research and translation

Plumb, whose role in the Department of Surgery and Cancer at Imperial says much about his dedication to translational medicine, dazzled symposium attendees with his vision of the future of personalized medicine, based on metabolomic profiling and phenome analysis. He began with the 100-100 concept — the goal of achieving 100 years of longevity at 100 percent of optimal health — and offered glimpses into how it can become a reality.

Among many technical developments to come, Plumb pointed to the potential for high-throughput imaging of drug and metabolite distribution in tissues, to monitor individual patient response to treatment. He described an operating theater of the future, where surgeons can access real-time tissue profiling as they perform operations and screen the metabolomic environment for more effective diagnosis than was ever possible with needle biopsy.

The afternoon presentations demonstrated the promise of metabolomics in a number of disease and therapeutic areas, showing how support from the NIH Common Fund Metabolomics program is advancing biomedical research, with implications for prevention, early-stage interventions, and treatment of cancer and other noncommunicable diseases (see text box). 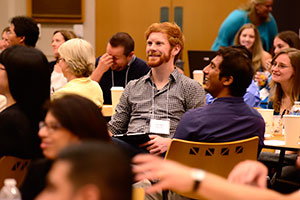 Along with his accomplishments as a computational biologist and visionary, Plumb proved an accomplished stand-up comedian, who flavored his talk generously with witty remarks, keeping the capacity audience engaged and, as often as not, laughing. (Photo courtesy of Steve McCaw) 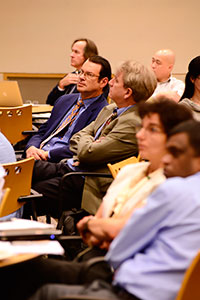 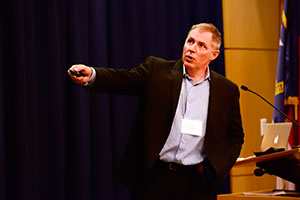 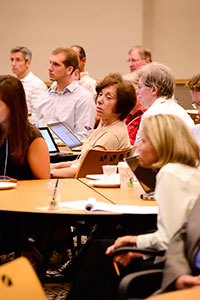 Like its sister cores, the RTI RCMRC also offers supplementary grants for one-year pilot projects to enhance metabolomics research and translation. The program targets investigators new to the metabolomics field, the development of new teams and partnerships, and high-risk and high-impact research. Recipients included six presenters at the symposium: