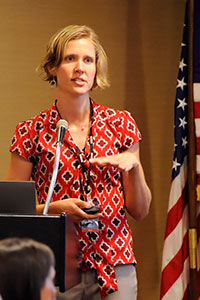 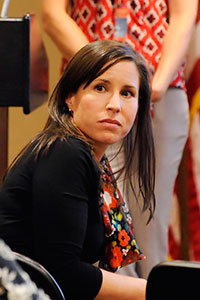 “Dr. Claus Henn’s work is a great example of how environmental epidemiologists are beginning to address exposure mixtures — an important area of emphasis under the NIEHS strategic plan and for the field at large,” said Dilworth (Photo courtesy of Steve McCaw)

Researchers have long known that metals, such as arsenic and lead, can be toxic to the body. The scientific literature is full of articles relating the negative human health effects from exposure to one of these elements. However, Birgit Claus Henn, S.D., wants to understand the physiological repercussions, in particular, the neurodevelopmental impacts, produced by exposure to combinations of metals.

Claus Henn, a research associate in the Department of Environmental Health at Harvard School of Public Health, talked about her work July 15 as part of the NIEHS Keystone Science Lecture Seminar Series. Caroline Dilworth, Ph.D., and Danielle Carlin, Ph.D., health scientist administrators in the NIEHS Division of Extramural Research and Training (DERT), co-hosted the seminar, in support of the NIEHS strategic plan goal on combined exposures.

Claus Henn prefaced her presentation by saying the brain is the most complex system in the body, and its complexity is due in large part to how it develops. The brain undergoes a series of specific development stages — proliferation, migration, selective cell loss, synaptogenesis, and myelination — that begin prenatally and continue into early adulthood. If any phase is disrupted by toxic insult, subsequent downstream processes will be impaired.

“The prevalence of autism worldwide has increased 20-30 times since the 1970s, and diagnosis rates for ADHD have increased 3-5 percent every year since the late 1990s,” she said. “Some increases are due to changes in disease definition and an increase in disease recognition, but there are other determinants, such as hereditary factors, gene-environment interactions, and chemical exposures.”

Data from other labs indicate that metals tend to interact with each other. Claus Henn and colleagues previously studied a cohort of Mexican children exposed to manganese and lead. Children with high levels of manganese had lower neurodevelopment scores and experienced lead toxicity, compared to children with lower manganese in their blood.

Tar Creek, Oklahoma, is a Superfund site, and the researchers tested prenatal exposure to manganese, lead, and arsenic using maternal blood from 225 mother and infant pairs. The scientists collected the mothers’ blood at time of birth and assessed neurodevelopment at age 2.

Using weighted quantile sum regression and standard regression models, the research team determined that children with the most metals in their bodies performed poorly on performance tests of mental development. In addition, the models suggested that the largest cause — 70 percent — of poor mental development was due to manganese exposure, with 25 and 5 percent attributed to lead and arsenic, respectively.

The Brescia, Italy, region has long had a ferroalloy industry and is also an area of elevated Parkinson’s disease and Parkinson-like syndrome. Claus Henn’s team measured exposure to manganese, lead, copper, and chromium in 497 children, aged 11-14, living in the region.

The children completed an 87-item behavior self-assessment, including hyperactivity, anger control, and inattention. Claus Henn used Bayesian kernel machine regression to determine that the amount of manganese in their bodies was associated with degree of changes in self-reported ADHD-like behaviors, and varied by lead levels. Copper and chromium did not appear to be associated with behavior, or to influence the manganese-behavior association.

Thaddeus Schug, Ph.D., also a DERT health scientist administrator, attended the talk. He believed Claus Henn’s studies will play an important role in environmental research. “Birgit’s innovations in statistical modeling provide us with the opportunity to analyze whether coexposure to metals causes more severe impacts on neurodevelopment than exposure to the individual metals alone,” Schug said.

Claus-Henn received a National Institutes of Health Pathway to Independence Award and has since parlayed that research into a career in pediatric environmental health. She will begin a faculty position at Boston University in January 2015.