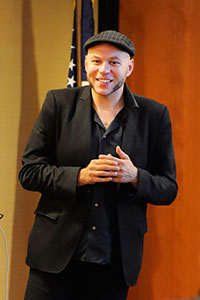 Ballengee answered a question about why hind limbs appear to be targeted by predators. “In the case of anurans, as the legs emerge, forelimbs are protected by the gills,” he explained. Additional factors may involve nutrient content, easier removal, “or maybe they’re more tasty,” he added, laughing. (Photo courtesy of Steve McCaw)

Art and science work together to enhance understanding of the causes of amphibian limb deformities in the work of Brandon Ballengee, Ph.D., who presented an NTP seminar July 17 on “Predation Induced Limb Deformities in Southern Quebec Amphibians.”

In response to a rash of discoveries of malformed frogs, NTP researched whether chemical exposures could account for the malformations, a project initiated by a 1997 NIEHS public workshop, according to seminar host Stephanie Smith-Roe, Ph.D., genetic toxicologist with NTP. “Ballengee’s seminar was an opportunity to revisit the field,” Smith-Roe said. “We are keenly interested in understanding how chemicals affect various organisms, because that can inform how those same chemicals might affect human health.”

Ballengee, a visiting scientist at the McGill University Redpath Museum in Montreal, was the first to report that selective predation by dragonfly nymphs caused missing limbs in anurans, or frogs and toads. In addition to discussing his findings, Ballengee shared some of the ways he uses art and participatory research, or citizen science, to advance research and awareness of ecological concerns.

Dragonfly nymphs with a taste for tadpoles

Awareness of amphibian limb deformity has been building since the 1990s, and many researchers have searched for causes in chemical contamination, or impacts of endocrine disrupting chemicals. While this work has resulted in reports of possible reasons for deformed and multiple limbs, there have been few insights into missing limbs.

Ballengee, in a study published in 2009, reported that dragonfly nymphs prey on tadpoles, particularly on the developing hind limbs. He conducted his research in wetlands degraded by pollutants, where the number of species able to survive is diminished. This may account for the increased predation on anurans. Ballengee speculated that perhaps because the wounds heal without leaving a scar, predation was overlooked as scientists concentrated on developmental causes, rather than selective predation.

Exploring how art and science can further each other

Ballengee has worked in several locations, including Slovenia, Italy, Ireland, and England, to train the public in what he terms participatory biology. Volunteers are trained to catch, document, and sort specimens, but Ballengee does the scoring himself, to preserve data quality. Such assistance enables him to collect more data than he could alone, with the added benefit of raising awareness among participants regarding environmental risks to amphibians in particular, and the environment more generally.

His own artwork also raises awareness. As he worked with frogs in the lab, Ballengee became interested in the artistic possibilities of the images (see slideshow, below). Besides the prints, Ballengee creates sculptural installations, which concern changes in aquatic ecosystems that affect all species, including fish and mammals.