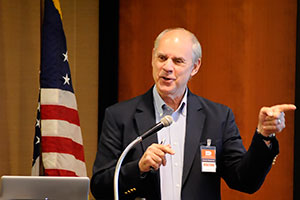 Stegeman spoke warmly of the intellectual and scientific environment at Woods Hole. “You have planetary science to biomedical science and everything in between,” he said. “By being there, you become more broadly engaged than you otherwise might.” (Photo courtesy of Steve McCaw) 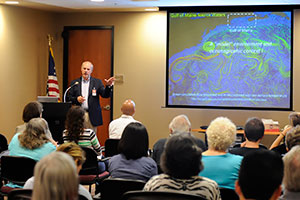 Speaking to a full room, Stegeman described several of the cutting-edge tools that provide data his center uses to track and refine prediction of toxic algal blooms. (Photo courtesy of Steve McCaw) 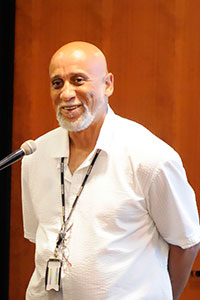 Tyson hosted Stegeman’s talk. In introducing him, Tyson revealed that Stegemen is not only an esteemed scientist, but also an accomplished vocalist who has performed at the Guggenheim Museum Bilbao in Spain. (Photo courtesy of Steve McCaw)

John Stegeman, Ph.D., senior scientist at the Woods Hole Oceanographic Institution presented an NIEHS Keystone Science Lecture Seminar Series talk to a full house May 29, discussing “Plankton to P450: Models and Mechanisms at the Convergence of Oceans and Human Health.”

Stegeman is also director of the Woods Hole Center for Oceans and Human Health (COHH), and a project leader in the Boston University Superfund Research Program.

“John Stegeman has a long-standing association with NIEHS and is well-known to the Institute through his many contributions to environmental health science, as well as his collaborative associations with several NIEHS researchers,” said lecture host Frederick Tyson, Ph.D., who oversees the NIEHS Oceans and Human Health program. “We were pleased he was able to spend the day with us, discussing his cutting-edge research.”

Contaminants released into the ocean in one location can circulate globally via dispersal, affecting global food sources and disrupting ecosystems. Stegeman’s research seeks to understand molecular toxicology and its connections with seafood availability, pollution, and climate change.

Stegeman’s proximity to the ocean, both physically and through his successful research, led him to describe himself as an accidental oceanographer, in addition to a biochemist. “The connection between oceans and the well-being of life on earth is hard to overstate,” he said.

COHH uses novel molecular sensor technologies and modeling approaches to address questions driving ecotoxicology research. Stegeman’s talk highlighted several of these approaches, including the Environmental Sample Processor designed by Christopher Scholin, Ph.D., of the Monterey Bay Aquarium Research Institute. Deployed in the Gulf of Maine, it sends real-time data on the presence of marine species, in the gulf, to the labs of COHH scientists.

In a model pond on Cape Cod, another submersible sensor, known as Imaging FlowCytobot (IFCB) identifies species, size, and abundance of phytoplankton, also in real-time. According to Stegeman, in 2013, for the first time in nearly 20 years, there was essentially no toxic algal bloom in the study area. Data from IFCB and other sensors will be critical in unraveling the reason behind this important occurrence, providing essential insight into population dynamics of toxic phytoplankton.

Epigenetic changes associated with toxin exposure, and developmental origins of disease, are also studied in Stegeman’s lab, especially with respect to neurological diseases. “Shellfish beds are closed to fishing when the presence of toxins reaches a certain level. Below those limits, there are still toxins present,” Stegeman said. “No one has any real knowledge of the effects of those lower levels, particularly from developmental exposure.”

In fish and humans

Stegeman ended his seminar by discussing cytochrome P450 (CYP), a large and diverse group of enzymes that catalyze the oxidation of organic substances. He has been a leader in studies of P450 systems, including functional studies and molecular modeling in aquatic organisms.

Stegeman is particularly interested in a novel CYP gene, CYP20, that is highly expressed in the hippocampus and other regions of the brain involved in cognitive function, learning, and memory — regions that are implicated in Alzheimer’s and other neurodegenerative diseases. Stegeman’s studies are addressing roles of CYP20 in zebrafish. His group is also exploring whether ortho PCBs, known to alter zebrafish activity levels, might involve CYP20.

David Miller, Ph.D., head of the NIEHS Laboratory of Toxicology and Pharmacology, has known Stegeman for almost 40 years. They share a passion for marine models, and have gotten to know each another at various events through the years. “John has been a leader in the field for a long time,” Miller said.

(Shannon Whirledge, Ph.D., is a research fellow in the NIEHS Molecular Endocrinology Group.)