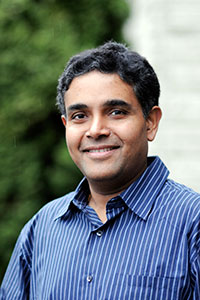 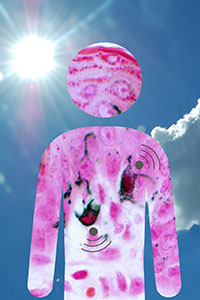 The study outlined the process by which solar UVB radiation can cause melanocytes to alter their immune responses, leading to melanoma. (Photo courtesy of Oregon State University)

NIEHS-funded researchers at Oregon State University (OSU) have identified a biochemical process that can cause normal and healthy skin cells to transform into cancerous melanoma cells. The work, published May 8 in PLOS Genetics, may help predict melanoma vulnerability and also lead to future therapies. Melanoma is the deadliest form of skin cancer and more than 70,000 new cases are reported in the U.S. every year.

“We believe this is a breakthrough in understanding exactly what leads to cancer formation in melanoma,” said Arup Indra, Ph.D., associate professor in the OSU College of Pharmacy. “We’ve found that some of the mechanisms which ordinarily prevent cancer are being switched around and actually help promote it.”

“The results of this research highlight the complexity of interactions between cell types and tissues within the body, and the important role immune surveillance plays in the prevention or development of cancer,” said NIEHS Division of Extramural Research and Training health scientist administrator Mike Humble, Ph.D. “It nicely demonstrates how research on environmental exposures and genes can ultimately lead to the identification of new targets for the diagnosis and treatment of melanoma.”

“In melanoma, the immune system is getting thrown into reverse,” Indra said. “Immune cells that previously were attracted to help deal with a problem are instead repulsed.” The key to this process, the researchers said, is a protein called retinoid-X-receptor, or RXR. When present in an adequate amount, the RXR protein helps the immune response in the skin.

Skin cells called melanocytes produce protective pigments, or melanin, in response to exposure to UV radiation in sunlight. However, even with the protection of melanin, both melanocytes, and skin cells called keratinocytes, routinely suffer genetic damage. Sometimes the damage is repaired, and at other times the immune response, in the presence of adequate levels of RXR in the melanocytes, kills the defective cells before they become malignant.

When levels of RXR are too low in the melanocytes, this protective process breaks down. Chemicals that can help control mutated cells are instead suppressed, and the conditions for cancer develop. DNA-mutated melanocytes begin to thrive, as other skin cells die and free up space for the growing, mutating melanocytes. The ultimate result can be melanoma, which in turn can spread throughout the body.

“When there isn’t enough RXR, the melanocytes that exist to help shield against cancer ultimately become part of the problem,” Indra said. “It’s routine to have genetic damage from sunlight, because normally those cells can be repaired or killed if necessary. It’s the breakdown of these control processes that results in cancer.”

According to Indra, this process has not before been outlined in its entirety. “It’s quite possible that a new and effective therapy can now be developed, based on increasing the levels of RXR,” he said. One possibility would be a diagnostic test to determine when RXR levels are lower than they should be. Lower RXR levels would set the stage for melanoma and possibly other cancers. Careful monitoring of RXR levels could facilitate earlier diagnosis.

Researchers may also be able develop ways to stabilize or stimulate the levels of RXR expression, perhaps through diet or a drug that could deliver RXR to cells, forming the basis for a therapy, Indra said.

(This story was adapted from an article by David Stauth, a science writer with OSU News and Research Communications.)