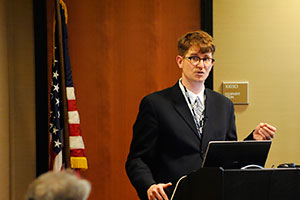 Trasande, who has an M.D., as well as a master’s degree in health care policy, served as an advisor to Senator Hillary Clinton on children’s and environmental health. He is perhaps best known for a study published in the 2012 Journal of the American Medical Association associating BPA exposure in children and adolescents with obesity. (Photo courtesy of Steve McCaw) 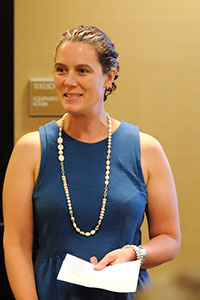 Leonardo Trasande, M.D., engaged a room full of scientists with compelling evidence that exposure to environmental chemicals carries important economic costs, during a June 9 Keystone Science Lecture Seminar Series talk. Trasande, an NIEHS grantee, is an associate professor in pediatrics, population health, and environmental medicine at the New York University (NYU) School of Medicine, and in health policy at the NYU Wagner School of Public Service.

“The broad and widespread environmental exposure that we experience today not only produces information asymmetry, but it is also causing market inefficiencies,” Trasande said. Information asymmetry refers to a difference in knowledge between buyers and sellers. Lack of information on the buyer’s part leads to uncertainty about the health hazards associated with the product. Such hazards can eventually lead to market inefficiency, through costs imposed by human health impacts, he explained.

According to Trasande, exposure to environmental hazards may directly affect an individual’s health, and indirectly increase health care costs, in both developed and developing countries. He pointed out that in 2008, the U.S. spent $76.6 billion on diseases of environmental origin in children, or about 3.5 percent of U.S. health care costs. In the developing world, the annual costs associated with childhood lead exposure amounted to $1 trillion, which roughly corresponds to 1.2 percent of global gross domestic product.

In 2010, the incidence of premature births that can be traced to exposure to air pollution, especially high in developing countries like India and China, was associated with a social cost of $26 billion worldwide, Trasande noted.

Unfortunately these societal costs are not shared equally across all sectors of society. “The low-income populations, certain racial ethnicities, and subgroups have been disproportionally affected by these environmental exposures, and ultimately, the economic costs are disproportionately borne by these same sections of society,” Trasande said. (See text box for summary of a related study.)

The global eradication of lead from gasoline led to an economic benefit of $2.45 trillion, due to the benefits of increased IQ in children born after lead was banned, as well as other health benefits and reduced criminality, said Trasande. More recently, he estimated the economic costs associated with childhood obesity and adult coronary heart disease, potentially due to BPA exposure, to be $1.49 billion and $1.50 billion, respectively.

Regulatory action to substitute BPA in the lining of aluminum cans with an alternative free of health effects could potentially produce $1.74 billion in economic benefits — nearly equivalent to the $2.2 billion cost of substitution with oleoresin, one proposed alternative.

“If we swap out BPA with BPS, we’re potentially losing out on the opportunity to save on health care costs and other costs associated with human exposure to endocrine disrupting chemicals,” Trasande said. He recommended that economic costs be analyzed when studying health impacts of environmental exposures.

(Deepa Singh, Ph.D., is a visiting fellow in the NIEHS Mechanisms of Mutation Group.)

Other researchers are finding economic impacts as well. Frederica Perera, Dr. P.H., Ph.D., and colleagues reported that a modest reduction in outdoor PAH levels can result in a significant improvement in lifetime earnings. The results were published May 8 in the Journal of Public Health Policy. PAHs are a group of over 100 different chemicals formed during the incomplete burning of coal, oil and gas, garbage, and other organic substances, like tobacco or charbroiled meat. The earnings estimate was based on the findings of a prospective cohort study in a low-income population of pregnant women and their children in New York.

The researchers, funded in part by NIEHS, estimated that a reduction in PAH levels to 0.25 nanograms per cubic meter, from the current estimated annual mean PAH concentration of 1 nanogram per cubic meter, would result in a gain in IQ of 0.86 points. Perera and colleagues further estimated the impact of the IQ gain to be a 0.96 percent increase in total earnings per person. Depending on the assumptions used, the increase could amount to $46-$215 million for each year’s cohort of children. This suggests that substantial economic benefits could result from a moderate reduction in ambient PAH levels.