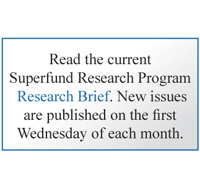 PBDEs were widely used as flame retardants in furniture, carpet padding, car seats, and other consumer products, until most were removed voluntarily from the market a decade ago. However, nearly all homes and offices still contain some PBDEs. To study the effects of prenatal exposure to PBDEs, the research team measured PBDE levels in 309 women, at 16 weeks of pregnancy, from 2003 to 2006. Their children were then followed to age 5.

The researchers found that a 10-fold increase in PBDE concentrations during early pregnancy, when the fetal brain is developing, was associated with a 4.5-point decrease in IQ and a 3.3-point increase in hyperactivity at age 5. The authors call for further research to understand the impact of PBDE exposure on the developing brain, noting the importance of investigating chemicals and other flame retardants that have replaced PBDEs.

Researchers funded by NIEHS developed a high throughput microscopy approach for examining how bisphenol A (BPA) and similar chemicals affect alpha and beta estrogen receptors, which are the primary targets of BPA and other endocrine disrupting chemicals. Applying this approach on a large scale could offer a faster, more cost-effective way to determine if BPA alternatives are safe.

Because of concerns surrounding BPA’s possible effects on development, reproduction, and metabolism, BPA analogs, compounds with a similar molecular structure, are replacing BPA. Many of these analogs have not been thoroughly analyzed, so their potential for endocrine disrupting activity is unknown. The researchers developed a series of assays for use with high throughput microscopy that can cost-effectively reveal mechanisms of a chemical’s endocrine disrupting activity on a cell-by-cell basis.

Using the new assays, the investigators studied BPA and 18 understudied BPA analogs. They found that BPA and nearly all the analogs bound to alpha or beta estrogen receptors. But even at the highest dose tested across multiple assays, some of the analogs were inactive or had very low activity in other functional endpoint assays, indicating that receptor binding alone should not be used to classify activity. The authors note that the assays allow classification and identification of a chemical’s endocrine disrupting activity, and are highly complementary with the assays used in the U.S. Environmental Protection Agency ToxCast program.

An NIEHS grantee and colleagues report new details on how cellular machinery detects and signals for repair DNA damage caused by ultraviolet (UV) light. The new findings help explain why people with xeroderma pigmentosum (XP), an inherited disease where the body is unable to sufficiently repair damage caused by UV light, are at an extremely high risk for developing skin cancer.

When DNA is damaged by UV light, a protein called human UV-damaged DNA-binding protein (UV-DDB) recognizes this damage and signals for repair. To better understand how UV-DDB recognizes the damage, the researchers examined the process by tracking single molecules of UV-DDB tagged with light-emitting quantum dots. This let them watch the molecules move from place to place, in real time, on both normal and UV-exposed DNA strands.

The experiments revealed that UV-DDB stops along the DNA strand and transiently attaches to it, causing a change in the protein’s structure. If it comes to a spot damaged by UV radiation, two molecules of UV-DDB converge and stay bound to the site, signaling DNA repair machinery. The researchers also followed a quantum-dot labeled UV-DDB protein with a mutation associated with XP. The mutant UV-DBB could still bind to DNA, but continued to slide along the DNA, rather than remaining at the damaged site to signal that repair was needed.

Researchers, who are part of the NIEHS Breast Cancer and the Environment Research Program, found that urinary concentrations of metabolites of high molecular weight phthalates are associated with later onset of puberty in girls. Phthalates are found in many consumer products, medical devices, and building materials. This research adds to the growing evidence that phthalate exposure may interfere with development.

The researchers measured phthalates in urine collected from 1,170 girls when they were enrolled in the study at ages 6 to 8 between 2004 and 2007. Phthalate concentrations ranged from less than 1 to more than 10,000 milligrams per liter. The researchers followed the study participants and collected information on body size, weight and height, as well as breast and pubic hair development stages, either once or twice per year throughout follow up until 2011. They found that 10-fold higher exposures to high molecular weight phthalates, including di(2-ethylhexyl) phthalate, as estimated from urinary concentrations of metabolites, were associated with an approximately eight-month delay of transition into puberty as marked by onset of pubic hair development. The relationship between phthalate concentration and later puberty was stronger among normal-weight girls.

After adjusting for confounders, the researchers observed no association between low molecular weight phthalate urinary metabolite concentrations and age of puberty onset as defined by onset of breast or pubic hair development. The researchers point out that more studies are needed to determine whether childhood exposures act alone or add to other earlier life insults, and to understand variability in early-life phthalate exposures.