Investigating medications as a source of phthalate exposure 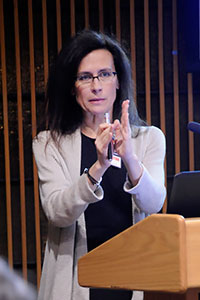 In an NIEHS Epidemiology Branch seminar May 12, Sonia Hernandez-Diaz, M.D., Dr.P.H., associate professor of epidemiology at Harvard University, shared the evolution of her studies of potential phthalate exposure from some frequently prescribed medications, demonstrating how ingenuity and perseverance propel research forward.

Phthalates are a class of chemicals commonly used as plasticizers and solvents. In animal studies, phthalates have been associated with birth defects in offspring, namely male genital malformations, and Hernandez-Diaz said it was natural to suspect that similar effects in humans might result from exposure to phthalates in the environment.

“As a result of the wide use of phthalates, humans are exposed to phthalates via ingestion, absorption, and inhalation, and offspring can be exposed through in utero maternal exposure. So we began to wonder about medications as an exposure source,” she explained.

In particular, two common phthalates, diethyl phthalate (DEP) and dibutyl phthalate (DBP), are used in coatings of medications and supplements, to control the release of active ingredients. Hernandez-Diaz and colleagues, including Allen Wilcox, M.D., Ph.D., head of the NIEHS Reproductive Epidemiology Group, hypothesized that phthalates in medications taken by pregnant women might be associated with adverse health outcomes in offspring. In order to prove this hypothesis, researchers first had to determine which medications contained phthalates and investigate the exposure burden.

Since no published list of medications containing phthalates existed, the group combed through product packaging, patents, and databases, and even contacted manufacturers and distributors directly. Through this systematic search, the team identified more than 110 products with phthalates. Approximately 50 prescription drugs and 65 over-the-counter medications and dietary supplements contained DEP or DBP, while more than 90 products contained other phthalates.

Having developed a list of medications containing phthalates, they next focused on estimating the U.S. population’s exposure to phthalates via medications. Using data from the National Health and Nutrition Examination Survey (NHANES), which asked individuals about the prescriptions they took in the last 30 days and obtained urinary concentrations of 13 phthalate metabolites for a subsample, she found that those who had taken the drugs mesalamine, didanosine, omeprazole, and theophylline had higher concentrations of phthalate metabolites in their urine than those who did not. These medicines are used for a variety of conditions, including ulcerative colitis, HIV, dyspepsia, gastroesophageal reflux disease, and respiratory diseases, like asthma and chronic obstructive pulmonary disease.

To focus specifically on women of childbearing age, Hernandez-Diaz and colleagues then looked at data from the Environment and Reproductive Health (EARtH) Study. Similar to NHANES, women in the EARtH Study self-reported medication use and provided urinary samples. Again, women who took mesalamine or omeprazole had higher concentrations of phthalate metabolites in their urine than those who did not, though estimates were based on a limited number of users. Both the NHANES and EARtH Study results suggest that humans, including women of childbearing age, are exposed to phthalates in medications.

The next step was to investigate the association between exposure to phthalates in medications during pregnancy and male genital malformations, such as hypospadias and cryptorchidism, in offspring, using the Slone Epidemiology Center Birth Defects Study.

From defining the exposure, to estimating associations with health outcomes, Hernandez-Diaz’s research on phthalates in medications illustrates the innovative and collaborative process that drives environmental health research.

“This story is an example of how things can happen in epidemiology and be fun and interesting when you have collaboration among scientists with different expertise,” Hernandez-Diaz said.