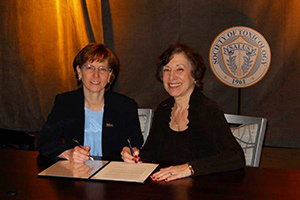 Birnbaum, right, and Lehman-McKeeman at the official signing of the MOU between NIEHS and SOT. (Photo courtesy of Robin Mackar) 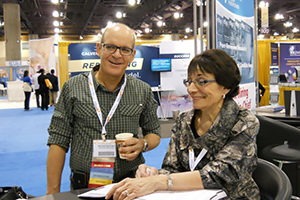 Annette Kirshner, Ph.D., right, of DERT, played a lead role in setting up the successful NIEHS resource funding room. Above, she is shown at the NIEHS exhibit helping Michael Aschner, Ph.D., a grantee from Albert Einstein College of Medicine of Yeshiva University. (Photo courtesy of Robin Mackar) 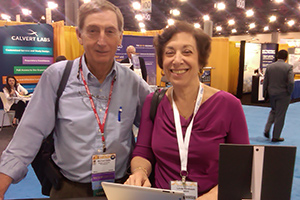 At the yearly SOT meeting, toxicologists get to make new acquaintances and meet up with colleagues from the past. Birnbaum, right, is shown sharing information and smiles with Michael Gallo, Ph.D., of Robert Wood Johnson Medical School at the University of Medicine and Dentistry of New Jersey. (Photo courtesy of Robin Mackar) 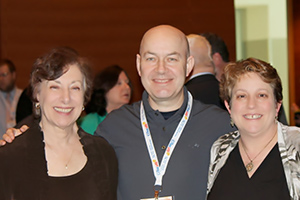 At the MOU signing ceremony, Nigel Walker, Ph.D., of NTP, center, joined with Birnbaum, left, and Dori Germolec, Ph.D., who is an SOT Counselor. (Photo courtesy of Robin Mackar)

When the 53rd annual meeting of the Society of Toxicology (SOT) in Phoenix concluded March 27, there was a consensus among the NIEHS and NTP delegation that it fulfilled its mission of showcasing cutting-edge science and providing opportunities for people to network and form new collaborations.

Among the more formal collaborative events at this year’s conference was the signing of a memorandum of understanding (MOU) between SOT and NIEHS, at a preconvention ceremony Sunday afternoon, March 23. The signing set forth a framework for an alliance between NIEHS and SOT, to foster a shared dedication to provide global leadership toward creating a safer and healthier world, by increasing the impact of the science of toxicology.

“We’ve always had a very good working relationship with SOT, but this memorandum will provide us with even more opportunities to collaborate, as we both work to identify, characterize, and prevent diseases associated with the environment,” said NIEHS and NTP Director Linda Birnbaum, Ph.D., as she signed the document with SOT president Lois Lehman-McKeeman, Ph.D.

The sunny, warm weather at the meeting might be one factor that contributed to the enthusiasm for the meeting, but another was the presence of many talented high school, undergraduate, graduate, and postdoctoral students who were at many of the sessions asking forward-thinking questions.

The students were engaged during an undergraduate program offered Sunday, as Birnbaum talked about her own winding career path.

They were also very vocal at the Monday afternoon featured session, “A Conversation with the Director of NIEHS,” chaired by Norbert Kaminski, Ph.D., of Michigan State University.

The format of the session was conversational and welcoming. With Birnbaum and Kaminski seated on stage, and about 200 people in attendance, there were no slides, creating an environment that encouraged audience participation.

A few questions from Kaminski about the NIEHS budget and strategic plan kicked off the conversation, which was soon followed by questions from the audience. Queries ranged from predictive toxicity efforts, arsenic, and droughts, to peer review of grants and the new collaboration between NIEHS and the World Health Organization. Birnbaum thoughtfully addressed each question.

“I’m thrilled to see so many undergraduates here,” Birnbaum said, as many made their way to the podium. One asked about some of the challenges Birnbaum faced as she developed her own career path and what advice she would offer to students.

“Always be willing to try something new,” she said. “Try working with a new collaborator, try out your crazy ideas, and don’t be afraid to fail. Failure can teach us valuable lessons.”

Birnbaum ended the informal session by announcing that NIEHS is searching for a new editor-in-chief for the journal Environmental Health Perspectives. (https://ehp.niehs.nih.gov/) Hugh Tilson, Ph.D., who has held the position since 2007, recently announced his retirement.

In addition to the numerous posters and talks by NIEHS and NTP scientists, the NIEHS resource funding room proved very popular. Division of Extramural Research and Training (DERT) program representatives staffed the room for two days, providing one-on-one-consultation for individuals interested in grants and training. 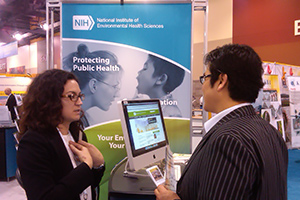 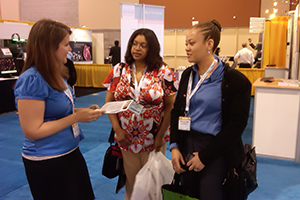 Tammy Collins, Ph.D., left, who leads the NIEHS Office of Fellows’ Career Development, was very busy during the conference, talking to many postdocs about positions at NIEHS and NTP. (Photo courtesy of Robin Mackar) 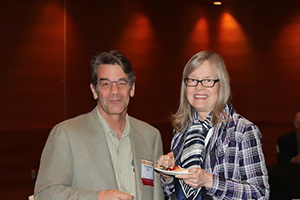 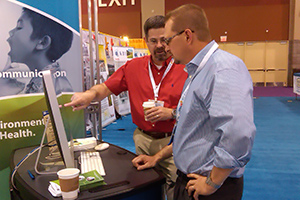 Cesta, left, showed many people, including fellow NTP toxicologist Scott Auerbach, Ph.D, the capabilities of the new NTP Nonneoplastic Lesion Atlas. Auerbach was sought out by many to talk about predictive toxicology efforts at NTP. (Photo courtesy of Robin Mackar) 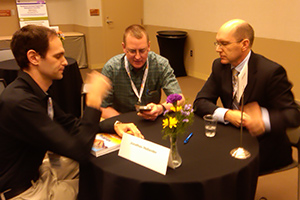 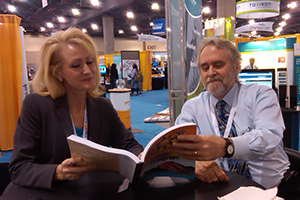 Christine Flowers, left, NIEHS communications director, and Pat Mastin, Ph.D., of DERT, look over the SOT program, to decide what to attend next. Flowers oversaw the design of the popular NIEHS exhibit. (Photo courtesy of Robin Mackar) 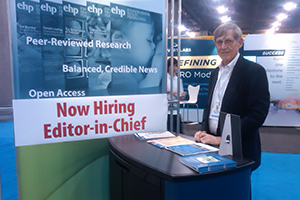 Tilson talked to many people at SOT about the editor-in-chief role he is about to leave. He announced his retirement in March after 40 years of federal service. Efforts are underway to fill this important position. (Photo courtesy of Robin Mackar) 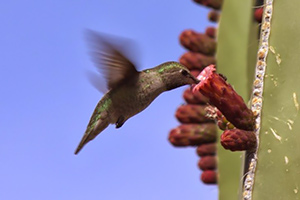 Although the meeting was packed with science talks, some found time to explore the beauty of Phoenix. This hummingbird was having breakfast at the botanical gardens. (Photo courtesy of Nigel Walker) 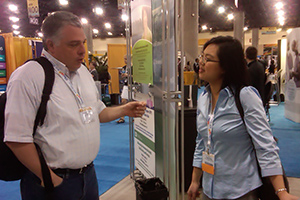 Michael DeVito, Ph.D., left, of NTP, took time to talk to some of the enthusiastic students eager to hear about NTP work currently underway and get advice on choosing a career path. (Photo courtesy of Robin Mackar) 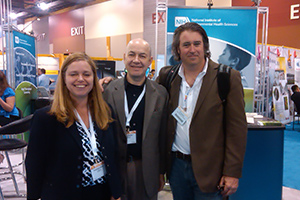