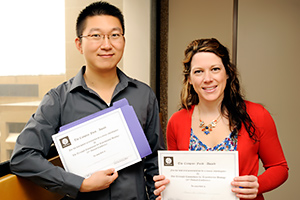 Award winners Liu, left, and Whirledge had reason to smile about their awards and the substantial cash prize involved. Their honors reflect the rigorous training in written and oral presentation skills, as well as critiques they’ve received from colleagues in LRDT and LST. (Photo courtesy of Steve McCaw) 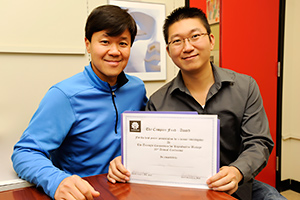 Liu’s relationship with Yao began at UI, where Yao was an associate professor prior to joining NIEHS. “There are things I’ve learned from him that I think will be beneficial for the rest of my life,” Liu said. (Photo courtesy of Steve McCaw) 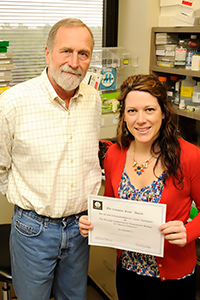 Cidlowski, left, hosted Whirledge’s presentation on her research at the Feb. 4 meeting of the NIEHS Receptor Mechanisms Group. (Photo courtesy of Steve McCaw)

Two NIEHS trainees received recognition at a symposium March 8 in Research Triangle Park, N.C., winning top awards for their presentations during the 23rd annual meeting of the North Carolina Triangle Consortium for Reproductive Biology (TCRB). The awards include cash prizes of $2500 from the Campion Fund.

Shannon Whirledge, Ph.D., an Intramural Research Training Award fellow in the Laboratory of Signal Transduction (LST), won for best oral presentation in competition with two other NIEHS trainees and a trainee from the East Carolina University Brody School of Medicine. A poster presentation by Chang Liu, a predoctoral fellow in the Laboratory of Reproductive and Developmental Toxicology (LRDT), received top honors in the competition that included 35 posters.

TCRB is a thriving organization that brings together scientists focusing on reproductive biology from leading biomedical research organizations and has more than 200 members, representing 18 institutions from throughout North Carolina. The symposium was sponsored by NIEHS and the Leppert Foundation, whose goal is to provide and sponsor research that will lead to healthier lives, pregnancies, and birth (see story).

Whirledge, a graduate of the Baylor College of Medicine, joined the Molecular Endocrinology Group headed by John Cidlowski, Ph.D., in 2009. The focus of her work at NIEHS is the glucocorticoid receptor (GR) signaling in the uterus. In addition to her Campion award, Whirledge has received honors from the Endocrine Society and the Society for the Study of Reproduction (SSR). Her 2012 study on GR signaling and uterine fibroids received special recognition from the journal Hormones and Cancer (see story).

“John has been incredibly supportive of this project since I came to NIEHS in 2009,” Whirledge said of her mentor. “He is very excited about evaluating the role of glucocorticoid receptors throughout the body, especially the link between glucocorticoid receptor signaling and fertility. He believes stress and fertility will provide a basis for my career as an independent researcher.”

“In addition to the support from my own lab, the LRDT groups have given me a wealth of knowledge and technical support,” Whirledge continued, “in particular Dr. Kenneth Korach’s group, Dr. Carmen Williams, and Dr. Humphrey Yao.”

Liu joined the Reproductive Developmental Biology Group headed by Humphrey Yao, Ph.D., in 2009 as a visiting predoctoral fellow after completing a master’s degree at the University of Illinois (UI) at Urbana-Champaign. Liu’s award-winning work investigated cell lineage establishment during organogenesis using mouse models and how defects in this process affects fertility.

Liu also won the Lalor Foundation Merit Award and the SSR Trainee Research Award at the SSR meeting in September 2013 in Montreal (see story). He credits the success at both meetings to the training experience he is receiving at NIEHS.

“NIEHS has a lot of resources for research so that I can apply whatever is needed to answer important questions,” Liu said of his fellowship experience. “I feel very lucky to have Humphrey Yao as my mentor, who has put a lot of effort into training and preparing me for an academic career.”

For Yao and Cidlowski, the TCRB symposium is a great place for students and professors in the Triangle area to exchange ideas and present their exciting work, and it also encourages collaborations. The format of the meeting this year was different, because it offered fellowships for the first time that supported awards for trainees.

(Deepa Singh, Ph.D., is a visiting fellow in the NIEHS Mechanisms of Mutation Group.)

This work demonstrated for the first time that the glucocorticoid receptor can profoundly affect uterine functions by direct action on the uterus itself and not through the brain’s hypothalamic-pituitary-gonadal axis alone. These results suggest that the glucocorticoid receptor regulates uterine biology and fertility through uterine-specific actions.

Despite the functional importance of theca cells in follicle development, very little is known about their origin and process of differentiation. Liu’s work provides clear evidence that the theca cells of the ovary have two origins during development — the gonadal somatic progenitor cells and the mesonephros. Understanding the origin of these cells in the developing fetus assists in the understanding of the normal process of development and how diseases such as infertility and ovarian cancer may arise.