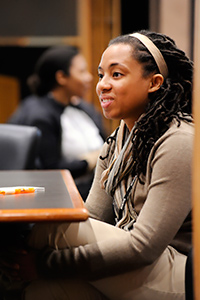 Although Churchill, above, had seen Walker at meetings and talks, she’d never had occasion to have his full attention for a five-minute conversation, before she landed at his station during the flash mentoring session. (Photo courtesy of Steve McCaw) 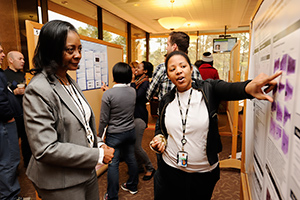 NTP caught a flash wave that’s been sweeping NIH recently, with a mentoring and poster session for trainees March 20 in the NIEHS Rodbell Auditorium. Ten senior scientists and ten trainees, ranging from predoctoral fellows to research fellows, attended the event, which was moderated by Suzanne Fenton, Ph.D., head of the Reproductive Endocrinology Group in the NTP Laboratory.

Flash mentoring refers to a rapid-fire verbal interchange, typically around five or six minutes in length, between a senior figure, or mentor, — in the case of NIEHS and NTP, a lead scientist or program manager — and a less experienced individual, typically a trainee, job seeker, or aspiring employee. The mentor and trainee discuss career development issues, in a situation that’s been described as similar to speed dating, with mentees rotating to different people every few minutes.

The exercise, which is often used by businesses to meet new customers, helps participants learn to think quickly and network effectively, in about the same amount of time available during refreshment breaks at meetings and symposia. This flash mentoring sessions was especially timely, because several of the trainees were on their way to the annual meeting of the Society of Toxicology.

In the case of the NTP event, it also gave staff housed in separate buildings a chance to learn more about the various offices, branches, and labs in the Division of NTP (DNTP) and interact with people they may not have met or talked with before. “This was a great way to bring everyone together,” Fenton said afterwards.

“Like a well-developed thunderstorm, it’ll be over before you know it,” Fenton told participants in her opening remarks. She warned them that the stopwatch on the screen at the front of the room would keep ticking to signal when to move from one station to the next. Participants had 5 ½ minutes to talk, with 30 seconds allowed for moving to the next flash interaction.

The room quickly came to life with the buzz of ten conversations happening simultaneously. Typically, mentors described their work and the sometimes-unexpected developments in their own career paths. Trainees discussed their work in NTP programs, their goals, and their career concerns.

Several trainees made new friends and potentially important contacts. “Stop by any time and talk,” said Darlene Dixon, D.V.M., Ph.D., lead of the Molecular Pathogenesis Group in the NTP Laboratory, to several of the young people who met with her.

“We needed this,” Fenton said of the experience. “This was awesome.” Although she could not be present, because she was giving an invited lecture, Angela King-Herbert, D.V.M., led the planning of this event, along with Dixon, Fenton, and Michelle Hooth, Ph.D. 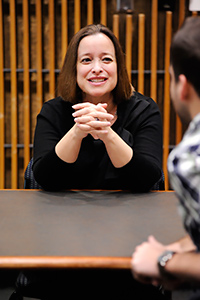 Hooth offered insights about networking during her talk with Filgo. They seemed to agree that flash mentoring is an idea whose time has come, in science, as well as business. (Photo courtesy of Steve McCaw) 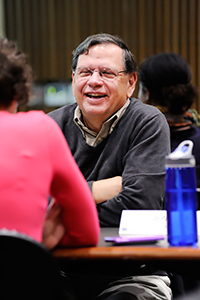 Tice was clearly enjoying his flash conversation with Goldsmith, proving that business and fun can readily mix. One of Tice’s recommendations could apply to anyone — trainee or senior scientist. “You need to broaden your horizons,” he said. (Photo courtesy of Steve McCaw) 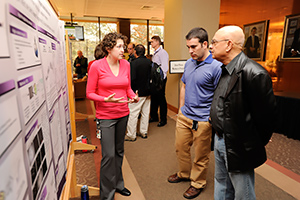 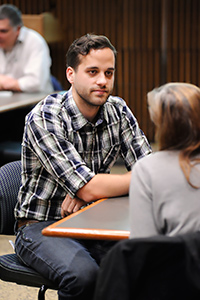 During one of his first stops, predoctoral trainee Filgo quizzed Lunn about the Report on Carcinogens, a high-profile publication NTP produces every two years for the Secretary of the U.S. Department of Health and Human Services. (Photo courtesy of Steve McCaw) 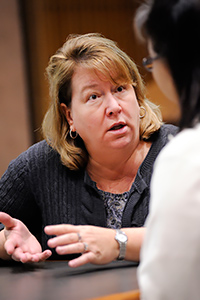 Fenton devoted most of her attention to monitoring the time, but she jumped in toward the end when trainees ran out of new mentors to visit. She is shown talking with Surh about her own career path, which took her from the U.S. Environmental Protection Agency to NIEHS and NTP in 2009. (Photo courtesy of Steve McCaw) 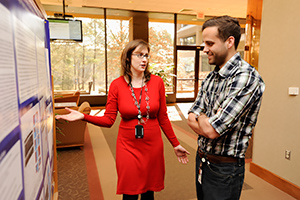