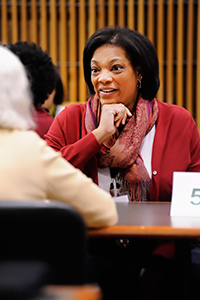 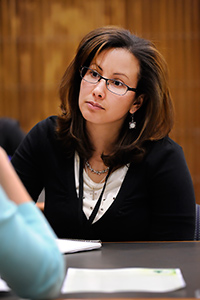 Lysandra Castro, biologist in the NTP Molecular Pathogenesis group, was one of more than 30 mentees who registered for the session. (Photo courtesy of Steve McCaw)

In what officials promise is much more than a name change, NIH celebrated the new Office of Equity, Diversity, and Inclusion (EDI) with a full schedule of activities March 24-27 (see text box) that included a special flash mentoring session at NIEHS.

Although most of the events were webcast to Research Triangle Park (RTP), N.C. from the NIH campus in Bethesda, Md., NIEHS employees came together to share the celebration kickoff March 24 in Rodbell Auditorium and view the EDI Summit Opening Plenary. As part of the “NIH Women’s Symposium 2014 — Looking Back, Moving Forward,” they returned to Rodbell Auditorium on Mar. 26 for a videocast of the Women’s symposium, and then the “Flash Mentoring Session for NIEHS Scientific and Administrative Staff with Senior Leadership,” organized by an NIEHS planning committee chaired by Joan Packenham, Ph.D.

Underscoring the NIH commitment to EDI

For the past year and a half, beginning with the appointment of Director Debra Chew in 2012, the NIH Office of Equal Opportunity and Diversity Management (OEODM) has been evolving into the new NIH Office of EDI. The strong NIH commitment to excellence in the principles of EDI was evident in comments by speakers in the Opening Plenary, including Director Francis Collins, M.D., Ph.D.

“Our mission will only be effectively accomplished if we establish a creative environment that is equitable and gives everyone the chance to make their contribution in the most productive way,” Collins said.

Chew discussed the orientation and goals of the new office. “We are looking to make a paradigm shift, to move past processing complaints of discrimination,” she said. “We aspire to a state of equity and fairness within NIH, for all individuals to advance their careers.”

The morning’s agenda featured presentations on the history of women’s contributions at NIH, by Stetten Museum curator Michele Lyons, of the Office of NIH History, and an Opening Plenary about the challenges that federally employed women face in the workplace, with a focus on NIH employees.

A breakout session on women and leadership provided the audience an opportunity to question panelists directly. NIEHS Director of Management Joellen Austin responded to a question about traits panelists value when hiring for a leadership position. “I look for evidence the candidate has been willing to take on tough jobs, especially those no one else wants,” said Austin, echoing Rockey’s earlier advice. She later described moments in her own career trajectory when she took advantage of unexpected opportunity.

The final event of the day was the flash mentoring session, held in parallel at both NIH and NIEHS. Joan Packenham, Ph.D., introduced the NIEHS session as a series of short, focused conversations around specific questions. Referring to the morning’s presentations, Packenham noted that more women than men work at NIH, but not as many hold leadership positions. “A focus on mentoring can help us to address that,” she said.

With that, dozens of mentors and mentees began 10-minute conversations, building networks and receiving feedback on questions such as how to find a mentor, how to get to know people beyond one’s team or department, and queries specific to each woman’s own career. With mentors, both women and men, representing all parts of the Institute, there was an abundance of listening, advice, and new connections made. 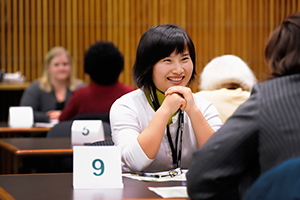 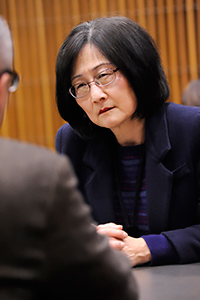 In her role as K-12 Science Education & Outreach Coordinator, Hue-Chen Lao is both a mentor to students and, here, a mentee in her own career development. (Photo courtesy of Steve McCaw) 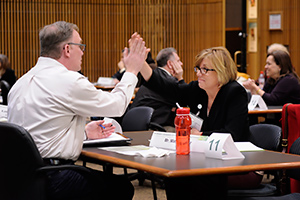 Rodbell Auditorium was vibrant with energy and enthusiasm, such as this congratulatory moment between mentor Matthew Burr, chief of the Administrative Management Branch, and Cathy Jamison, coordinator of the Scholars Connect program. (Photo courtesy of Steve McCaw) 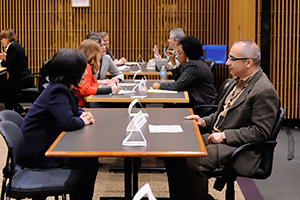 Building EDI from a diverse customer base

In the course of re-visioning OEODM into the Office of EDI, staffers underwent a period of intense program evaluation that included customer surveys, focus groups, interviews, and a rigorous examination of the program to better serve its customers; impact civil rights, diversity, and inclusion; and make a lasting difference in the NIH culture and workforce demographics.

To celebrate the launch of EDI, stakeholders involved in building the new Office of EDI participated in a full schedule of events, breakout sessions, and training.