A visit from the Dalai Lama — not an ordinary science talk 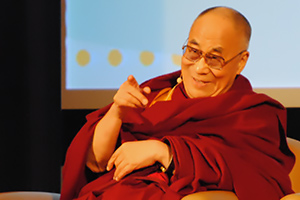 The Dali Lama took center stage with a smile, a laugh, and an attitude that could warm the soul. (Photo courtesy of Melissa Kerr) 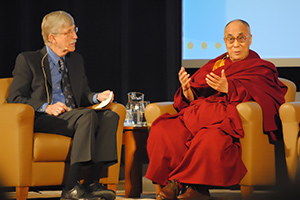 Collins and the Dali Lama discussed the role that science plays in human flourishing. (Photo courtesy of Melissa Kerr)

March 7 was an extraordinary day for NIH, as the Tibetan Buddhist Dalai Lama gave a presentation about the role of science in human flourishing, as part of the J. Edward Rall Cultural Lecture series. Some NIEHS staff members were able to attend in person, and others tuned in via webcast.

With three large, cozy chairs at center stage in the NIH Natcher Conference Center Ruth L. Kirschstein Auditorium in Bethesda, Md., and a man adorned in a regal red and gold robe, there was every indication that this was not going to be an ordinary science talk.

Tenzin Gyatso, the 14th Dalai Lama and a self-described simple Buddhist monk, is the spiritual leader of the Tibetan people. He received the Nobel Peace Prize in 1989 and has authored or co-authored more than 110 books. Since the 1980s, he has worked with scientists to introduce modern science into the traditional curriculum of Tibetan monastic institutions.

Science and the mind

After his introduction by NIH Director Francis Collins, M.D., Ph.D., the Dalai Lama received a standing ovation. He bowed to the packed crowd and graciously took the middle seat, with his interpreter at his side. From there it was a freestyle talk, without PowerPoint slides or podium — just a man talking informally about hope, love, the mind, and science.

“I admire science and have a deep respect for it,” he said in a quiet voice. “But science alone won’t bring inner peace.” Genuine peace can only come from love, he added.

“Scientists are very open-minded and objective, and they are full of skepticism and doubt, which is highly necessary for their work.” But the Dalai Lama believes that to achieve a deeper level of happiness, scientists can’t neglect to develop the inner self.

Reflecting on some of the research he had seen on a tour with Collins prior to the afternoon talk, he referred to these contributions as signs of hope and seemed genuinely touched by the drawings that children at the NIH Children's Inn made for him. He also expressed amazement at the role science could play, mentioning the way advanced technology was helping a 13-year-old girl with cerebral palsy to function better.

Questions from the NIH Director and audience

The talk became a bit more structured when Collins asked the Dalai Lama a few questions, which audience members had submitted ahead of time. After an expansive response to the question of whether science has a role to play in explaining altruism, the Dalai Lama concluded that basic human nature is compassionate and positive.

He stopped, looked at Collins, and said, “I’m ready to argue with you about this,” and then gave a contagious laugh that had the audience laughing along with him. Collins smiled and replied, “I love your answer to that and I’m not going to argue.”

One of the final questions was a good-humored inquiry about whether the Dalai Lama ever had a bad day or got mad. “Often I lose my temper over small things. Big things, almost never.” He told how a reporter once asked him a question about the legacy he wanted to leave. “I’m a Buddhist monk — I want no legacy attached to my name.” The reporter wove the same question into her interview two more times. “And on the third time — then I got mad,” he said. Collins quickly followed up with a promise to never ask him a question more than once.

The Dalai Lama left all who heard him with a bit more to ponder about how to lead a more peaceful and meaningful life. 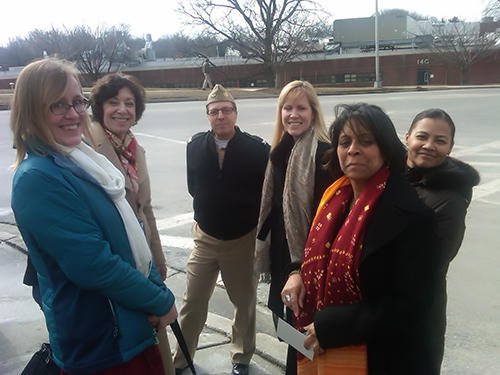