Obesity primes the colon for cancer 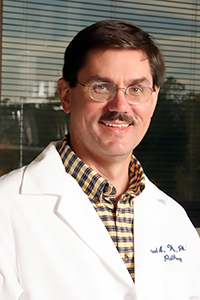 According to Wade, the results of the mouse study suggest that being excessively overweight activates signals in the colon that lead to the progression of cancer. (Photo courtesy of Steve McCaw) 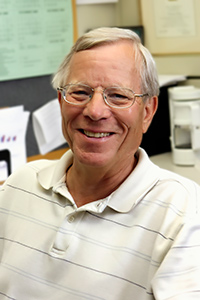 Eling and his group discovered the NAG-1 gene several years ago when they treated mice with nonsteroidal anti-inflammatory drugs. (Photo courtesy of Steve McCaw)

Obesity, rather than diet, causes changes in the colon that may lead to colorectal cancer, according to an NIEHS study published online April 1 in the journal Cell Metabolism. The finding bolsters the recommendation that calorie control and frequent exercise, key to a healthy lifestyle, are also a strategy to lower the risk for colon cancer, the second leading cause of cancer-related death in the United States.

A large body of scientific literature says people who are obese are predisposed to a number of cancers, particularly colorectal cancer, Eling said. To better understand the processes behind this link, he and his colleagues fed two groups of mice a diet in which 60 percent of the calories came from lard. The first group of mice contained a human version of a gene called NAG-1, which has been shown to protect against colon cancer in other rodent studies. The second group lacked the NAG-1 gene.

The NAG-1 mice did not gain weight on the high-fat diet, while mice that lacked the NAG-1 gene grew plump. Another striking difference between the two groups of animals was also discovered.

“The obese mice exhibited molecular signals in their gut that led to the progression of cancer, but the NAG-1 mice didn’t have those same indicators,” Eling said.

The researchers looked for molecular clues by isolating cells from the colons of the mice and analyzing a group of proteins called histones. Histones package and organize DNA in a cell’s nucleus, and sometimes undergo a process known as acetylation, in which chemical tags bind to the protein surface. The pattern of acetylation varies depending on the chemical processes taking place in the cell.

“Any preexisting colon lesions in these animals are more likely to evolve rapidly into malignant tumors,” Wade said. “The same thing may happen in humans.”

Wade and Eling want to find out exactly how obesity prompts the body to develop colorectal cancer. Wade said that the likely candidates for triggering tumor growth are fat cells, but there are many more possibilities. Finding these cellular switches may give lead to improvements in treatment and prevention of colorectal cancer.

“Once we identify the signaling pathways and understand how the signal is communicated, we may be able to design ways to treat colorectal cancer in obese patients,” Wade said.

(Sheila Yong, Ph.D., is a visiting fellow in the NIEHS Inositol Signaling Group.)


"Prevalence of allergies the ..." - previous story