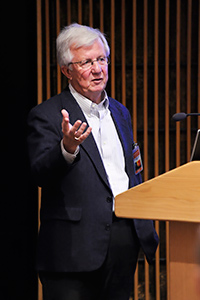 Peterson suspected that developing organisms were more susceptible to environmental influences, leading to his insights about the impacts of dioxin on zebrafish embryo hearts. (Photo courtesy of Steve McCaw)

During a seminar March 5, NIEHS-funded environmental toxicologist Richard Peterson, Ph.D., presented pioneering work that implicated dioxin-like chemicals in the mysterious disappearance of lake trout in Lake Ontario in the 1950s. His findings also shed new light on birth defects of the human heart.

Watch as Peterson's colleagues, Jessica Plavicki, Ph.D. and Warren Heideman, Ph.D., discuss recent findings on the effects of dioxin on the developing heart. (3:02)

For decades, the fishing communities around Lake Ontario knew something was very wrong in the lake. In the 1940s, the lake trout population rapidly declined, and by the 1950s, it was wiped out. Even a restocking campaign in the 1960s and 1970s failed. Yet no one knew just what caused the lake trout to disappear.

Peterson’s account of his NIEHS-funded search for the answers was co-sponsored by the NIEHS Office of the Director and Laboratory of Signal Transduction.

It’s all in the dioxin

Peterson, deputy director of the NIEHS Center for Developmental and Molecular Toxicology at the University of Wisconsin–Madison (UW), and his research team collaborated with scientists from the U.S. Environmental Protection Agency, searching for answers. They hypothesized that the depletion of lake trout was the result of embryo mortality from exposure to environmental contaminants, specifically 2,3,7,8-tetrachlorodibenzo-p-dioxin (TCDD) and related compounds.

“What became clear in the 1970s was that some other event, besides predation of eggs, low genetic diversity, competition, and low stocking densities, was preventing lake trout embryos from developing into viable yearlings that were recruited into the population,” said Peterson.

“We had an idea that the recruitment failure was the result of dioxin exposure, and that lake trout embryos were very sensitive to this contaminant,” he explained. “But, at the time, we had no toxicological data to support our hypothesis, and we had no idea what the target organ was that caused the near extinction of the lake trout.”

“Blue sac disease in fish embryos is characterized by extensive edema, malformations, and cardiovascular dysfunction, and there is no recovery from this condition,” explained Peterson. "It impairs development of the fish embryo heart, resulting in heart failure and mortality.” Peterson and his longtime UW collaborator Warren Heideman, Ph.D., demonstrated this in zebrafish.

Taking their team’s discovery one step further, they investigated the epicardium, the outer cell layer of the heart. Research had previously suggested that the epicardium contributes to development of the heart valves, outflow tract, and ventricle.

“We postulated that TCDD exposure impairs the development of the zebrafish embryo epicardium, leading to heart malformation and failure,” Peterson said. “After one hour of TCDD exposure, the embryo hearts develop normally for the first 48 hours. During this time, no heart toxicity is detected. However, between 48 and 120 hours, right at the time the epicardium is forming, zebrafish embryos show signs of high dioxin sensitivity, which results in heart malformation and heart failure.”

“We see striking similarities in the disease process of hypoplastic left heart failure between dioxin-exposed zebrafish embryos and newborns with this disorder,” said Peterson. “The human condition also occurs during embryonic development, and results in an abnormally small left ventricle, and impaired heart valves and outflow tract, culminating in heart failure and newborn mortality.”

Peterson noted that dioxin exposure assessments are limited in humans, and more research is needed to establish a clear association between dioxin-like chemicals and congenital heart defects in humans.