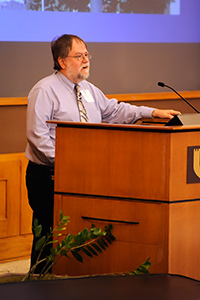 Levin provided a warm welcome to the attendees. He opened the symposium by discussing the many reasons for decreasing developmental neurotoxic exposures, including moral, public health, medical, and economic considerations, as well as national security. (Photo courtesy of Steve McCaw) 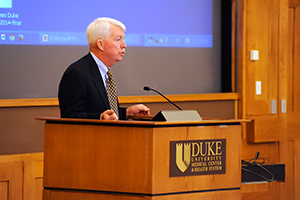 Landrigan, who is director of the Mount Sinai Children’s Environmental Health Center, enlightened the audience about the lack of testing for new synthetic chemicals before they are used in products in the United States. He encouraged the active participation of Congress, regulators, and interest groups to use scientific evidence to effect policy change.
(Photo courtesy of Steve McCaw)

The Duke University Integrated Toxicology and Environmental Health Program (ITEHP) held its spring symposium March 7 on the Duke campus in Durham, N.C. Funded in part by NIEHS, the event was organized and moderated by Duke University Medical Center professors Edward Levin, Ph.D., of the department of psychiatry and behavioral sciences, and Susan Murphy, Ph.D., of the department of obstetrics and gynecology.

Experts in developmental toxicology, medicine, and psychology gave talks on their research and clinical work related to the symposium’s theme, “Cognitive Impairment Caused by Developmental Neurotoxic Exposure: Mechanisms, Consequences, and Therapeutic Treatment.” The event attracted a capacity audience of researchers and clinicians, including many from NIEHS.

The symposium began with keynote talks by NIEHS grantees Philip Landrigan, M.D., of the Icahn School of Medicine at Mount Sinai, and Frederica Perera, Dr.P.H., Ph.D., of Columbia University, on the vulnerable brains of the developing child.

Landrigan caught the audience’s attention with updates on the main neurotoxic culprits in the environment, as well as by highlighting how inadequate regulation allows relatively unstudied synthetic chemicals to be used in products. He also explained what he called the epidemiologic transition, which is a change in focus due to the decrease in frequency and severity of infectious diseases. “Life expectancy has doubled in the past century, so what's happened to replace the infectious diseases are the chronic diseases,” he said.

Like Landrigan, Perera and her colleagues are finding that many chronic diseases come from preventable exposure to chemicals in the environment. She described her group’s molecular epidemiological studies in New York, Poland, and China, pointing to the effects of maternal hardship and products of combustion on children’s cognition and behavior. When changes are made to reduce these exposures, she said, “Everyone benefits.”

The far-reaching impacts of toxicity

Exposure to lead was the topic of a presentation by NIEHS grantee Kim Dietrich, Ph.D., of the University of Cincinnati (UC), who was part of the Cincinnati Lead Study. Major research studies have brought attention to the economic and societal costs of lead exposure, which were especially high in urban areas while it was a component of gasoline.

Dietrich explained that children are most exposed to lead during their early years, when hand-to-mouth activity is at its highest. Since lead toxicity has come to the attention of the public, particularly with the link of higher blood levels to IQ deficits, Dietrich and others have also been able to associate blood lead with behavioral issues, including a striking increase in likelihood of criminal behavior.

Duke psychologist Scott Kollins, Ph.D., then talked about the attention deficit-hyperactivity disorder (ADHD) phenotype, pointing to the mass of chemicals whose effects are largely unknown, but appear linked to the dramatic increase in ADHD diagnoses.

Talks continued after lunch with a focus on pesticides, nicotine, and manganese exposures. Levin opened the afternoon session with his talk on the cognitive effects of developmental exposure to pesticides and nicotine in rat and zebrafish models.

Theodore Slotkin, Ph.D., also of Duke, described his findings that prenatal nicotine exposure predisposes the brain to nicotine addiction in adolescence. “Smoking during pregnancy is the cause of transgenerational addiction,” Slotkin argued.

Concluding the day of talks was a presentation by UC researcher Charles Vorhees, Ph.D., on cognitive and behavioral effects of developmental exposure to manganese and stress in rats. Vorhees compares the responses of normal and treated rats in swimming tests, using the Cincinnati Water Maze (see story).

Despite progress in understanding the detrimental effects of chemical exposures, symposium speakers agreed that scientists, clinicians, policymakers, and the general public continue to have much work to do, to fully understand the extent of the cognitive effects from past and present exposures, and, most importantly, prevent risky toxicants from being introduced into the environment in the future. 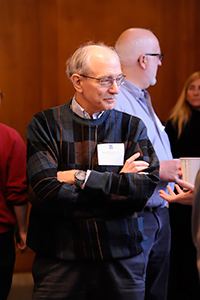 NIEHS Deputy Director Rick Woychik, Ph.D., was among Institute scientists attending the symposium. He and others enjoyed discussing the topics during session breaks. (Photo courtesy of Steve McCaw) 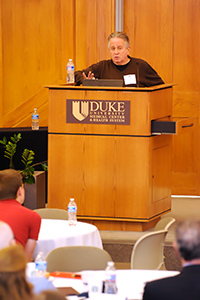 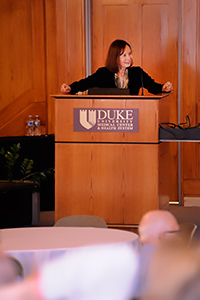 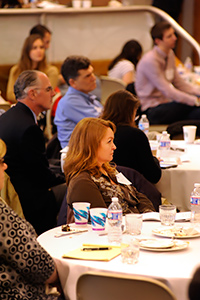 NIEHS postdoctoral fellow Maile Henson, Ph.D., center, was among many NIEHS researchers in attendance. Henson is a member of the Synaptic and Developmental Plasticity Group headed by Serena Dudek, Ph.D. (Photo courtesy of Steve McCaw)