Jetten explores the role of Glis proteins in development and disease 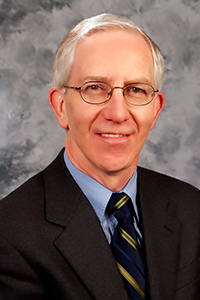 Jetten is also a member of the affiliated faculty at the NIH Center for Regenerative Medicine, which supports research into the applications of stem cell biology to address the causes, rather than the symptoms, of diseases. (Photo courtesy of Steve McCaw)

Anton Jetten, Ph.D., head of the NIEHS Laboratory of Respiratory Biology, discussed his research on Gli-similar (Glis) proteins, with the potential of these proteins as novel therapeutic targets in a regenerative approach to treating disease. Jetten spoke March 4 at North Carolina State University.

In his talk, "GLIS Transcription Factors: Mechanism of Action and Roles in Development and Disease," Jetten discussed his lab’s work on the identification and characterization of Glis proteins, their physiological function, and their role in the development of diabetes and kidney disease.

Certain DNA sequence variations, called single nucleotide polymorphisms (SNPs), in GLIS3 are associated with increased risk for diabetes. Jetten found that several of these are present at a high frequency in a group of North Carolina patients. “Genetic factors, like SNPs in GLIS3, together with environmental factors, such as obesity, high-fat diet, or environmental exposures to chemicals, may promote the development of glucose intolerance and the risk for diabetes,” he said.

To study the physiological function of Glis proteins, Jetten and his group developed several mouse models, where the genes for the proteins were inactivated, or knocked out. While the GLIS1 knockout mice displayed no overt phenotype, or obvious clinical features, GLIS2 and GLIS3 knockout mice provided excellent models for studying the role of the proteins in diabetes and kidney disease.

GLIS3 knockout mice died prematurely, due primarily to the development of neonatal diabetes and showed a dramatic loss of insulin-producing beta cells, which are critical for maintaining normal blood glucose levels.

“To understand the role of GLIS3 in different diseases, we have to know what the target genes are in different tissues,” said Jetten. He then provided evidence that GLIS3 directly regulates neurogenin 3 and insulin gene expression, factors that are critical in the development of beta cells and the maintenance of their function.

A current experimental approach for the treatment of diabetes involves stem cell replacement therapy. Given the physiological role of GLIS3 in beta cell development, Jetten is interested in how the role of GLIS3 in the differentiation of stem cells into insulin-producing beta cells could be used therapeutically. As researchers learn more about the function of GLIS3, Jetten hopes that this protein will become a valid therapeutic target for the treatment of diabetes. “It’s likely that upstream signals regulate GLIS3 activity, and one of our major goals at the moment is to understand what those upstream signals are,” he said.

In contrast to current state-of-the art insulin replacement therapies, Jetten looks forward to the development of a way to address the long-term complications of diabetes. “If we know what these signals are, we may have a tool to increase GLIS3 activity and enhance insulin production, and this could be a strategy to be used in the future for therapy.”