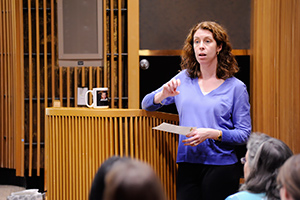 Adelman, who organized and hosted the event, said of Moore, “She’s been a hero of mine since I first met her nine years ago. Her lab works on the questions she addresses in many different ways. They do everything from single-molecule biophysics, to looking at some of the causes of neurodegeneration.” (Photo courtesy of Steve McCaw) 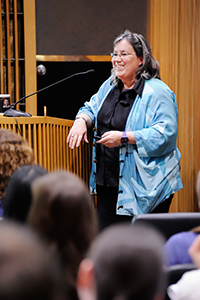 Moore’s zest for science was evident throughout her lecture. For example, she told her listeners, “I have a basic theory - if I can think of it, biology’s done it, and biology can do a lot more things than I can think of.” (Photo courtesy of Steve McCaw)

Moore is a professor of biochemistry and molecular pharmacology and co-director of both the RNA Therapeutics Institute and the Neurotherapeutics Institute at the University of Massachusetts Medical School (UMMS). She is also a Howard Hughes Medical Institute investigator. Moore’s lab focuses on eukaryotic RNA processing and metabolism.

In her lecture, Moore described important discoveries that shed new light on how RNA is transported at the cellular level, and the diseases that can result when the process goes awry.

RNA is made in the nucleus of the cell, but to become translated into proteins, it needs to move into the cytoplasm, where the machinery for translation resides. It had long been assumed that the only way for that to happen was for RNA complexes to squeeze, one by one, through tiny holes in the membrane surrounding the nucleus, known as nuclear pore complexes.

A collaborative effort between Moore and the lab of Vivian Budnik, Ph.D., also at UMMS, resulted in discovery of a novel mode of transport in which large packages of RNA, called ribonucleoprotein complexes (RNPs), exit the nucleus by budding directly through the nuclear membrane.

“The bottom line for this story is that the nuclear pore is not the only way out of the nucleus,” Moore explained. “There is another pathway.”

Moore said that the budding transport mechanism has been documented in many eukaryotic cell types, including yeast and human cells, such as neurons. “Once you know what you’re looking for, you can see these things everywhere,” she said. “We do believe it is a universal process.”

Multiple proteins are involved in budding, and mutations in any of them can disturb this process. Such mutations are associated with genetic diseases such as progeria, the condition characterized by premature aging, and dystonia, a neurological movement disorder.

“The budding process is clearly linked to multiple human diseases whose mechanistic basis was not previously understood,” Moore noted.

A new way to visualize RNAs

The second section of Moore’s talk dealt with her lab’s work characterizing the structure of large RNA complexes, such as exon junction complexes (EJCs) and messenger RNPs (mRNPs).

Until now, scientists thought of messenger RNA (mRNA) as a free-floating, single-strand string in the cell, with various proteins binding along the strand, known as the beads on a string model. Looking at a specific complex bound onto mRNA, Moore instead found that the protein complexes appear to aggregate with the RNA to form more complex, tightly bound structures in which the proteins interact with each other, as well as with the RNA itself. This helps the RNA fold up. So, instead of being a linear molecule in the cell, it is actually a globular complex.

According to Moore, the structure of the complex can alter how other molecules interact with it, and whether certain portions are accessible on the surface or are buried below the surface. In theory, this folding serves to protect the RNA from the many enzymes in the cell that could degrade naked RNA, or RNA with no proteins bound to it. 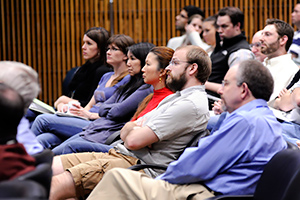 Lecture attendees learned about discovery of a novel mode of RNA transport in the cell, and a new way to visualize RNA complexes.   (Photo courtesy of Steve McCaw) 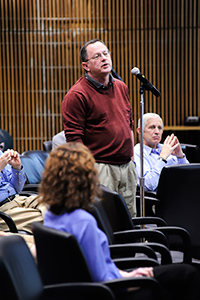