Cholesterol gene may be responsible for increased inflammation 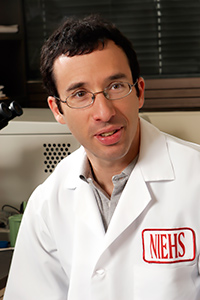 Fessler noted that the NIEHS Clinical Research Unit played a major role in this work. “It was great having the EPR as resource,” he said. “We wouldn’t have been able to do our study without it.” (Photo courtesy of Steve McCaw) 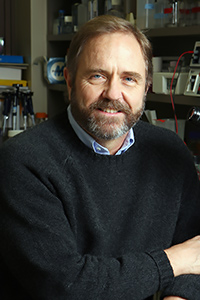 People with a certain form of the cholesterol-controlling gene apolipoprotein E (APOE) may be more prone to inflammation than others, according to a new NIEHS study.

The APOE gene helps to regulate and distribute cholesterol and other lipids in the body. It exists in three forms, or alleles — APOE2, APOE3, and APOE4. The APOE3 allele maintains the proper cholesterol-removing function of the gene. NIEHS researchers and their collaborators were the first to report that people who have APOE4, which does not effectively remove lipids, experience much more robust inflammatory response. They published their results online March 20 in the Journal of Allergy and Clinical Immunology.

Michael Fessler, M.D., an NIEHS researcher and corresponding author on the paper, said that APOE4 has been associated with inflammatory conditions, such as heart disease and Alzheimer’s disease, and that 15-20 percent of the human population has the APOE4 allele.

He noted that doctors can’t yet tailor therapy for a patient based on whether they have APOE4, but it may be feasible soon. In early clinical trials, researchers are using peptides that mimic APOE3 to treat a variety of human diseases, including brain disorders and heart disease. Peptides are small proteins with fewer than 50 amino acids.

“These peptides have been shown to be anti-inflammatory,” Fessler said, “so it’s possible, but not proven, that these APOE peptides could be used in patients — perhaps in patients with APOE4 specifically — to reduce their risk of developing inflammatory diseases.”

All data point to one outcome

The team examined APOE4 and its effects four different ways. First, the researchers used blood samples from the NIEHS Environmental Polymorphisms Registry (EPR), a long-term research project to collect and store DNA from approximately 20,000 North Carolinians. Team members placed samples in test tubes and added lipopolysaccharide (LPS), the major component of the outer surface of bacteria. The researchers found that blood from volunteers with at least one copy of APOE4 produced a more robust inflammatory response to LPS than those with two copies of APOE3.

They saw the same result when they gave another group of volunteers LPS intravenously. People with APOE4 exhibited a higher fever response and more inflammatory proteins in their blood. Next, the team gave LPS to mice genetically engineered to express human APOE4. The mice exhibited a similar enhanced response.

Each segment of the study confirmed APOE4 as a factor that increases inflammation. “This is a good example of first applying basic research findings to a clinical problem, and then returning to the lab to explore the mechanisms of the clinical effect,” said co-author and NIEHS researcher Perry Blackshear, M.D., D.Phil.

APOE4 and other illnesses

Fessler said future work will investigate whether APOE4 can contribute to additional common inflammatory diseases. He added that scientists have found variations in other genes that may affect inflammation in humans, but in most cases, these variations have not been demonstrated using cells from patients.

Fessler is glad that his work has added APOE4 to the list of genetic determinants of inflammatory risk in humans. He believes the collective outcome of future studies will shape the next wave of medicine. “With this information, physicians could one day customize or tailor prognoses and treatment based on a panel of genetic and environmental risk factors,” Fessler said.