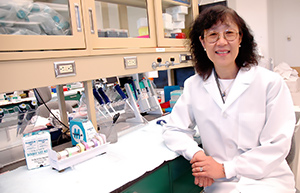 "Prostate cancer is the second most common cancer among men in North America, and one in six men will develop it over their lifetime,” said Ho. "Major contributing factors other than age are race and family history, whereas little is known about the impact of endocrine disruptors on prostate cancer.” (Photo courtesy of University of Cincinnati Medical Center)

A new study by Shuk-mei Ho, Ph.D., and colleagues at the University of Cincinnati (UC), funded in part by NIEHS, provides preliminary evidence of an association between bisphenol A (BPA) exposure and the occurrence of prostate cancer in humans. Until now, the endocrine-disrupting compound BPA was linked to cancer risk in animals, but human, or clinical, data was lacking.

The study, published in the March issue of the journal PLOS ONE, found a significant difference between the levels of BPA in the urine of 27 men with prostate cancer and 33 men without prostate cancer. According to a UC press release, this research provides the first evidence that urinary BPA levels may be a marker for prostate cancer.

Higher BPA levels were associated with low levels of the prostate cancer marker PSA in patients under 65, which has implications for cancer diagnosis. “High levels of BPA exposure may mask early diagnosis, by lowering PSA, creating a false negative,” said Ho, director of the Cincinnati Cancer Center, and Jacob G. Schmidlapp, professor and Chair of Environmental Health at the UC College of Medicine.

Interestingly, the difference between urinary BPA levels was more significant in men under the age of 65. “Higher urinary BPA may be associated with early onset prostate cancer, or may occur because the younger patients belong to a generation born right after BPA was introduced for commercial use,” explained Ho.

She also pointed out that BPA exposure is widespread. “High urinary levels indicate lifestyle habits that are conducive to chronic high exposure,” she said. “If BPA has effects on prostate cancer development and progression, then removal of the toxicant will be an effective method to ameliorate prostate cancer risk and incidence.”

According to Ho, to see a link in this relatively small number of urological patients was surprising. “This supports the need for a larger-scale study — one with long-term clinical follow-up — to confirm the association between BPA and prostate cancer,” she said.

In addition to the clinical evidence, Ho’s research group performed in vitro studies in cancerous and noncancerous prostate cells, to identify potential mechanisms of BPA-induced transformation. Using immunofluorescence, they found an increased rate of abnormalities in the centrosomes, organelles required for cell division, of prostate cells treated with BPA.

Importantly, centrosome abnormalities, a hallmark of malignant transformation, were observed at low levels of BPA exposure. The researchers also observed an increase in the cancer-like growth pattern of one prostate cancer cell line exposed to low doses of BPA.

These findings suggest a mechanism underlying the role of BPA in cellular transformation and disease progression, according to Ho. Further studies are needed to determine if BPA indeed contributes to prostate cancer development, and to better understand the effects of BPA on prostate cells.

Citation: Tarapore P, Ying J, Ouyang B, Burke B, Bracken B, and Ho SM. 2014. Exposure to bisphenol A correlates with early-onset prostate cancer and promotes centrosome amplification and anchorage-independent growth in vitro. PLoS One 9(3):e90332.