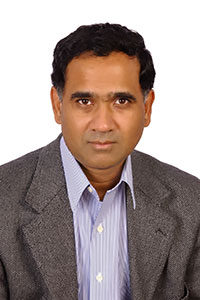 Peddada credits NIEHS with helping his career flourish. “I think that it is a biostatistician’s dream job to be working in a data-rich environment such as the one that we have here,” he said. (Photo courtesy of Steve McCaw) 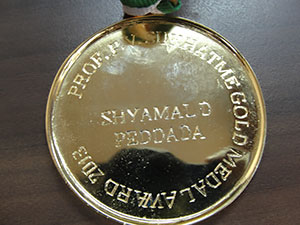 Peddada’s award is named for Pandurang Vasudeo Sukhatme, Ph.D., D.Sc. (1911-1997), one of the leaders in the establishment of IASRI. In addition to his fundamental contributions to survey sampling, Sukhatme is recognized as a pioneer in the application of statistical methods in studying human nutrition. (Photo courtesy of Shyamal Peddada)

During the 67th ISAS annual conference Dec. 18-20, 2013, at Banaras Hindu University in Varanasi, India, Peddada was awarded the 2013 Professor P.V. Sukhatme Gold Medal Award in absentia for significant contributions to the field of statistics or agricultural statistics. ISAS recognized Peddada’s career-long work in statistical theory and methods, as well as his collaborative research in cell biology, environmental health, fibroid growth in women, the microbiome, and toxicology (see text box).

“This award is a testament to the impressive range of Shyamal’s research,” said Clarice Weinberg, Ph.D., head of the NIEHS Biostatistics Branch. “It also underscores his valuable contributions to interdisciplinary research in the environmental sciences.”

Building on a grand tradition of (bio)statistics

Peddada readily acknowledged the influence that some of the outstanding thinkers in 20th century statistics have had on his own work. He also expressed his gratitude for the intellectually stimulating environment at NIEHS.

“Each award that I’ve received is special in its own way,” Peddada said, “and this one is special because it is named for an eminent statistician, P.V. Sukhatme, who made fundamental contributions to the field of survey sampling, which is widely used in the agricultural sciences, epidemiology, social sciences, and many other areas. Foundations for some commonly-encountered terms, such as stratified sampling, multistage sampling, double sampling, and nonsampling errors, are rooted in Sukhatme’s publications in the 1930s to 1950s.”

According to Peddada, statisticians, such as Sukhatme, developed a broadly applicable statistical methodology that is central to his own approach to scientific research. Peddada’s training with one of the greatest statisticians of the 20th century, C.R. Rao, Ph.D., Sc.D., a fellow of the Royal Society and a member of the National Academy of Sciences, also helped shape his approaches to statistical theory, design of experiments, and the practice of statistics.

“My research program in constrained, or order-restricted, inference is influenced by Rao’s interest in solving scientific problems by exploiting all available information,” Peddada explained. “Many scientific problems have implicit constraints or structure, and by making use of such constraints, we arrive at solutions that not only honor the underlying structure, but also result in a powerful methodology.”

During his nearly fifteen-year career as a government scientist, Peddada has taken advantage of that powerful methodology to advance environmental science research, working with teams of NIEHS and NTP epidemiologists, statisticians, biologists, and toxicologists.

A distinguished career in academia and government

Peddada has received numerous awards for his professional accomplishments throughout his career, beginning with his selection as Junior Research Fellow by the Indian Agricultural Statistics Research Institute (IASRI), 1977-1979. He received the American Statistical Association (ASA) Outstanding Statistical Application Award in 1997, and was elected a fellow of ASA in 2005. He is also an elected member of the International Statistical Institute.

Over the past ten years, Peddada has served on the editorial boards for several leading journals, including the Journal of the American Statistical Association, Toxicologic Pathology, and PLOS ONE. He is the author of more than 100 peer-reviewed publications.

Rao completed his own dissertation work at Cambridge University under the direction of Sir Ronald Fisher, a pioneering thinker Peddada described as one of the greatest statisticians of all time.