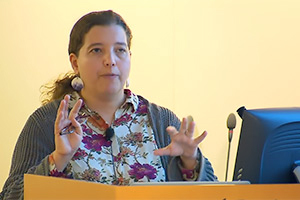 “There’s this process of unlearning the stereotypes,” Tayac said of the healing journey toward mixed-heritage identity. “People still have to disentangle all of that.” (Photo courtesy of NIH) 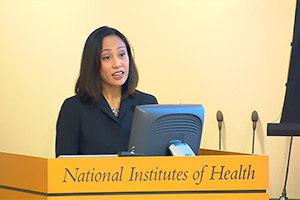 In addition to co-chairing the initiative, Lising is a multicultural health educator at the National Institute of Arthritis and Musculoskeletal and Skin Diseases. (Photo courtesy of NIH) 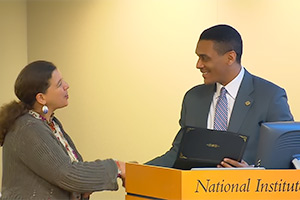 “We’re coming together to celebrate a priority,” Hill remarked, as he presented Tayac with a plaque. Hill is director of the Office of Special Populations at the National Institute on Aging (Photo courtesy of NIH) 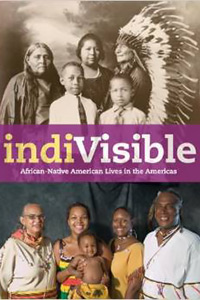 Photos used in the exhibit reflect the mixed African and Native heritage of the so-called black Indians all over the Americas. (Photo courtesy of Smithsonian Institute)

The talk by Tayac was part of the “Healing Our Community Through Narrative: The Power of Storytelling” series organized and hosted by the NIH Office of Equity, Diversity, and Inclusion, in partnership with the Trans-NIH American Indian and Alaska Native (AI/AN) Health Communications and Information Workgroup and the AI/AN Research Interest Workgroup.

Tayac is a mixed-heritage member of the Piscataway Indian Nation and a historian at the Smithsonian National Museum of the American Indian, who holds a doctorate in sociology from Harvard University.

The co-chair of the Trans-NIH AI/AN Health Communications and Information Workgroup, Mimi Lising, introduced Tayac, who was the third speaker in the latest series sponsored by the initiative, which was established in 2005.

As Tayac constructed a narrative of her personal healing journey as a Native American of mixed heritage interwoven with her work creating exhibits that reflect emerging cultural concerns in Native American communities, she made use of several visuals and videos created by the museum. As Lising noted in her introduction, “We are bringing the museum to you.”

Identity as a source of self-concept and, ultimately, health and well-being

Tayac opened her talk by telling the audience, “I’ve been very curious about identity... and how to transfer it into a museum setting.”

Tayac highlighted one traveling exhibit, the sometimes controversial “IndiVisible: African-Native American Lives in the Americas,” in a discussion of identity among people of mixed African American and Native American descent. Each of these communities has grappled with the notion of racial purity and been unsure about how to self-identify their people of mixed heritage.

“Native peoples are not only minorities, but [their identities] are also wrapped up in the notion of sovereignty,” she said. Efforts by governments to categorize them racially have tended to discourage acknowledgement of mixed heritage. “[But] we are still here… [and] we have a 60 percent intermarriage rate,” she continued, pointing to the 560 federally recognized and 200 state recognized tribes in the U.S.

One of the several videos that were part of the presentation featured testimonials by people who are now more likely to describe themselves as black Indians. “I can’t deny either side,” one man said of his acceptance of mixed heritage. “I feel like a part of me was being shut off,” a woman added, reflecting on her feelings as she was growing up in a community that looked down on mixed heritage.

As Tayac moved from presentation to the questions that followed her talk, she and her audience discussed the impact of identity on health and research. Being a minority is increasingly recognized as a source of socio-psychological stress that can contribute to disease in important ways, and the past experiences of minority communities can influence attitudes about participation in biomedical research.

”People get very nervous about any sort of taking of biological material from the body,” Tayac said in response to a question about genetics research. She pointed to one study that some in the Yucci community called the Vampire Project. “There’s this issue of trust,” she said.

Wrapping up the program, initiative co-chair Carl Hill, Ph.D., presented Tayac with a plaque as a token of appreciation. He referred to the biomedical implications of identity on diversity training and health disparities initiatives at NIH.

“This presentation of ethnic identity and its impact on diversity in the biomedical workforce and to pathways that sustain health disparities was on target and relevant to many of our ongoing discussions,” he said.