Science Days spotlights mentor and fellow of the year 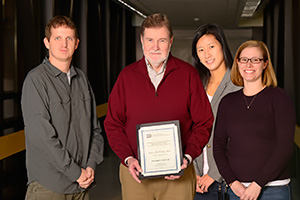 NIEHS 2014 Mentor of the Year, Wilson, was joined by, from left, Freudenthal, along with NTA representatives Kristin Gabor, Ph.D., and Monica Frazier, Ph.D. “I’m extremely honored to receive the award,” he said. (Photo courtesy of Steve McCaw) 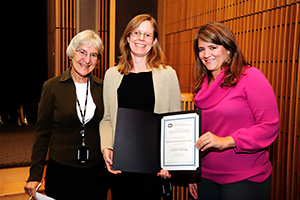 NIEHS 2014 Fellow of the Year Harmon, center, accepted her award from her nominator Baird, left, and Tammy Collins, Ph.D., director of the NIEHS Office of Fellows’ Career Development. (Photo courtesy of Steve McCaw)

These prestigious awards, bestowed on recipients nominated and chosen by the scientists at the NIEHS, recognize those who have made especially significant contributions to research and service.

Fellow of the Year

Harmon, an Intramural Research Training Award fellow in the Epidemiology Branch, is the third annual Fellow of the Year. She was chosen from seven nominees based on her passion and dedication to research, leadership, ability to convey scientific discoveries, collegiality, service, and mentoring. In addition to being recognized for her outstanding achievements, Harmon received a $1,000 travel grant to attend a future scientific meeting.

Harmon was nominated by her mentor, Donna Baird, Ph.D., a lead researcher in the Epidemiology Branch, who said she was delighted to see Harmon acknowledged with such a well-deserved award. Baird first met and was impressed by Harmon during her graduate studies at the University of North Carolina at Chapel Hill, and said she was thrilled when Harmon decided to pursue her postdoctoral training at the NIEHS.

Baird explained that Harmon demonstrates many qualities that make her deserving of this award. “Quaker is highly regarded by her fellow trainees, does award-winning work, and is a great mentor,” Baird said.

Mentor of the Year

Wilson, a senior lead researcher in the Genome Integrity and Structural Biology Laboratory, was selected as this year’s Mentor of the Year by the NIEHS Trainees Assembly (NTA). Bret Freudenthal, Ph.D., a postdoctoral fellow in Wilson’s lab, spearheaded the nomination and explained how he and the more than 50 other trainees that have been mentored by Wilson have been positively affected by their experience.

Many previous fellows wrote in support of Wilson, stating that his mentorship had such a profound impact on their careers and lives that their current achievements would not have been possible without his individualized guidance and support.

The fact that Wilson received the Mentor of the Year award is no surprise to anyone who has followed the careers of his trainees. “Mentoring and training are the most important roles [for lead researchers] at NIEHS,” he said, "and among their highest priority activities." Wilson also said of his approach to his trainees, “Mentoring is multifaceted and special to each trainee.”

(Shannon Whirledge, Ph.D., is a research fellow in the NIEHS Laboratory of Signal Transduction.)