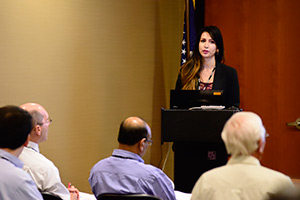 Nina Jaitly, M.D., a contractor for the NIEHS Scientific Review Branch, gave opening and concluding remarks. She is the contact person for the Inflammation Faculty Seminar Series. (Photo courtesy of Steve McCaw) 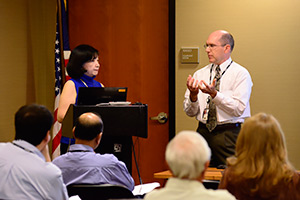 Following her talk, Ting took questions from the audience and from Humble, right. (Photo courtesy of Steve McCaw) 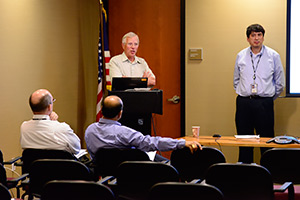 Eling responded to a question, as Schurman, right, looked on. “NAG-1 appears to be a novel protein with potential therapeutic uses in diseases like obesity,” Eling said. (Photo courtesy of Steve McCaw)

Three NIH-funded experts explored the connections between inflammation and obesity Oct. 29 during an Inflammation Faculty Seminar and Webcast.

The talks began with a list of grim statistics about the worldwide spread of obesity, insulin resistance, and diabetes. Ting and Shore made convincing arguments about the adverse effects of obesity-related inflammation on metabolic and respiratory health and response to interventions.

In the final presentation, Eling reported on experiments with transgenic mice that offer the tantalizing possibility of discovering a novel approach to antiaging medicine that might actually live up to the hype. “There is a profound effect on longevity [from overexpressing this gene],” he said.

Dire prospects in an ever-fatter world

With one billion people worldwide overweight and 400 million of them clinically obese, a number expected to increase, the outlook for public health is not good, Ting said as she introduced her subject, “Inflammation and Metabolic Disease.”

In a number of experiments using cell lines and model animals, Ting and colleagues have tested an intriguing hypothesis — that saturated fatty acids in the diet can induce inflammasome activation via the normal fatty acid metabolic pathway. Like a fire burning out of control, inflammation spreads throughout the body, especially through the action of the cytokines interleukin-1 beta (IL-1 beta) and tumor necrosis factor alpha.

“It’s really IL-1 that’s blocking insulin sensitivity,” she said, “[but] both of these cytokines are equally important.”

Obesity-related inflammation in the lung

Ting’s reference to inflammation in the lung as related to a high-fat diet segued nicely into Shore's discussion of the synergy of obesity and ozone as a trigger for asthma and airway hyper-resistance, “Responses to Acute Ozone Exposure Are Augmented in Obese Mice: Role of Innate Immune System.”

Shore opened with the observation that obesity is a risk factor for asthma, and weight loss improves asthma outcomes.

Pointing to the usual suspects, Shore expanded the IL family list to include more members that contribute differently to ozone in obese versus lean mice. She also reported that obesity changes the baseline for how well animals responded to treatment for lowering the levels of ILs and related metabolites. “What we see is a very different effect of interventions on lean and obese mice,” she said.

Shore concluded by underscoring the importance of including obesity as a consideration in respiratory studies.

Mice that age slowly and with grace

When the subject turned to Eling’s lean and mean transgenic mice, the news was almost entirely promising. Eling has spent most of his career studying nonsteroidal anti-inflammatory drug-activated gene (NAG-1), initially for its role in programmed cell death and tumor formation and progression in cancer.

Underscoring NAG-1 as a novel protein with potential therapeutic uses in disease such as obesity, he concluded, “All these are the characteristics of a mouse that’s going to live longer.… There is a profound effect on longevity.”

The Inflammation Faculty is an interdisciplinary, cross-division initiative that brings together scientists from in-house research labs, scientific grants administration, and the National Toxicology Program to advance understanding of inflammation-related disease processes. As one of its activities, the group is sponsoring leading-edge seminars.

Inflammation is one of the areas identified as a priority in the 2012-2017 NIEHS Strategic Plan.

The next seminar in the series will take place Dec. 11 and highlight “Methods at NTP to Identify Biomarkers of Inflammation.”

Individuals interested in the faculty or with needs for accommodation to attend seminars should contact Nina Jaitly, M.D., at (919) 541-7854 or inflammation@niehs.nih.gov .