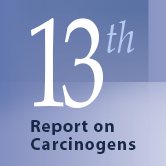 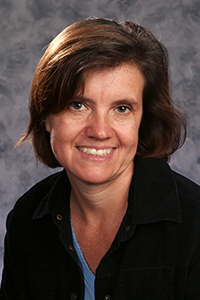 Ruth Lunn, Dr.P.H., directs the NTP Office of the Report on Carcinogens, which is responsible for the scientific evaluation process and preparation of the report. (Photo courtesy of Steve McCaw)

U.S. Department of Health and Human Services Secretary Sylvia Burwell released the 13th Report on Carcinogens Oct. 2 in Washington, D.C. Four substances were newly reviewed for this edition, which brings the cumulative report to a total of 243 listings. The new substances include ortho-toluidine, 1-bromopropane, cumene, and a pentachlorophenol mixture.

One substance newly listed as a known human carcinogen

Since 1983, ortho-toluidine has been listed in the Report on Carcinogens as reasonably anticipated to be a human carcinogen. New cancer studies led NTP to reevaluate and reclassify ortho-toluidine as known to be a human carcinogen, based on studies in humans that showed it causes urinary bladder cancer. Ortho-toluidine is a synthetic chemical produced in other countries that is imported to the U.S. in high volumes by several companies. It is primarily used to make rubber chemicals, pesticides, and dyes. It is also used in some consumer and medical products.

Three substances added as reasonably anticipated to be a human carcinogen

The chemical 1-bromopropane is a solvent widely used as a cleaner for optics, electronics, and metals, as well as a solvent for aerosol-applied adhesives, such as those used in foam cushion manufacturing. It is also used in dry cleaning and solvent sprays for aircraft maintenance. Workers in certain occupations may be more exposed to 1-bromopropane than the general population.

Cumene, a natural component of coal tar and petroleum, is used primarily to make acetone and phenol. It is also found in tobacco smoke and emissions from petroleum products. People are mainly exposed to cumene through the environment and in workplaces that use or produce cumene.

The listing of pentachlorophenol and by-products of its synthesis addresses a complex mixture of chemicals used as wood preservatives. In the U.S., pentachlorophenol has been regulated since the 1980s as a restricted-use pesticide. It is used industrially for treating utility poles, wood pilings, fence posts, and lumber or timber for construction.

“This report provides a valuable resource for health regulatory and research agencies, and it empowers the public with information people can use to reduce exposure to cancer-causing substances,” said NIEHS and NTP Director Linda Birnbaum, Ph.D.

A listing in the Report on Carcinogens does not by itself establish that a substance will cause cancer in an individual. Many factors, including the amount and duration of an exposure, and an individual’s susceptibility to a substance, influence whether a person will or will not develop cancer. 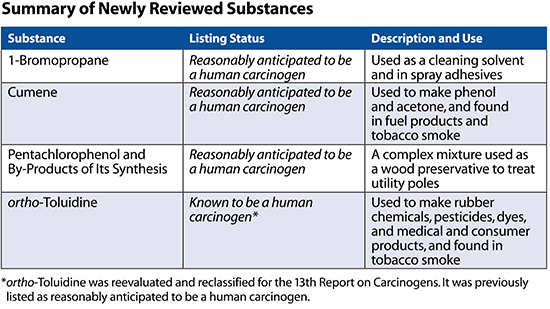