Winning the National Institutes of Health (NIH) Fellows Award for Research Excellence (FARE) is a boost for any trainee’s career, but for young female FARE winners, receiving an NIH Women Scientist Advisors Committee Scholar Award means being named one of the best of the best.

Committee members put the FARE winners through a rigorous selection process. “Abstracts that were well written and told an interesting story rose to the top,” wrote chair Judith Kassis, Ph.D. “We were very impressed with Barbara's abstract.”

The advisors honor two to three female FARE award winners each year at the annual NIH Research Festival, and again at a Scholars Symposium in the spring, where awardees have the opportunity to present their research and meet with committee representatives and senior NIH leadership.

A select group of young scholars

Nicol joins former trainee Anne Lai, Ph.D., who won for her 2012 FARE study (see story), as part of the group of 12 committee scholars named since the award’s initiation in 2010. NIEHS trainees have received a disproportionate number of the awards, rivaled only by the much larger National Cancer Institute and National Institute of Allergy and Infectious Diseases, which have also had two winners each.

“I was really surprised,” Nicol said modestly. “I’ve been here for just two years, and I feel that I’ve not done enough to earn this award… [And] there are so many bright postdocs here at NIEHS who are also FARE winners.”

For his part, Yao was not at all surprised by Nicol’s performance. “Barbara has been very creative, and this is not an easy project,” he said. “She took it and made it into a very interesting story.”

Yao emphasized the importance of this kind of competition for encouraging young women trainees to persist in their pursuit of scientific careers, a sentiment echoed by National Toxicology Program toxicologist Cynthia Rider, Ph.D.

“As one of the NIEHS representatives to the NIH-wide committee, I value the work that the committee does to bring awareness to the challenges that face women in science and to highlight the achievements of women throughout NIH,” she wrote. “One such achievement that we are particularly proud of is that of Bar bra Nicol, who was selected as a scholar out of a pool of talented women scientists.” 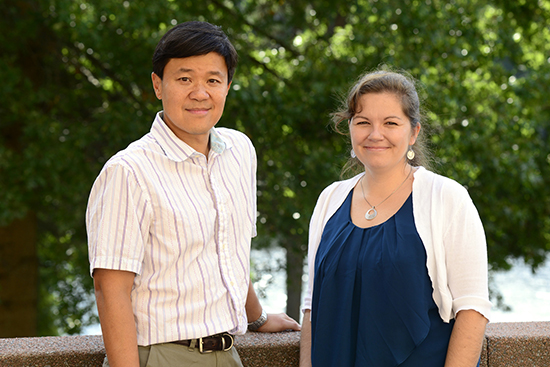 Nicol, right, is one of several trainees in Yao’s group who have been honored for their research in reproductive biology. In addition to Nicol, this year’s FARE winners (see story) included another of Yao’s postdocs, Erica Ungewitter, Ph.D., who also won last year. (Photo courtesy of Steve McCaw)

Nicol’s study stood out in large part because of its divergent approach to understanding the genetic defects that lead to sex reversal at birth or infertility, which are often the result of differentiation impairment of gonads during fetal life. Her findings shed new light on the complex antagonisms between pro-ovary and pro-testis pathways and challenge prevailing opinions about the role of specific proteins.

In contrast to earlier studies, hypothesizing that testis differentiation was a result of a direct induction by Sox9, Nicol determined that the picture is more complex, requiring both Sox9–dependent and Sox9–independent morphogenetic changes. “This [finding] leads to a provocative hypothesis that in addition to stimulating Sox9 expression, Sry [the testis-determining gene] may also induce other unknown pro-testis genes,” Nicol wrote.

Sex reversal phenotypes in humans can mean enormous human costs in terms of intersex anatomy and emotions. More research along the lines of Nicol’s work could ultimately help scientists discover some way to intervene to improve the personal and reproductive lives of those affected by sex reversal.