A plan for revolutionizing toxicology testing for the 21st century 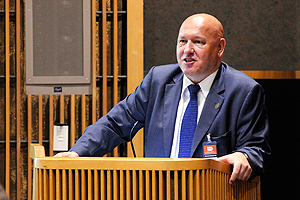 Hartung said the threats involved in terrorism and warfare helped to boost interest in organotypic cultures, because of the inadequacy of animal models. “It is an area which is producing a lot of excitement about making cell systems better and standardizable, so they can be used for some kind of testing.” (Photo courtesy of Steve McCaw) 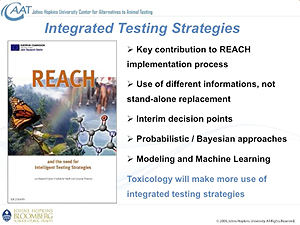 According to Hartung, REACH, with its prioritization of alternative test methods, has raised awareness of what ITS has to offer predictive toxicology. (Photo courtesy of Thomas Hartung) 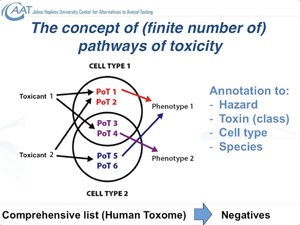 Hartung envisions the integration of PoT for hazard identification, as well as for identifying compounds that may be useful in safe-by-design efforts. (Photo courtesy of Thomas Hartung) 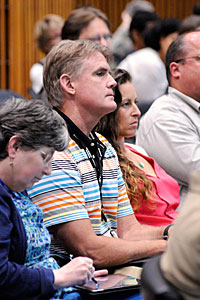 Not surprisingly, Acting Director of the NTP Interagency Center for the Evaluation of Alternative Toxicological Methods Warren Casey, Ph.D., center, and other NTP scientists with interests in alternative test methods and predictive toxicology, were on hand for Hartung’s talk. (Photo courtesy of Steve McCaw)

“The difficulty lies not so much in developing new ideas as in escaping from old ones.” — John Maynard Keynes

While this quote concluded the July 17 NIEHS Office of the Director seminar by grantee Thomas Hartung, M.D., Ph.D., it expressed the overarching theme of his presentation, “The Human Toxome, Evidence-Based Toxicology, and Integrated Testing Strategies — Additions to the Toolbox of 21st Century Toxicology?” The talk was hosted by NIEHS and NTP Director Linda Birnbaum, Ph.D., who described Hartung as one of the leaders in the field of predictive toxicology.

Hartung discussed a three-pronged approach for the future of toxicology testing, utilizing organotypic cultures, pathways of toxicity (PoT), and integrated testing strategies (ITS). This 21st century toxicology toolkit seeks to revolutionize the field, opening up avenues for biomarker identification, the identification of nonhazardous chemicals, and greener design through predictive toxicology.

Hartung has won several international awards for his work on alternative testing strategies. Head of the European Centre for the Validation of Alternative Methods from 2002 to 2008, he currently holds joint appointments at Johns Hopkins University (JHU) in Baltimore and the University of Konstanz in Germany. Hartung also serves as the Director for the JHU Center for Alternatives to Animal Testing.

His background in pharmacology and toxicology inspired Hartung to lead the shift in toxicology testing away from animal and single-cell studies, toward a systematic approach centered on validation and pathway analyses. Through this approach, he hopes to develop a human toxome that integrates information and serves as a reference for the toxicology field.

Hartung’s approach takes concepts from evidence-based medicine and applies them to toxicology testing. Evidence-based medicine uses a three-pronged approach to make vast amounts of data accessible to the medical community, by systematically reviewing the literature, weighing the quality of the information, and performing meta-analyses to statistically evaluate results from different studies. As part of the Evidence-based Toxicology Collaboration, Hartung has adapted this approach to toxicology testing, focusing on organotypic cultures, PoT, and ITS.

As Hartung explained, the premise behind the development of organotypic cultures is that validated animal models for toxicology testing are not readily available, necessitating the development of alternative testing strategies. One strategy, the Human on a Chip, cultures multiple cell types on a chip with compartmentalized microenvironments. While there is much interest in this particular technology, Hartung cautioned that it would not solve all of the issues of toxicology testing. Thus, there is more work to be done to develop alternative testing strategies.

The crux of Hartung’s approach is to strengthen the predictive power and validation of tests, by utilizing overlapping strategies and integrating them. “ITS are very much the baby of REACH," said Hartung, “The REACH ( registration, evaluation, authorisation, and restriction of chemical substances) legislation … requires that animal tests are only used as a last resort, but that all other information sources are used … which requires some integration. Toxicology of the 21st century will make more and more use of ITS.”

The final arm of Hartung’s approach, which is used in his laboratory, uses PoT to develop the human toxome (see text box). The theory behind PoT is that a particular chemical, in the same experiment, may not always affect the same genes, but will affect clusters of pathways. These pathways are analyzed to determine the hazardous or nonhazardous impact of the chemical. The resulting pathways of toxicity are then annotated and assembled to form the human toxome.

As Hartung explained, this approach to toxicology testing is like starting to drive a car while building it on the road. Although this revolution is in its early stages and much work remains to be done, Hartung said great progress has been made in the development and implementation of the toolkit, with the ultimate goal of improving human health.

As part of a multi-institution NIH Transformative Research grant, Hartung uses standardized in vitro cell culture protocols to generate omic datasets that can be used to develop software tools for analyses to identify PoT.

In his experiments, Hartung treats MCF-7 breast cancer cells with estrogenic compounds, and determines their metabolome and transciptome. Using newly developed software, his group, in collaboration with Agilent, has identified pathways that are impacted by the estrogenic compounds. The identified pathways are in agreement with the known roles of estrogen signaling in MCF-7 cells. Hartung said he plans on validating the system using other cell lines, such as T47D breast cancer cells, and expanding the panel of compounds used in the assay.

While these current experiments have not identified novel pathways, they have provided a means by which to develop the protocols and technologies necessary for future experiments. As Hartung explained, “These experiments are sharpening the tools for pathway identification.” He hopes that these will be some of the first studies towards the development of the human toxome.